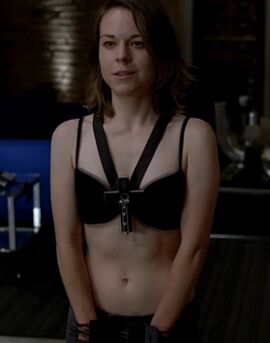 "Now, if you guys could take your shirts off for me, that'd be great."
―Molly[src]

Molly is a vampire on the HBO original series True Blood. Played by American guest starring actress Tina Majorino, Molly makes her debut on the episode "Whatever I Am, You Made Me", in the series' fifth season. Working for the Vampire Authority, and outfitting Eric Northman and Bill Compton with wireless control harnesses called iStakes, later revealed to be an invention of her own ingenious design. Molly plays a recurring role through the same season, and meets an untimely demise in the Season 5 episode "Gone, Gone, Gone".

Molly was turned in her 20s.

"So if you try to do something stupid like attack me, or try and run away or whatever, Click and Splat."
―Molly, to Bill Compton and Eric Northman[src]

Molly instructs Bill and Eric to remove their shirts and places a device on them called the iStake. It is firmly strapped around their torsos and centered over their hearts. Molly tells them that the indestructible devices will pierce their heart faster than a bullet with the click of an application on her iPhone. She warns that attempting to remove the iStake will also trigger it. ("Whatever I Am, You Made Me")

Salome Agrippa asks Dieter Braun to notify Bill and Eric they have until dawn to find Russell Edgington. After a little bit, while driving in a van with Sookie, Alcide, and Eric, Bill's iPhone rings and it's Molly on her bluetooth. She explains that they have until sundown to locate Russell or their iStakes will deliver them the true death. As she gets on an elevator, she states that if they don't make it in time, it's been great serving them. ("Let's Boot and Rally")

Upon Bill and Eric's return to Authority headquarters, Molly is seen in the Chancellors' lounge, celebrating Russell's capture. ("Hopeless")

After Roman is staked which resulted in his true death and Russell re-apprehended, Molly is heard yelling out loud that she doesn't understand why the iStakes didn't work. Molly is thrown in the lock-up in the cell next to Bill and Eric. She has been allowed to keep her equipment and is trying to figure out why Russell's iStake malfunctioned. Molly denies being a Sanguinista when Bill asks. She is later absent from Salome's ceremony, though it's not clear whether this is due to political reasons. ("In the Beginning")

Molly is seen trying to leave the Authority HQ to escape the Sanguinista takeover but the security mechanism does not take her blood to clear her. Chelsea, the secretary, explains that only those with "Level 1" protocol have clearance. She returns her briefcase to a room where she is confronted by Eric. Eric asks if there is a safe place they can talk. She turns off the security cameras and states they only have thirty seconds before the cameras reactivate. She frantically asks Eric if he has a plan of escape. His response is, "You were it." Molly says that she only has "Level 3" clearance and the security is DNA specific and the plan she has will probably get them killed.

Eric joins Molly in the main lobby of the Authority HQ and Molly turns off the security cameras. After Eric drugs Nora Bill appears. The elevator opens to reveal Salome and her guards. Eric, Nora, and Molly are taken away by the guards. ("Everybody Wants to Rule the World")

Molly is brought out with no shirt or shoes wearing only pants and a bra. She is bleeding and has signs of being tortured. She has an iStake strapped to her chest. Salome gives Molly one last chance to denounce mainstreaming and accept Lilith. Molly refuses and states that even if she did accept Lilith she would be killed anyway. Bill confirms this. Molly responds by saying, "Fuck all of you" and explains how they are not evolved. Bill activates the iStake shortly thereafter resulting in her true death in a pool of blood and muck. Salome and the other chancellors then "bless" Molly's blood. ("Gone, Gone, Gone")