Bill must suddenly lay claim to Sookie in order to protect her from a cadre of his vampire acquaintances. At Merlotte's, Sam and Tara seek refuge from their respective problems, and Jason asks Lafayette for medicinal help. Dawn is found dead in her bed after an intimate encounter and falling-out with Jason.

Sookie arrives at Bill's house to give him some electrician's phone numbers that were willing to come out at night. Sookie sees a car she does not recognize, with obvious vampire bumper stickers and license plate. Malcolm and Diane answer the door and are standing in front of Sookie blocking her entrance into the house. Sookie asks if Bill is home when Liam comes up behind Sookie rolling his eyes back into his head and baring his fangs. They try to glamour her but she informs them that glamouring doesn't work on her. As they let Sookie into the house, she repeatedly asks to see Bill. While inside, they ask Sookie personal questions and at one point even try to bite her which leaves her completely terrified. Before the vampires can feed, Bill interrupts them and says "Sookie is mine!", making them immediately halt. Malcolm goes to his fangbanger, a young man named Jerry.

Liam calls over his female fangbanger Janella Lennox, and proceeds to receive oral sex. Diane is upset and very annoyed that she cannot feed from Sookie which leads her to have a go at Bill. It appears she and Bill had a past. Sookie reads Jerry's thoughts and hears him say he has Hep D as Bill was about to feed from him.

As she announces it to the room, Jerry attacks and tries to choke her. Bill intervenes and breaks Jerry's wrist. The vampires stop immediately as they are curious to how Sookie knew Jerry's secret. The three vampires soon leave and take their fangbangers with them. After they have left, Sookie is visibly distraught and leery of what just occurred. She asks Bill what Hep D is and he explains to her. He explains it is harmless to humans but weakens vampires for several months which puts them in danger of being harmed or killed. Sookie gives Bill the electrician's number and quickly leaves.

An upset Sookie drives home. Using his vampire speed, Bill arrives there first. Startled by his sudden arrival, Sookie tells Bill they shouldn't see each other anymore. She explains that he keeps putting her in danger. First with Mack and Denise and then with his vampire guests. He tells her that she will never find anyone more suited than him, as he is the only one she can find peace with.

Dawn comes home from work and notices that Jason is not tied to the bed any more. Rushed from behind by a masked man, Dawn seems a bit excited until the masked man says he killed Jason. Dawn begins to scream loudly, and Jason quickly reveals himself as the masked man. At first angry, Dawn quickly forgives Jason and soon begins kissing him.

During foreplay, Jason cannot get an erection, which leads to a fight between the two. Dawn tells him to get out of her house and grabs her gun. Jason, assuming Dawn was joking, hears a warning shot and is told to get out once again after she threatens to shoot him. He leaves, but not before Dawn's neighbor overhears the fight and sees Jason angrily leave Dawn's house.

Tara and Sam are seen at Merlotte's. As they drink and talk about their personal lives, they both reveal they haven't had sex in months. Tara suggests the two should have sex and sleep together, a one time fling for fun. Sam, concerned it would make their work relationship awkward, eventually gives in to Tara's request and the two have sex.

Sookie, asleep in bed that night, begins to have an erotic dream about Bill. She awakens, and cannot get back to sleep. Bill visits the three vampires from the previous night and soon gets mocked for living a Mainstream life. They tell Bill they killed both Jerry and Liam's fangbanger in horrific manners. The next morning, Sookie is mowing the lawn when Gran comes out to ask what she is doing. Sookie tells Gran she couldn't sleep and has been working since dawn. Gran tells Sookie to come inside and join her for breakfast to cheer her up a bit.

Tara comes home and sees her mother, Lettie Mae, drunk in the living room. Questioning her mother's actions, Lettie Mae cries and says she needs Jesus to help her. Drunk and belligerent, she hits Tara in the head with a liquor bottle. Tara leaves her mother's home and goes to her cousin Lafayette's house. As Tara and Lafayette spend time together, Tara finds out that Lafayette is now working as a prostitute, as one of his customers leaves soon after she arrives.

Sookie and Gran are sitting at the table eating breakfast when Sookie tells Gran she is apprehensive of her own personal relationship with Bill. Sookie explains that she fears a relationship because he is a vampire, yet suggests that maybe she is scared simply because she cannot read his mind.

Meanwhile, Jason visits Lafayette's house and asks him if he can buy Viagra. Lafayette informs him he does not sell it, but that he does sell something better, V. He tells Jason that the V will give him an erection, as well as the best sex he and his partner have ever had. Jason cannot afford to pay for the V, so Lafayette agrees to let Jason dance for it. Stripping down to his underwear and wearing a Laura Bush mask, he begins to dance for Lafayette's video camera. Tara snoops and gives a curious eye to Jason and Lafayette's antics.

During the day, Sookie goes to Bill's house. Sitting on his porch stairs, she begins to privately masturbate. She is interrupted however when her cell phone rings. Sam calls Sookie and asks if she will go to Dawn's house and check on her. Sookie drives to Dawn's and knocks on her front door. When she gets no response, she walks though her house and goes into her bedroom. Sookie finds her on her bed and at first she thinks she is sleeping but then as she walks closer to her she begins to realize that she is dead. After that she lets out a sudden scream as the episode ends. 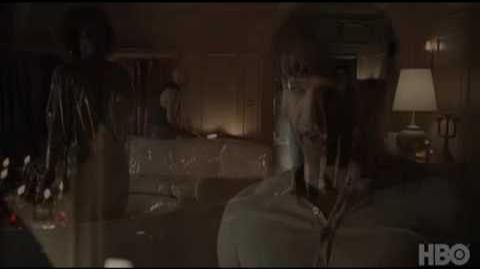 Liam McKnight: "Someone needs to get down on my Johnson."

Sookie Stackhouse: "STOP HE HAS HEP-D!"

Sookie Stackhouse: "Bill, night before last I had to bury my bloody clothes because I didn't want my grandmother to find out I was almost killed, and tonight I was almost killed again! Why on earth would I continue seeing you?"
Bill Compton: "Because you will never find a human man you can be yourself with.