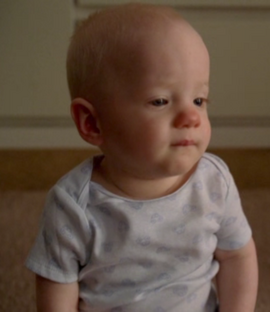 Mikey Bellefleur is the son of Arlene Fowler Bellefleur on the HBO original series True Blood. Played by Grant & Wyatt Ollivier, a set of American twin co-starring baby actors who take turns playing Mikey's role, Mikey makes his debut on the episode "She's Not There", at the beginning of the series' fourth season. A medium, Mikey is the son of Arlene Fowler Bellefleur and Drew Marshall, and brother to Coby and Lisa Fowler. Playing a recurring role through the series' fourth, sixth and seventh seasons, Mikey was last seen in the series' finale episode, "Thank You", in the series' seventh, and final, season.

When Arlene finds out she is pregnant she immediately calculates the months in her head. She knows that the baby's father would be her ex-fiancé Drew Marshall, also known as Rene. Worried the baby will be evil like its father, she tells Terry she doesn't want the baby. However, Terry tells Arlene he will stay by her side and raise the child as his own. Arlene, who feels abortion is wrong, nevertheless turns to her friend Holly Cleary, who performs a wiccan ritual that could terminate the unwanted pregnancy. Arlene wakes the next morning in a pool of blood, however, after a visit from Dr. Robideaux, he informs her the baby is still alive.

After Mikey was born, Arlene and Terry are raising him. No one else knows that Terry isn't the biological father. Arlene seems to believe something is wrong with her son, and continuously behaves nervously around Mikey. She is upset at the sight of Mikey having ripped the heads off Lisa's dolls. Arlene tries to instill in him that "killing is wrong." ("She's Not There")

The next day, they bring Mikey to work and he meets his "Aunt Sookie." Arlene is curious if Sookie can read his mind, but says she can't read babies' minds. Arlene gets increasingly irrational after Sookie calls Mikey an "old soul," and storms off, assuming she was referring to Rene. Later, after looking into Mikey's eyes, Arlene mysteriously has a blood vessel pop in her eye. ("You Smell Like Dinner")

Jessica Hamby gives Mikey an old creepy doll, that she and Hoyt have not been able to get rid of. Mikey plays with it while sitting in his playpen at Merlotte's. ("If You Love Me, Why Am I Dyin'?")

One evening, as Arlene and her two children are asleep in front of the TV, Terry walks in with Mikey and proceeds to ramble off all the great things he will teach his son when he's all grown up. Terry leaves momentarily to retrieve the laundry from the dryer, and upon returning finds that Mikey has written "BABY not Yours" on the wall in red marker. Terry lets out a scream that awakens Arlene who then screams as well upon seeing the message. ("I'm Alive and on Fire")

Days after seeing the message, Terry and Arlene call for Reverend Daniels and his new wife Lettie Mae Daniels to banish any evil from their home as Arlene yells out to Drew Marshall that he is not getting Mikey. However, one night while Terry and Arlene are in bed, a book of matches bursts into flames near them. Following these events into "I Wish I Was the Moon" the small flame spreads and Arlene and Terry are woken up by a fire. They rush outside with Lisa and Coby not knowing where Mikey is. Just after they get out the house explodes to Arlene's horror. But Mikey is sitting safely on the front lawn with the strange old doll. By now, Terry and Arlene are certain that Drew is trying to kill them from beyond the grave. But Mikey has been communicating with something much different,the ghost of an African-American young woman named Mavis. ("Me and the Devil")

Lafayette Reynolds, working in the kitchen at Merlotte's, plays peek-a-boo with Mikey by holding a fan over his face. He noticed Mikey staring at something behind him. When he turned around he was shocked to see a woman waving at Mikey. The woman seemed just as shocked that Lafayette could see her and puts a finger to her lips as if to tell him to be quiet. As he tried to talk to the woman to find out why she was there and tell her to get out, she started singing to Mikey and walking toward him. As she reached out to Mikey, Lafayette yells and scares Arlene. The woman disappears and leaves Lafayette stunned. ("Cold Grey Light of Dawn")

Arlene comes into the kitchen at Merlotte's. She sees Mikey left unattended in his playpen and starts yelling at Terry, who is on duty cooking. She tells him that he can't take his eyes off of Mikey for a second, with Drew's spirit hanging around. Terry points to a mirror that he has placed over the grill, and tells her that he is watching him as he cooks. While they argue, Mikey stares at Mavis, who has come over to the playpen to be with him. Mavis starts singing to him again. Lafayette walks in the door and sees them together. Mavis stares at Lafayette and he curses and hurries back out the door. ("Spellbound")

While Arlene and Terry sleep at their house, Lafayette walks into their bedroom having been possessed by Mavis. Lafayette goes over to Mikey, picks up both him and the doll and leaves. ("Spellbound")

Mavis takes Mikey to Hoyt's house. They walk in and she welcomes the baby home; it was her house while she was alive. Hoyt asks why Lafayette is there and why he has Mikey. Mavis pulls a gun and tells Hoyt this is her house.

Hoyt runs out the door without his pants and he calls for help. When Sheriff Andy Bellefleur and Deputy Jason Stackhouse arrive, Mavis tries to shoot them. Jesus Velasquez comes by after being called by Arlene and talks Mavis out. She gives Mikey back to Arlene and Terry. Jesus says that he can help Mavis. They find the grave where Mavis and her baby were buried and dig up their remains. Jesus hands Mavis the dead child and performs a ritual to free her spirit. ("Let's Get Out of Here")

"In the Evening"[edit | edit source]

Mikey is sitting with the rest of his family in the 2015 Thanksgiving Dinner scene. ("Thank You")

Retrieved from "https://trueblood.fandom.com/wiki/Mikey_Bellefleur?oldid=143678"
Community content is available under CC-BY-SA unless otherwise noted.