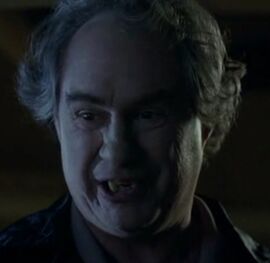 Mike Spencer was the Bon Temps funeral home director and coroner turned vampire on the HBO original series True Blood. Played by American guest starring actor John Billingsley, Mike made his debut on the episode "The First Taste", in the series' first season. Playing a recurring role through the series' first, second, third, and fifth seasons, Mike fantasized about being with series' protagonist Sookie Stackhouse, and met an untimely demise in the Season 5 episode "Gone, Gone, Gone".

Mike was a loner, although he could talk if the topic interested him, as seen in Bon Temps.

As a coroner, his sense of humor often had a macabre tone. This caused weird looks from time to time.

After turning into a vampire, he seemed to possess little to no self control. He demonstrated this when he spoke about his adoration of Sookie Stackhouse, but tried to feed from her at the same time.

Mike Spencer was seen frequently in this season due to the volume of deaths. He was first seen at the site of The Rattrays' overturned trailer when Sookie Stackhouse went to investigate. He was next seen at the murder of Dawn Green, with his assistant Neil Jones. Mike's next appearance was at the murder of Sookie's grandmother, Adele Stackhouse. Mike's thoughts during this scene upset Sookie so much that she had to go outside. Next Mike was seen at the explosion of a house owned by a nest of vicious vampires (Malcolm, Diane Hardwicke and Liam).

It was thought that Bill was in a fourth coffin in this house, but the body turned out to be human. Mike was devastated to discover that it was the body of his assistant Neil Jones, who unknown to him, was a fangbanger.

At the end of Season 2 he was in Sookie's house, under Maryann's influence, which had also been occupied by Maryann. When Sookie was trying to sneak into her home unnoticed, Mike grabbed Sookie's leg and asked her if she remembered when her grandmother was "all bloody and dead" on the floor. Mike then screamed until Sookie "agreed" to have sex with him. However, Sookie knocked him out with a frying pan and proceeded to help save Bon Temps. ("Frenzy")

After Maryann's death, Mike, like the rest of the townspeople, had no recollection of the events that occurred. ("Beyond Here Lies Nothin'")

Mike comes and takes Eggs body after he is killed. Two days later he calls Tara to let her know that Eggs` funeral is about to take place. When Tara arrives, the only other persons attending are Mike and Sookie, who paid for the arrangements. The same day he is called to pick up a headless body found in the ditch. ("It Hurts Me Too")

Mike aids the police in investigating the murder of Suzanne McKittrick and Emory Broome. ("Let's Boot and Rally")

Mike aids in the investigation of the shooting of Junior at the Stake House. ("In the Beginning")

Sookie reveals that Mike was standing behind her "thinking about sucking her toes" while they were in line at the bank.

Shortly after the Tru Blood factories are destroyed, and vampire attacks on humans increase, Mike appears at Sookie's front door. Concerned for his safety, she invites him inside. He then reveals himself to be a vampire, turned as part of the Vampire Authority decree that more vampires must be created. He overpowers her, but Sookie is able to stake him (using a pair of chopsticks from Chinese take-out) while he is feeding on her. ("Gone, Gone, Gone")

After his transformation, Mike possessed the common strengths and weaknesses of a vampire. Sunlight would slowly kill a vampire of his young age

Retrieved from "https://trueblood.fandom.com/wiki/Mike_Spencer?oldid=141437"
Community content is available under CC-BY-SA unless otherwise noted.