Me and the Devil

"Me and the Devil" is the fifth episode of Season 4 of the HBO original series True Blood, and the series' forty-first episode overall.

"You are incapable of love...
You are damned!"
― Godric

Eric watches Sookie sleeping and turns to see Godric standing next to him. Godric begins to run his hand along Sookie's body, and Eric stops him, saying "Don't touch her." Godric demands that he drink from Sookie. It turns out that Eric is simply having a dream. Sookie wakes to ask Eric what the hell he's doing. He states he's had a bad dream.

Bill gets a late visit from Portia. She continues to want a relationship with him, despite the fact they are related. Bill glamours her into screaming and running away every time she sees his face.

Eric is comforted by Sookie in her bed. He lays his head in her lap while she strokes his hair. Sookie lets him stay in her bed until sunrise. He puts Sookie's arm around his chest.

Pam visits Bill and insists that he helps find Marnie to reverse the spell cast on her face.

Tara says she is leaving for New Orleans, and hugs Lafayette goodbye. Tara calls Naomi, who questions her about the mail she received from the Social Security Administration addressed to "Tara Thornton", considering Tara told her that her name was "Toni."

Tommy pulls up to Sam's trailer and shows him the bodies of Joe Lee and Melinda in the van. At work, Sookie confronts Holly about her witch group. She reads her mind and gets information about Marnie and the Moon Goddess Emporium.

Jason eats breakfast with Hoyt at Merlotte's. He talks to Hoyt, telling him how he was raped, and that maybe it was God's punishment for all the casual sex he had enjoyed. Holly barks at Sookie for supposedly taking her eggs and mentions a full moon, which Jason balks at.

Sookie goes to the Moon Goddess Emporium and finds Marnie. She tells her that she wants a reading. During the reading, Sookie hears Gran. She warns Sookie to stay away from Marnie and to run away quickly. Sookie heeds the advice and leaves abruptly.

Sam is pulled over while trying to help Tommy get rid of the dead bodies in the van. Andy sees blood on the door and makes Sam open the back of the van. Tommy has shifted into an alligator, which Sam says he found near some dumpsters and was bringing to the swamp.

Marnie walks to the backroom and finds Katerina Pellham. Marnie is apprehended. While locked in a cell, Marnie has another vision of Antonia. Bill confronts Marnie and glamours her. He finds out that Marnie truly doesn't know how to reverse the spell she cast, leaving Pam's face hideously deformed.

Tara tells Sookie about Naomi, her girlfriend in New Orleans. They are hanging out in Sookie's living room and eating ice cream. At sundown, Eric emerges from his cubby and Tara is startled. She grabs a fire poker and yells at Sookie for having him in her house after everything Eric had done to everyone. She furiously runs off, and Eric is left surprised at the atrocious things he has done.

Lafayette and Jesus pull up to his Jesus' grandfather's house. There is a young, beautiful pregnant woman outside. As they approach the house, his grandfather appears and claims he's been expecting him.

Alcide has a knock at his door. A new Packmaster named Marcus Bozeman is angry that Alcide hasn't registered with the pack. Alcide makes him leave.

Sam and Tommy drag the bodies of Joe Lee and Melinda into a swamp. Sam tells Tommy that he has killed before also. Sam throws some marshmallows into the water, and the gators begin to eat the bodies.

Arlene and Terry finish making love. Terry notices how quiet the house is. They lay in bed and tell each other how much they mean to one another. A pack of matches ignites on their dresser.

Jason begins to have a sexual dream about Jessica. During the dream, Hoyt appears. Jason can't make him leave, and eventually wakes disturbed.

Eric knows he is capable of extreme cruelty. Sookie tells Eric she likes him. He says there is a beautiful light in Sookie and he couldn't bear it if he snuffed it out. He gets up and leaves the house. As Eric is walking off, Sookie runs on her porch and calls for him, "Please don't go." He returns to her with open arms and they kiss.

Bill is with the four remaining Sheriffs of Louisiana. Duprez is sarcastic about the situation, and Bill attacks him. He tells Luis Patiño to enlighten him. Luis tells them of vampire priests, including his maker, who was killed by a witch (Antonia.) While being burned at the stake, she forced every vampire within 20 miles into the daylight, where they all perished. The sheriffs want to kill the witch, but Bill tells them the AVL has prohibited any violence. Angry, Pam yells out about what the witch had done to her and blurts out about Eric's memory loss. Bill demands to know where Eric is and Pam tells him he is at Sookie's house. 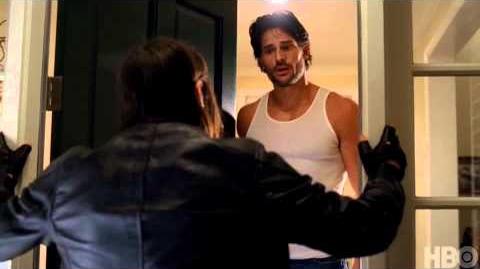 Adele Stackhouse: (Gran's voice heard by Sookie whilst she is with Marnie) "Sookie! Sookie, I know you're listening, it's Gran. Sweetheart this woman poses great danger, get away from her. Run Sookie run! Get out now!"

Arlene Fowler: "I've been praying to him every night, but apparently my prayers go straight to His voice mail."

Godric: (to Eric) "You are incapable of love. You are damned... You cannot be saved. You are a creature of death and the living are good for only one thing, and it is not love. Drink."