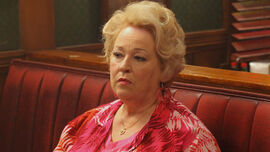 "I simply object to a girlfriend who will kill you and eat you! I think that's reasonable!"
―Maxine Fortenberry, to her son, Hoyt Fortenberry[src]

Maxine Fortenberry was the mother of Hoyt Fortenberry on the HBO original series True Blood. Played by American guest starring actress Dale Raoul, Maxine makes her debut on the episode "Escape from Dragon House" in the series' first season. Playing a recurring role through the series' first, second, third, fourth, fifth, sixth, and seventh seasons, Maxine met an untimely demise on the episode "Fire in the Hole" in the series' seventh, and final, season, and appears once more, in a flashback in the Season 7 episode "May Be the Last Time".

Maxine Fortenberry was a resident of Bon Temps, Louisiana, and the overbearing mother of Hoyt Fortenberry. She was extremely prejudiced against many people, particularly vampires. This is in stark contrast to Hoyt, who is remarkably progressive and broad-minded.

Despite her hateful personality, Maxine was easily impressed by others and very susceptible to compliments. Although she hated vampires, she was quickly charmed by local vampire Bill Compton. She also believed herself adept at masking her hateful attitudes by appearing friendly and accommodating toward others. In truth, she was self-pitying, and very transparent in her desperation to portray herself as being more well-off than she was.

Maxine raised her son as a single mother, and was portrayed as being very controlling and emotionally manipulative of her only child. Even in his late twenties, she continued to treat Hoyt like a small child, including scolding him, cooking all of his meals, and dissuading him from moving out. Her inability to cut the apron strings finally came to a head when she adamantly opposed his relationship with the vampire Jessica Hamby. When Hoyt eventually did move out, her need to be someone's caretaker did not subside, and she temporarily replaced him with the injured shapeshifter Tommy Mickens.

Maxine is killed in the third episode of the seventh season. She joined a group of human vigilantes and shot Jessica in the shoulder with a wooden bullet. In retaliation, Violet Mazurski ripped out her heart.

Little is know about Maxine's background. She has alluded to being raised to be a bigot, but this may simply have been her way of foisting responsibility for her hateful attitude onto others.

She married Carl Fortenberry, who passed away approximately 18 years before the beginning of the series. She suspected that Carl may have been a closeted homosexual, but she based that on a stereotypical assumption that his love of dancing was "gay." They had one child together, Hoyt Fortenberry. Carl committed suicide when Hoyt was 10-years-old. Maxine finagled the insurance company with whom Carl had had a life insurance policy, and claimed that her husband had been murdered by a burglar. She repeated this same story to Hoyt, who grew up believing that she was too afraid to live alone because of an unknown assailant.("Frenzy")

Maxine lives with her 28-year old son Hoyt. She is overprotective and controlling of him. Many times Hoyt has been angry at his mother for still treating him like a baby despite his age. He threatens to move out at one point, but cannot bring himself to do so.

After Adele Stackhouse's death, Maxine turns up at Adele's wake with a casserole. Adele's granddaughter, Sookie hears her private disappointment that there is no blood left from the murder. She is one of the many residents of Bon Temps who thinks Sookie is responsible for her Gran's death.

Maxine's son Hoyt begins to date vampire Jessica Hamby. She is furious and tries to keep them apart by cutting off Hoyt's cellphone service. However he continues to date Jessica and even goes all the way to Dallas to see her. This only makes Maxine more furious.

When Hoyt returns from Dallas, Maxine tells him how disappointed she is with him. He gets angry and threatens to move out. Hoyt claims that Maxine is full of hate and prejudice. Desperate to keep her only son, she reluctantly agrees to meet Jessica. They meet at Merlotte's Bar and Grill and Jessica tries to be polite. Hoyt is angry when his mother is late, but Jessica defends her.

Maxine finally snaps and says Jessica is not right for her son. Maxine is not totally small minded and tells Jessica she is sorry that she was made a vampire against her will. She however continues her rant which makes Jessica cry. Hoyt is angry and tells her he is moving out. Maxine stays at the bar drinking beer after Hoyt and Jessica leave.

While in the bar Maxine is influenced by Maryann's spell. A while later, Hoyt and Jessica struggle to control a manic Maxine. To have her stay still they turn on the Wii for her. Under Maryann's spell she proceeds to tell her son exactly what she thinks of him calling him a "crybaby" and a "half-man" just like his father.

This angers Jessica who attacks Maxine. Under Maryann's spell, she doesn't seem to care about it, but Hoyt does. He breaks up with Jessica and takes Maxine home.

At home, Hoyt struggles to control Maxine who wants to go out. Angry that Hoyt is keeping her inside, she tells him the truth about his father. She tells him his father wasn't shot by burglars, but committed suicide. After Maryann is killed Maxine snaps out of the spell but can't remember anything. Hoyt asks her if it was true about his father and she confirms. Furious and feeling betrayed, Hoyt leaves, leaving Maxine alone.

It is revealed that Maxine has orchestrated a scheme to get her son Hoyt to move back in with her. She attempts to lure him through Summer.

Maxine, Summer and Hoyt's former school counselor prepare an "intervention" for Hoyt. He refuses to listen and leaves. Maxine is later seen buying a gun with silver bullets. ("Evil is Going On")

She has taken her shot at Jessica but fortunately missed. This has resulted in a much more permanent schism between her and Hoyt, who says "That woman is dead to me!" After a year Maxine seems to have moved on from her relationship with her son Hoyt. She focuses her energy in taking care of Tommy Mickens as he is healing from a gun-shot wound to his leg. They are seen having lunch in Merlotte's with Maxine making him dress clean cut. ("She's Not There")

Tommy is living with Maxine. She is helping him learn to read. She has him attempt to read something from a home shopping network ad. During one of her many calls to the home shopping channel, he answers the door to a prospector wanting to buy the natural gas rights on her property. Tommy keeps the news to himself. He goes to Sam with a plan to steal the proceeds from selling her rights. Sam is unimpressed, and urges Tommy to come clean. ("If You Love Me, Why Am I Dyin'?")

Tommy disappoints Maxine greatly after he abandons her without thanks. Behind her back Tommy tries to sell her house to a gas company under her name to get the money himself. Maxine quickly turns against Tommy and scolds Sam, telling him his brother is no good.

The witch Antonia casts a spell to make all vampires come out in the daylight. Maxine watches as her neighbor Beulah Carter inadvertently reveals herself as a vampire by meeting the sun. Despite having a running hose in her hand, Maxine makes no attempt to rescue her neighbor. She remarks that she "knew it". ("Cold Grey Light of Dawn")

Sam attends Tommy's funeral with Maxine. She tells him that, "While Tommy wasn't her flesh and blood, he was a son to her and [Sam] should call her 'Momma' from now on." ("And When I Die")

At Maxine's house Hoyt is trying to fix the sink. Jason shows up and tries to speak to Hoyt. He still won't talk to him. Jason says that instead of living with his mom, Hoyt can stay at his house, while he stays at Sookie's. Hoyt doesn't want any part of Jason's friendship anymore and kicks him out. On the way out, Maxine pretends to be mad at Jason. At the door however, she says thank you for splitting up Hoyt and Jessica and that she will even make him a pie. ("Authority Always Wins")

Hoyt is targeted by an anti supernatural hate group because of his relationship with Jessica. He is kidnapped and drugged but is rescued before being murdered. He is released from the hospital and his mother takes him home in her car. Maxine tells him that she has sold half of her doll collection to clear some space in Hoyt's old room. She says that she has bought a mattress from California King because it is good for Hoyt's size. Hoyt does not want his old room back. Maxine says she wants him back in the house because of the spate of vampire attacks since the Tru Blood factories were destroyed, referencing Jessica. Hoyt says Jessica is not coming back to him. He then says God has given him a second life and that he has been asked to join a drilling crew in Alaska. He thinks it's better than any job in Bon Temps. Maxine says that he's still recovering and Hoyt becomes annoyed. He asks her what she wants from him. Maxine does not answer and Hoyt deduces that she wants him to stay with her. Hoyt is not swayed from his decision and soon leaves Bon Temps. ("Gone, Gone, Gone")

Maxine, along with Jane Bodehouse, attends Terry Bellefleur's funeral. Sookie asks if the seats beside them are taken and Maxine tells her they are not. She asks how Hoyt is and Maxine states that he is doing fine and has found a new girlfriend. Maxine then says that she is "ugly as sin" but tells Sookie that at least she's not a red-headed blood-sucker. She and Jane then swoon over Alcide when he comes to talk to Sookie. ("Life Matters")

After Bellefleur's Bar and Grill is attacked by a group of Hep-V infected vampires, Maxine joins a mob of residents lead by Vince in an effort to reclaim Bon Temps. During this time, she is told by Vince that Sam is not fully human, something that Maxine claims to have suspected in the past. Later, the mob walks into the police station to take the guns from the armory. Additionally, they lock Adilyn Bellefleur into a cell as it is discovered that she is also not what she seems. Maxine appears unsurprised here as well, mentioning the abnormality of Adilyn's maturity rate. ("I Found You")

Now armed, Maxine follows the group as they attempt to force Sam and all other supes out of town. They initially encounter Sam and a vampire named Matt in the middle of a road. While he attempts to reason with them, Maxine and some others vocalize their feelings of betrayal in supporting a non-human politician and urge Sam to leave. Once the argument takes a violent turn, Matt is destroyed and Sam shifts into an owl and flees. The same night, the mob is approached by Jason, Jessica, Andy and Violet. Jason and Andy order the citizens to stand down, but they decline. Maxine targets Jason and Jessica (the latter in particular), believing that the pair of them made Hoyt abandon her. Unwilling to listen to Jessica's response, Maxine shoots her in the shoulder. Immediately after, Violet rushes up to Maxine and pulls her heart out. ("Fire in the Hole")

"Death is Not the End"[edit | edit source]

Hoyt returns to Bon Temps to view his mother's body, and to pack up her belongings from her house. ("Death is Not the End")

Retrieved from "https://trueblood.fandom.com/wiki/Maxine_Fortenberry?oldid=139598"
Community content is available under CC-BY-SA unless otherwise noted.