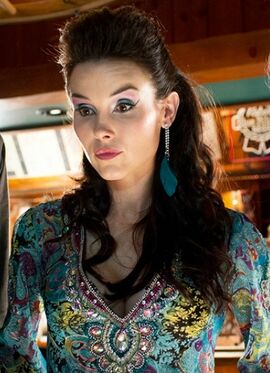 "She's 500, but she only admits to being 300, like you really couldn't tell she's halfway to being an elder."
―Claude on Maurella's age.[src]

Maurella is a Faerie on the HBO original series True Blood. Played by American guest starring actress Kristina Anapau, Maurella makes her debut on the episode "Soul of Fire" at the end of the fourth season. A recurring character throughout the fifth season, she is a Faerie that Andy Bellefleur met and made love to in the woods, eventually getting pregnant and giving birth to their four daughters. Maurella was last seen in the episode "Save Yourself" at the end of the fifth season.

Not much is known about Maurella's past other than the fact that she claims to have given birth 73 times in her life.

Maurella appeared in bright lights as Andy was walking home through the woods. Andy and she meet with surprise and she zaps Andy into unconsciousness. When he awakes she climbs on top of a horizontal Andy. She says she's sorry for zapping him but it's dangerous for her here and she must be very careful. She softly strokes his face, telling him that he is handsome, he blusters and says he's been watching his weight (in true Andy manner).

Maurella caresses Andy's face seductively and invites him to make love to her. Andy looks like he's dreaming and readily accepts her offer. But before he can, Maurella makes Andy promise to keep her safe and out of danger. Andy hastily agrees and makes a move to commence their interlude. She stops him and again insists he really truly promise her that he shall keep her completely safe in his world. She asks him to seal the promise and extends her hand towards him with a glowing light emanating from her finger, she puts his finger to hers and the light grows stronger. The two subsequently begin their intimacies and the scene fades out. ("Soul of Fire")

Andy visits the Hot Wings nightclub and recognizes Maurella. He wonders if he was dreaming their first night together and she assures him that he wasn't. He asks if this is a dream. She kisses him and asks what he thinks. Andy says he doesn't care and walks away with her. Their evening is interrupted when Jason Stackhouse recognizes his cousin Hadley Hale among the staff. He tries to talk to her and gets in a fight with the bouncers. Andy comes to his aid and they are both thrown out. ("We’ll Meet Again")

Sookie and Jason return to the fae club to enlist Claude Crane's help in deciphering a piece parchment covered in glyphs in an unknown language. Claude reveals the language inscribed is an ancient language that only an older faery can translate. They bring out a now pregnant Maurella, who they explain is 500 years old (though she only admits to being 300). Using a specialized technique (which she describes as a 'lost art'), she successfully translates the parchment which she reveals is a contract made by a Stackhouse ancestor promising his first fae-bearing female descendant to Warlow. ("Gone, Gone, Gone")

Maurella explains to Sookie, before she meets the Faerie Elder, about the elder's tendency to lose focus. Later, Maurella shows up at Merlotte's and explains to Andy that she is pregnant with his child. She goes on to explain the light pact he made with her and the he is responsible for her and their child's protection. If he ignores the light pact it would be seen as an act of war and would bring shame upon Maurella. ("Sunset")

Maurella goes into labor in Merlotte's bar, after ingesting an entire can of salt. This causes her "light [to] break" (similar yet different to a human's water breaking). During labor she appears to be in ecstasy and not pain. She gives birth to four hybrid children delivered by Andy's girlfriend Holly. She then immediately leaves the bar, calmly stating to Andy that it is his responsibility to take care of their children and make sure that "at least half of them make it to adulthood". ("Save Yourself")

Being a faerie, she has a vast array of fae magic, including photokinesis, and telepathy. Due to her age, she is much more powerful and skilled than other younger faeries. Claude comments that she is "halfway to being an elder." Maurella also possesses the ability to understand archaic versions of the fae language, though it is not clear if this is the result of a specific supernatural ability or just a greater knowledge base.