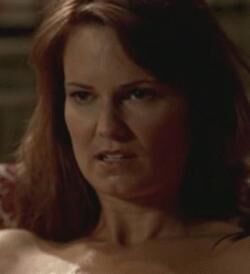 Maudette Pickens was a minor character on the HBO original series True Blood. Played by American actress Danielle Sapia, Maudette makes her debut in the series' premiere episode, "Strange Love", in the series' first season. A resident of Bon Temps, Louisiana, Maudette had a sexual encounter with Jason Stackhouse, and was the first victim of the Bon Temps killer. Maudette met an untimely demise on the same episode, in the same season, but, playing a recurring role through Season 1, she was last seen in a flashback, on the episode "You'll Be the Death of Me", at the end of the series' first season.

According to the books, she was sexually promiscuous, which Jason Stackhouse attributed to her loneliness. She is Sookie Stackhouse's age and worked at a gas station in Bon Temps. Maudette has a photograph in her house of herself and a man, presumably her significant other. Whether she is still in a romantic relationship with this man when she slept with Jason is unknown.

Inspired by the homemade video, she and Jason proceed to have rough sadomasochistic sex with her hands bound whilst he verbally degrades her. Jason starts to strangle her, embracing this dark streak that he discovers in himself.

Later, Gran receives a phone call and learns that Maudette was found dead in her home. This revelation shocks Sookie while Jason feels uneasy.

While Jason is at work, he is met by Sheriff Bud Dearborne and deputy Andy Bellefleur. They inform him that Maudette has been murdered, and, while he initially denies having seen her the previous night, Jason admits to having slept with her. Bud and Andy take Jason into custody. ("Strange Love")

Jason is being interrogated by Bud and Andy, and they show him the sex tape that Maudette had made, unbeknownst to him. The video shows Jason choking Maudette until she is unresponsive, leading Jason to quickly leave her apartment. Moments later Maudette opens her eyes and calls Jason a moron. Jason is relieved to learn that he didn't kill her. Jason then says that a vampire may have killed her, and describes the bald vampire he saw in Maudette's other sex tape. They tell him that Jason's sex tape was the only one they found in Maudette's apartment. Bud ultimately decides to release Jason as they don't have enough evidence to hold him there any longer. ("The First Taste")

After Amy Burley is murdered, and Jason is once again the prime suspect, and is arrested again. Jason confesses to the murders of Maudette and Dawn Green, saying that, despite not remembering doing it, he must be guilty since all of these women keep dying around him. ("To Love Is to Bury")

It is ultimately revealed that Rene Lenier was the one responsible for the murders of Maudette and the rest of the victims in Bon Temps. ("You'll Be the Death of Me")