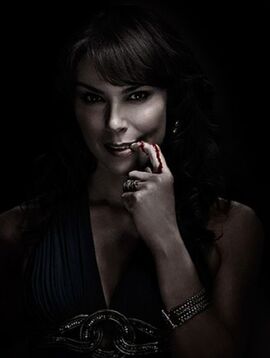 "All that fake civilization bullshit just fell away so they could dissolve into the infinite, so they could lose themselves and unite with their God."
―Maryann Forrester[src]

Maryann is found to be very sadistic when it comes to the people around her. She showed this many times whenever she committed a heinous murder by cutting out a victim's heart. The creature showed us this once more when she discarded the present Tara's mother sent for her.

At first she is very warm and kind to Tara after she is abandoned by her mother in jail. She invites Tara to her temporary home where she dances continuously and throws frequent parties and smokes what seems to be an unlimited amount of weed which numbs Tara to her true darkness.

As the only maenad seen thus far in the series, the true scope of Maryann's power was not revealed, though it is suggested that she possessed numerous unique and rare supernatural abilities. Daphne Landry implied that Maryann could do different things to different supernatural creatures; it was stated and shown that supernatural creatures can resist and/or be immune, to her hypnotic abilities.[1] Maryann also was shown to be unafraid of vampires and these creatures often stayed out of her way. Sophie-Anne Leclerq, the Vampire Queen of Louisiana, also stated that "fortunately" Maenads showed little interest in the vampire species and warned Eric Northman to not get involved with Maryann, further implying Maenads were powerful beings, even when compared to vampires.[2][3]

As a maenad, Maryann was effectively immortal. She did not physically age (retaining the appearance of woman eternally in her late thirties to early forties) and was immune to conventional injury (disease, poison, etc.). The only known way to kill a maenad is when she willingly lets down her supernatural defenses; the only known time a maenad does this is when they believe Dionysus has come to "ravish" and "quite literally devour" them.[3]

In addition to being immortal, Maryann was shown to be remarkably durable and resilient to conventional damage. This was shown in an instance where she effortlessly deflected a bullet fired at her with the palm of her hand. Also, when Bill and Cooter were met with Sookie's photokinetic powers later in Season 3, they were knocked several meters back through the air and experienced some degree of pain, whilst Maryann was only moved a step or two back, and she showed delight and had fun because of the experience. Ironically as long-lived as others claim Maryann to be, she didn't know what Sookie's power was exactly, but she did know that this power had something to do with the forces of nature. Regardless, it is unlikely that Sookie's latent fairy powers dealt any lasting damage, as Maryann was shown to enjoy it and even later requested that Sookie jolt her again. She was able to regenerate from damage sustained on her body and appears to be superior to even the likes of a vampire.

Maryann also possessed some degree of superhuman strength and speed, as shown when she lifted Sookie up with one hand a couple of feet of the ground, moving faster than Bill's eyes could follow. Due to being a Maenad, Maryann's most prominent feature is the ability to morph each of her hands into three razor-sharp talons that secrete a powerful toxin known to instantly paralyze humans, while the bacteria slowly poisons and kills the host. Unless the victim receives immediate and expert medical attention, even vampire blood is ineffective in healing those exposed to this toxin.

Maryann also proved to be impossible for vampires to drain, as her blood was made up of a black, corrosive and/or poisonous substance. When Bill bit her he was subsequently poisoned by her blood, which caused him to vomit and gag with pain. This left him in a noticeably weakened state, though he was able to fully recover by simply feeding on Sookie.

As a maenad, Maryann possessed the distinct ability to channel and manipulate human energy within an undefined radius of herself. When manipulating such energy, her body was shown to slightly unhinge physically and vibrate. When in this state of vibration, she usually stayed in one fixed location with her eyes closed. This suggested that this was something of a meditative process for her. Regardless, any human caught within her range of influence as she vibrated often engaged in hedonistic or primitive behavior. When her influence takes over a human completely, their pupils dilate to the point of blackening their eyes out totally, meaning the ego and super ego of their psyche is completely suppressed, leaving the I.D. (or inner desire) to run wild. Those taken over completely are naturally subservient to Maryann's will. Additionally those she takes over are resistant, but not immune, to the effects of glamouring and telepathy. Also, while it was difficult, her influence could be broken; this was demonstrated when Sookie and Bill combined their abilities to break Maryann's hold over Tara. It was then shown that while Tara was now resistant to Maryann's influence herself, Maryann was able to regain her hold on Tara by literally knocking sense into her. Lastly, Maryann demonstrated that she could inflict some kind of psychic pain onto those under her thrall. Her thralls were shown to mentally hear a high-pitched noise that caused them great psychic strain. It was heavily implied that Maryann could use this psychic pain-infliction to kill her thralls.

While supernatural beings were mostly immune to the aforementioned effect of energy channeling skills, it was stated that they are still affected by it, albeit in unique and different ways. Shifters were shown to change shape unwillingly when they were exposed to Maryann's energy manipulating abilities. In Charlaine Harris' books, maenads also have limited control over vampires, bestowing in them the madness infection, whereby they would go into a bestial mindset and become insane. This was widely known to be incurable and the only option would be to stake the vampire afflicted.

Maryann has also demonstrated limited aerokinetic abilities, being able to produce brief gusts of wind while using her powers of persuasion to induce chaotic behavior in others. Maenads are somewhat sensitive to powerful energy sources, as Maryann claims that the ritual energy from Miss Jeanette's spell is what ultimately summoned her to Bon Temps in the first place. It is unknown whether Maryann was in fact present in the ritual or it was just her energy that made Tara see herself as a child. And that child facade shows a possibility that Maryann knew about Tara's abusive life from the start.

Perhaps she also possessed some form of psychic intuition, as she commonly seemed to be aware of or know things that she had no possible way of knowing. She was able to identify Jason Stackhouse's relationship to Sookie, though never having met him beforehand. She also knew Andy Bellefleur by name, despite never having met him, and even knew Tara's birthday. She also was able to tell almost immediately that Sookie was not completely human upon meeting her, and, though unable to determine Sookie was of fairy origin, she did seem to know that someone or something was watching over her, which would later turn out to be Claudine and the other fae. She also foreshadowed Bill's imminent kidnapping at the hands of Russell Edgington. This was further alluded to as she seemed to possess some means of tracking her prey, as she was able to locate and attack Sookie whilst the latter was 20 miles outside of Bon Temps and in the middle of nowhere.

Maryann herself stated that she lived off human energy, though she was shown capable of eating as a human would, albeit in unfathomable proportions. In fact, even if it offered her no personal sustenance, she seemed to have a real passion for eating food and ordered plate after plate while she was dining at Merlotte's, filling up the entire table with entrees just for herself. Her love of food was also evident in her home life, as her kitchen was always decorated elegantly with exotic fruits.