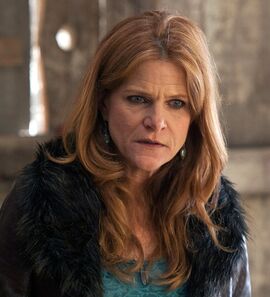 "Werewolves are pack people, and when our packmaster dies there's certain things we have to do to honor him."
―Martha Bozeman, to Sam Merlotte[src]

Martha Bozeman is a werewolf on the HBO original series True Blood. Played by American special guest starring actress Dale Dickey, Martha makes her debut on the episode "Turn! Turn! Turn!", at the beginning of the series' fifth season. The mother of Marcus Bozeman, packmaster of the pack of werewolves from Shreveport, Louisiana, Martha was powerful and respected within the pack due to her late son's position, and that of her late husband. She was in a relationship with fellow Shreveport werewolf JD Carson, but their relationship soured over JD's poor choice of allies. The grandmother to Emma Garza, Marcus Bozeman and Luna Garza's daughter, Martha plays a recurring role through the series' fifth and sixth seasons, and was last seen in the Season 6 episode "Don't You Feel Me""​.

As the wife and mother of the last two pack masters, Martha stands in high regard in the Shreveport pack. She has a lot of experience in pack life and often shares this with the younger wolves. The well being of her pack is of great concern to her. She disapproves of anything that could bring her pack in danger and makes this clear to the ones around her.

Martha believes in the sanctity of family and holds her blood-kin in high regard, regardless of the opinions of others. As her grandmother, Martha is very fond of Emma Garza. When her mother and father die, Martha opts to take her in. She feels Emma will grow up to be a werewolf and thinks it is best for her to be around her own kind.

Martha walks into a barn where Marcus' pack is torturing Sam, believing him to have been the one to kill Marcus. Martha asked Sam to show her where he buried the body saying she wishes to perform a particular ritual in honor of the packmaster. Sam assumes that once he tells her about where the body is she'll promise to let him go. But instead she tells him no, but she will promise that Emma and Luna won't be harmed, being that is what Marcus would've wanted. So Sam then agrees to show her where Marcus' body was buried. When Sam reaches the site where he and Alcide buried Marcus two werewolves begin to dig up his body. Eventually Marcus' body is dug up and Alcide and Luna arrive to tell the pack Sam didn't kill Marcus, Alcide did. An older werewolf goes up to Alcide and bows to him addressing him as pack master but Martha instantly tells him not to and says Alcide shouldn't be pack master. Alcide tells them Marcus deserved it and also says he doesn't wish to be pack master anyway. Martha then begins to mourn her son's death then shifts and begins eating Marcus' corpse. The older male werewolf, J.D., shifts as well. ("Turn! Turn! Turn!")

The wolfpack wants Alcide to eat Marcus and now become the packmaster. Alcide doesn't want any part of it however. J.D. and Alcide have more words, before Alcide leaves. Martha says it is his obligation to eat, however he has no interest. He states he doesn't care about the laws and to find someone else.

Luna takes Sam home and cleans up his injuries. While Luna goes to check on Emma Martha arrives at her home. Sam tells her that Luna doesn't want to see her. Luna arrives back into the room and sees her, telling her to leave. Martha asks what will happen when Emma "turns". Martha states that she "feels" Emma is a werewolf, not a shifter. Luna refuses to allow Martha to see Emma and sends her away. ("Authority Always Wins")

Luna Garza and Sam Merlotte are shot by a gang of masked gunmen. They are wheeled into the hospital - both alive. Emma runs to Martha’s house in wolf pup form and yelps at the door. Martha opens it and takes her in.

Sam visits Luna's bedside, just as Martha brings Emma to the hospital. Martha tells Luna that she doesn't want to compete with her or take Emma away, but just wants to be in her granddaughter's life. Luna tells Martha that someone is hunting shifters, and asks if she'll keep Emma safe. Martha agrees. ("Hopeless")

When Alcide decides to face J.D. for to take the leadershhip of the pack of Shreveport, he suspects this last one of setting of V to increase his strength, Martha walks in and tells Alcide that JD denied taking V. She tells Alcide that it is "JD's turn" to be alpha for J.D had enough respect to allow Marcus to be alpha after Marcus' father died. However her trust in J.D. is shaken when she finds this last one proposing V of to her granddaughter. She says "I don't know you anymore" and takes Emma out of there. ("In the Beginning")

Martha realizes that J.D. has become corrupt when he kidnaps a young man with the aim of chasing him as a game, with the pack. Alcide intervenes to save the human being and fights against J.D. J.D. and Alcide fight, and J.D., under the influence of vampire blood, is able to overtake Alcide. J.D. stands over Alcide with a rock, ready to kill him, when Martha ends the fight, by assuring J.D. that he has the leadership. ("Somebody That I Used to Know")

When Russell Edgington and Steve Newlin congratulate J.D. for his becoming packmaster, Russell bites his own wrist and the wolves flock to him to drink his blood. Martha refuses to go and drink his blood, staying back behind the others. He notes Martha, who is holding her granddaughter. When Martha says she' ll never drink from Russell, he grabs Emma and gives her to Steve to have as his first pet. Martha is horrified and panicked. ("Everybody Wants to Rule the World")

Martha tries to help Rikki after she is forced to drink an overdose of V by JD. She takes her to Alcide and his father, Jackson, in Mississippi. Jackson gives her a colloidal silver remedy to force the blood out. Alcide wants to fight JD again to oust him as pack master. His father suggests that they even the playing field by drinking his stash of high quality V.

The Shreveport werewolf pack torture a captured vampire and drain his blood. Alcide, Jackson and Martha confront them. JD tells Alcide that he is abjured but Alcide attacks and beats him to death while the pack looks on. With JD dead, Alcide pronounces himself pack master and lays down the law to his pack. ("Save Yourself")

Alcide takes over his pack as they eat the latest packmaster, J.D. One of the wolves brings an arm over to Alcide so he can inherit the flesh and truly become the new packmaster. He takes a bite out of the arm and is now the new pack master. Danielle, a young woman from the pack, shifts from wolf to human and tells Alcide that she is more than willing to serve him in any way he needs. While this is happening, Martha tells Rikki that Alcide is still on the blood, while watching Danielle and Alcide. Rikki doesn't look too happy about it, but Alcide enjoys the attention because of the vampire blood in his system. ("Who Are You, Really?")

When Luna dies, the wolves take Emma as she is a werewolf and belongs with them. When Nicole and her friends arrive and attempt to expose the wolves, Sam takes advantage and takes Emma back, causing outrage amongst the pack. ("You're No Good")

Alcide, Jackson, Rikki, Martha and Danielle go in seach of Emma until Alcide orders the others to return to Shreveport and, although Rikki objects, he intimidates her until she complies. ("At Last")

Sam later calls Martha and tells her she can have Emma as long as she promises not to return to the pack and Martha agrees. Emma says a tearful goodbye to Sam and Nicole. Martha thanks Sam from the bottom of her heart before she departs with Emma in her car. ("Don't You Feel Me")

Retrieved from "https://trueblood.fandom.com/wiki/Martha_Bozeman?oldid=145093"
Community content is available under CC-BY-SA unless otherwise noted.