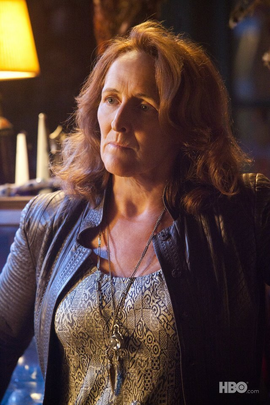 "It’s marvelous. They’ll do anything I want. They’ll slaughter their friends, kill each other, eat chocolate, go to the beach…"
―Marnie Stonebrook, delighting in her control over vampires[src]

Marnie Stonebrook was a powerful medium on the HBO original series True Blood. Played by Irish starring actress Fiona Shaw, Marnie makes her debut on the episode "She's Not There", at the beginning of the series' fourth season. Serving as the leader of a Wiccan coven at the Moon Goddess Emporium, Marnie becomes possessed by the spirit of the ancient witch Antonia Gavilán de Logroño, who uses the Wiccans to go after all vampires. However, it is soon revealed that Marnie herself is the one in control of these actions, making her a formidable opponent that Sookie Stackhouse and the others must face. The main antagonist of the series' fourth season, Marnie plays a recurring role through the same season. Meeting an untimely demise in the Season 4 episode "Soul of Fire", Marnie was seen one more time on the subsequent episode, "And When I Die", at the end of the same season.

Marnie appears to be good-natured, if not a bit odd, at first. However, after getting more involved in necromancy and serving as a vessel for Antonia, Marnie becomes vicious and malevolent.

Marnie Stonebrook was born in Savannah, GA, on June 21, 1960, the day of the summer solstice. Her mother, Agnes, was a schoolteacher and her father Cameron, was a military man. Her mother always a free spirit, got swept up in the counterculture revolution of the 1960s and took Marnie away from her father. They settled in a suburb of New Orleans, where Marnie got her first exposure to Wicca. Marnie's mother remarried a college professor who intensely disliked the south. He and Agnes moved to Olympia, Washington leaving a twenty-year-old Marnie in Louisiana. She dropped out of community college and immersed herself in the study of Wiccan magic. Marnie's paternal grandparents both had some kind of magic potential both being mediums and witches. After years of solitary study, she found a mentor in Alma Olivetti, an experienced older witch. Alma convinced Marnie to move to Shreveport in 1995 where the two friends opened the Moon Goddess Emporium.

Jesus Velasquez brings his boyfriend Lafayette Reynolds to Marnie's palm reading shop, the Moon Goddess Emporium for a wicca support group. She is able to channel the spirit of Eddie Fournier, which freaks Lafayette out. Later the coven successfully perform a ritual to resurrect Marnie's bird familiar. ("She's Not There")

The following night, Marnie wishes to resurrect a human body, much to her surprise, Eric Northman appears and delivers a threat to the coven: If her coven should ever meet again, he would kill them.

Marnie refuses and Eric nearly kills her. Then, Holly makes the whole coven join hands and chant an incantation. Inches between life and death, Eric frees Marnie after Tara tries to kill him with a wooden stake. Eric prepares to attack Tara, until the spirit of Antonia (as a result of the chanting) takes over Marnie's body and erases Eric's memory. ("You Smell Like Dinner")

The next day, Marnie tries to contact the spirit that possessed her once before, offering herself as a willing servant. Later that night, Marnie has a nightmare about a witch being persecuted, and attempts to save her. ("If You Love Me, Why Am I Dyin'?")

The following day, Jesus, Lafayette and Tara convince Marnie to reverse the spell she hexed Eric with. As Marnie creates a magic circle and tries to break Eric's curse, Pam grows impatient, and attempts to attack Marnie. However, Marnie is possessed once again by the spirit of Antonia Gavilán de Logroño and surrenders Pam under a curse. ("I'm Alive and on Fire")

After the process of cursing Pam she is left alone in the woods from Lafayette, Tara and Jesus and returns to the Moon Goddess Emporium. The next day she meets Sookie who came there for a reading. Marnie manages to call her gran through Sookie's necklace. Gran tells Sookie to leave immediately because Marnie is dangerous, leaving Marnie surprised. Shortly thereafter she is arrested by Katerina Pellham by Bill's orders. She is held captive in Bill's headquarters, where she has another vision of Antonia's past. There, Bill comes to glamour her to extract info about the reverse of the spell she cast on Eric and Pam as well. To Pam's disappointment Marnie knows nothing about the spells. ("Me and the Devil")

The following night, Marnie remains captive in her cell, until she desperately summons Antonia’s spirit for help. After Marnie falls under yet another vision quest of Antonia’s past, Marnie is able to fully and successfully invoke her spirit.

Alone and afraid in her cell, Marnie desperately summons Antonia’s spirit and begs her for protection. After revealing yet another vision of her previous life, Antonia is able to fully and successfully take Marnie as her human vessel. ("I Wish I Was the Moon")

After gaining full control over Marnie's body, Antonia makes an escape as Katerina Pellham and Luis Patiño die in the process. She later comes across a saddened Tara Thornton, whom she convinces to join her coven. After Tara recruits the local witches to join Antonia's cult, she sets forth with casting the same spell she hexed 400 years ago, to call all vampires into the sun. ("Cold Grey Light of Dawn")

After the discovery of her insufficient ritual, Antonia becomes furious, and begins to plan yet another attack on the vampires. However, her motivations are soon interrupted by Bill Compton, who apologizes for her unjustly death, and asks to make peace. After Marnie agrees to meet the king, they later come face-to-face at the Bon Temps Cemetery. As neither the vampires nor the witches trust the other, they are each supported by their own reinforcements. As Bill attempts to make an agreement between the two, all seems well until Sookie reads Martonia's thoughts and finds she is casting a spell during the scuffle Eric Northman impulsively kills Beverleen. As the battle between the two species begins, Marnie bewitches Eric with a spell to captivate him as her bound slave. ("Spellbound")

Later that night, as the coven begins to question their faith in Marnie, she and Roy plan yet another attack against the vampires. However, Marnie is later visited by the werewolf Debbie Pelt, who distracts Marnie by suggesting an alliance while Sookie Stackhouse attempts to free Eric. Before her escape, Sookie listens in on Tara‘s thoughts. Tara warns her about Marnie's plan to kill Bill during the "Festival of Tolerance". As Marnie and Roy prepare for battle, she casts a spell to seal the other witches inside and prevent them from leaving. After using Eric to lure Blackburn, Duprez and Kirsch away from their stations, Marnie enslaves them as well and uses them to aid Eric in his attempt to kill the Vampire King of Louisiana. Sookie arrives to warn Bill just in time, but is unable to stop the havoc at the festival. ("Let's Get Out of Here")

"Burning Down the House"[]

Fueled with anger and desperation, Sookie manages to break Marnie’s spell upon Eric by blasting a ray of light from her hands. After realizing the damage and destruction caused by her magic, Antonia attempts to abandon Marnie and her diabolical goals. As it turns out, throughout the entire process since Antonia’s arrival, Marnie has always been in control over her own actions. Later that afternoon, Jesus infiltrates the Moon Goddess Emporium, hoping to save Marnie. However, he soon discovers that Antonia is the victim, and Marnie is responsible for the recent attacks. ("Burning Down the House")

At the Moon Goddess Emporium the frightened coven beg Marnie to let them go. She tells them that they are free to leave at anytime, but informs them that there are vampires outside that will kill them should they attempt to leave. Casey becomes enraged and charges at Marnie who uses her telekinetic powers to impale the helpless girl with a ceremonial dagger. Having witnessed Marnie murder a member of her own coven, Antonia attempts to leave for good. Marnie, however, clings on ever tighter to the spirit, and performs a binding spell, sealing Antonia inside her body, and preventing her from leaving. With Antonia's powers, Marnie can use Casey's blood as a mirror showing the present and the future, where she sees herself shot in the head.

Jesus convinces Marnie that Casey is still alive, and can be saved with his help, to which she agrees, inviting him to use whatever he needs from her store. In reality, he plans to perform a ritual intended to free Antonia from Marnie's control. While he gathers the items he needs Holly and Sookie attempt to reach out to Marnie and persuade her to attempt a truce with the vampires. Outside Marnie is met by Eric, Bill and Pam, who request Sookie's freedom. Marnie agrees upon the condition that both Eric and Bill commit suicide. While they initially agree, Pam has other plans, and fires a rocket launcher at the Emporium, which explodes upon meeting the enchanted barrier surrounding the building. Convinced that the vampires cannot be negotiated with, Marnie returns inside with Sookie still in tow. Marnie instructs the coven to form a circle and begins casting a spell designed to enchant the vampires into walking into the protective barrier, thus incinerating themselves, but is foiled by Sookie who uses her photokinesis to break the circle. Enraged at Sookie's interference, Marnie conjures a ring of fire intending to burn Sookie to death. Just in time, Jesus completes his ritual freeing Antonia from Marnie's body. Antonia departs, finally at peace, leaving Marnie powerless and distraught.

Without the aid of Antonia's magic, the enchanted barrier around Moon Goddess is disabled, allowing Eric and Bill to enter the premises. Roy attempts to defend Marnie, but is swiftly killed by Eric. Alone, powerless and facing certain death, Marnie assures Bill that no one, including vampires, lives forever, before being gunned down.

After her death, Marnie's spirit travels to Bon Temps and takes possession of Lafayette's body. ("Soul of Fire")

Marnie forces Jesus to give her his magic in exchange for sparing Lafayette's life, stabbing Jesus to death with a dagger. Using her new power in a last-ditch effort to take revenge on the vampires, she binds Bill and Eric to a stake with chains of silver and tries to burn them alive. Holly summons the spirits of the dead, including Antonia and Adele, who convince Marnie to abandon her quest for revenge. Marnie is last seen peacefully passing on into the afterlife, finally having friends with whom she can connect. ("And When I Die")

Marnie was an average witch with a vast knowledge of the supernatural; who was possessed by Antonia Gavilan's spirit. As a result Marnie acquired great power by accessing Antonia's abilities. Marnie could hear the dead and contact them, an ability that resulted in her being ostracized. Marnie had a vast knowledge of the magical arts, occultism, astrology and ceremonial magic, due to years of study and reading. By summoning divine intervention and the hidden powers of nature, Marnie had the potential ability of altering reality at will. When Marnie was united with Antonia's spirit, she developed some degree of precognition (Foreseeing her own death in Casey's blood). She was able to bring her beloved bird back to life and also control vampires. As a medium Marnie was able to control spirits and bind them to her, acquiring the magical or mystical skills of the spirit. When Marnie was controlling Antonia she had access to Antonia's magical abilities such as teleportation, energy projection, elemental control (mist, fire, wind etc.), necromancy, healing powers, illusion-casting, mind control (over vampires) and the creation of energy fields.