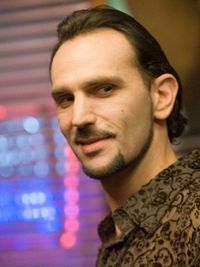 "Discrimination against vampires is punishable by law in the great state of Louisiana. Personally, I don't give a fuck. But I AM THIRSTY."
―Malcolm Beaumarchais, to Sam Merlotte [src]

Malcolm Beaumarchais, born in 1760 and made vampire in 1793, was a vampire on the HBO original series True Blood. Played by American guest starring actor Andrew Rothenberg, Malcolm makes his debut on the episode "The First Taste" in the series' first season. An acquaintance of the vampire Bill Compton, Malcolm serves as a minor antagonist through the series' first season, plays a recurring role through the same season, and meets and untimely demise in the Season 1 episode "Burning House of Love".

He was the illegitimate child of a Parisian prostitute who left him in a gutter shortly after birth. He was taken in and brought up by a band of traveling beggars and thieves, who sold him to the Marquis de Sade at 15 for whom he served as a valet until he escaped two years later to join a Dutch circus. He was turned during the Reign of Terror by a former aristocrat, who remembered him from an orgy in 1776 at De Sade's castle at Lacoste. De Sade’s pet name for Malcolm was “le garcon de l'eau” which, when translated from French to English, means "the water boy."

Jerry was staying with Malcolm to infect him with Hep D so that he could weaken and then kill him. Malcolm found out about this after Sookie Stackhouse warned Bill Compton not to drink from Jerry. Malcolm, Liam and Diane then took Jerry away and killed him. They also killed Liam's fangbanger, a woman named Janella. ("The First Taste")

The trio then bought a house in Bon Temps, Louisiana, as they liked the town and the low vampire population. While at Merlotte's Bar and Grill they scared the locals by threatening them, even trying to kill some. They were stopped, however, by Bill when he agreed to leave with the three vampires and go back to their nest. Royce Williams decided to get revenge on the vampires. ("Mine")

He waited until morning when the vampires were asleep and threw Molotov cocktails through the windows of their house, burning it down. The fire killed Liam, Malcolm, Diane and a fangbanger named Neil Jones. ("Burning House of Love")

Malcolm possessed the common powers of a vampire: Superhuman strength, speed and healing. Because of his age, he was stronger and faster than younger vampires such as Bill, Diane and Liam, though he was far weaker than older vampires such as Godric and Eric. His weaknesses included a stake to the heart, silver and fire (though sunlight would slowly kill a vampire of his age).

Retrieved from "https://trueblood.fandom.com/wiki/Malcolm_Beaumarchais?oldid=134781"
Community content is available under CC-BY-SA unless otherwise noted.