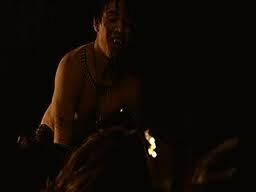 A vampire who creates

"Becoming a maker is an eternal commitment, greater than any marriage, deeper than any human bond."
―Eric Northman, to Pamela Swynford de Beaufort[src]

Maker is a vampire who has turned a human into a vampire. On the HBO original series True Blood, the vampire offspring, or progeny, is bound to his or her maker until he or she is formally released. The process of becoming a maker is called "making" or "turning."

"I renounce the ties of our blood, and my dominion over you as my progeny. As your maker, I release you."
―Eric Northman, to Pamela Swynford de Beaufort[src]

A vampire inherits part of his or her essence from his or her maker; therefore, the maker/progeny bond is strong and manifests both physically and emotionally.

Most vampires do not take becoming a maker lightly; for example, Eric Northman produced only two progeny in a millennium. Nan Flanagan never reproduced, as she was far too ambitious with her career, and was not willing to take on the responsibility of being a maker. ("Let's Get Out of Here") Bill Compton also had no plans to become a maker, but when forced to do so, produced only Jessica Hamby and became a committed father figure. Pamela Swynford de Beaufort is a notable exception; she created two progenies -- both of whom she had no feelings for at the time -- for rather shallow reasons. Her first stint as a maker was entirely out of curiosity; she abandoned her progeny within months. ("Pam and her progeny Colin") Her second progeny was created in exchange for the chance to reconcile with her own maker. ("Turn! Turn! Turn!") Rosalyn Harris created 204 progeny in 211 years; it is all but impossible for her to have had deep, personal relationships with all or even most of them.

A progeny may turn a vampire and become a maker him or herself while still bound to his/her maker. The grandparent/grand-maker has no mystical bond with the grandchild/grand-progeny.

A maker has a certain amount of control over their progeny due to the maker-progeny bond.

Retrieved from "https://trueblood.fandom.com/wiki/Maker?oldid=142424"
Community content is available under CC-BY-SA unless otherwise noted.