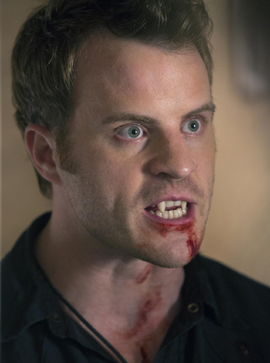 "The darkness in me; it battles with the light every second of my being. But even in the darkest hour, as I stood over the dust of my own mother and father, I couldn't bear to kill a child."
―Macklyn Warlow, on the dual sides of his psyche[src]

Macklyn Warlow, also known as Ben Flynn or simply Warlow, was a Faerie-vampire hybrid on the HBO original series True Blood. First played by an unknown extra, Warlow makes his debut in a flashback, on the episode "Hopeless" in the series' fifth season. Replaced by British starring actor Rob Kazinsky, starting with the episode "The Sun", in the series' sixth season, Warlow was the second oldest vampire, and third oldest supernatural being in the series, next to Lilith and Maryann Forrester. A powerful hybrid, possessing both faerie and vampire abilities, Warlow plays a recurring role through the series' fifth and sixth seasons. Seeking to take possession of Sookie Stackhouse to turn and marry her, Warlow, along with Sarah Newlin, was the main antagonist of the series' sixth season. Warlow meets an untimely demise in the Season 6 episode "Radioactive".

Warlow claims to be a decent person at heart, which can be seen in his act of saving Jason Stackhouse's life. As Warlow was born faerie, he was born with their sense of honor and kindness. His kindness and desire to help others lead him to perform acts that could risk revealing his true identity. According to the Book of the Vampyr, Warlow will be the savior of the entire vampire species, perhaps because his blood allows vampires to walk in the sun. The book claims that Warlow will lead Lilith to the sun, thus destroying her and saving the vampires from extermination.

Despite the strength of Warlow's faerie side, he also has a dark side. He attacks and kills an entire clan of faeries including the family of Niall Brigant. When confronted with the possibility of being attacked by Niall in retaliation for his parents' murders, Warlow incapacitates Niall and throws him into a portal to exile, rather than killing him.

In his quest to gain possession of Sookie, Warlow kills both of her parents, draining their blood. It was later discovered that Warlow saved Sookie from being killed by her father. Warlow deeply loves Sookie and mentioned that whenever he sleeps, he'd dream of Sookie and spending the rest of his life with her.

Another side of Warlow was revealed when Sookie hesitated to be turned into a vampire. Warlow lost all patience and began to forcefully turn her. He tried to give this violent act some credibility by performing it in some Fairy marriage ritual fashion. While he acted he told Sookie how much disregard he had for her "low-born" friends, thus showing he harbored deep supremacy feelings towards ordinary humans and possibly other less powerful supernaturals. His arrogance was ultimately a major reason for his demise similar to Russell.

It is unknown why Warlow's personality took such a dark turn prior to his true death but Warlow mentioned having to constantly fight off his dark-side which he is apparently unable to do when night falls unless he has already fed, Also Eric Northman had drained Warlow of nearly all his blood and thus his "light", possibly allowing his darker, vampiric side to dominate his psyche though even after this, he managed to retain a merciful side as rather than kill all those that stood in his way such as Bill, Violet, Jason and Andy, he merely subdued them.

Warlow, as stated in the Book of the Vampyr, is one of the progenies of Lilith herself. He outlived his maker by over 5,000 years, and was active in some form well into the Common Era. His name is known to those who have studied the Book of Lilith, but he remains a somewhat mysterious figure even to Lilith's most ardent followers.

Thousands of years ago, when the fae still lived openly on Earth and the human and vampire races were young, Warlow was a faerie prince living in the same village as Niall Brigant. One evening, Warlow left the village to collect water from a nearby stream, where he encountered a beautiful naked woman, dark as the night, who could move at astonishing speed. Astonished by the smell of his blood, Lilith raped and then turned him, saying that God had sent him to her for a higher purpose: to save all vampire-kind. ("F**k the Pain Away")

Four years later, a homesick Warlow returned to the village (against her advice), where he slaughtered the entire village after losing control of his vampire side. He managed to spare Niall; although he had only been recently turned and reduced his own parents to dust, Warlow "couldn't bear to kill a child." ("At Last") A distraught Warlow returned to Lilith and destroyed her cave with photokinesis, forcing her to meet the sun. He then turned his back on the vampire race. ("F**k the Pain Away")

Millennia later, Warlow located one of Niall's sons and got him to sign a contract promising the next fae-bearing female Stackhouse to him. Warlow lost the Stackhouses' trail for several centuries until the night he killed Sookie and Jason's parents, at which point Claudine was able to successfully banish him from this plane. However, the ritual that Sookie and Claude performed 20 years later gave Warlow a beacon to follow, and he was able to return.("The Sun")

"I am coming for you! You are mine!"
―Warlow to Sookie[src]

Warlow is first seen in a flashback when he sensed/smelled Sookie's bloody band-aid in the back seat of Corbett and Michelle's car. It was assumed they were killed in a flash flood on a bridge, however Sookie discovers a vampire was actually to blame. ("Hopeless")

Sookie uses Claude and other faeries to perform a ritual to try and discover who actually attacked and killed her parents. She discovered that Claudine had zapped the culprit. Sookie remembers that Claudine had called him "Warlow". He later reached out to Sookie through the ripples, and threatened that he was "coming for her". ("Somebody That I Used to Know")

After Jason finds an old manuscript under Adele Stackhouse's floor board, Sookie and Jason take it to an expert to have it identified. The expert declares it is not any language known to humans. The Stackhouses take it to the faeries to translate. According to Maurella, it is a vellum document signed in blood dated in 1702, a contract between John William Stackhouse and M. Warlow that promises the first fae-bearing female in the Stackhouse line to Warlow. According to Claude, that female happens to be Sookie. ("Gone, Gone, Gone")

Warlow was the first and only faerie-vampire hybrid in existence. Warlow possesses all the abilities of the fae, such as telepathy and photokinesis. Warlow is capable of sending others to other dimensions against their will, though his ability to manipulate the veil between worlds is less precise than that of traditional faeries, such as Niall or Claudine. Warlow's fae side seems to render him capable of consuming ordinary food and beverages (something vampires cannot do themselves) and may have also made him immune to silver. The full extent of his powers and weaknesses was never revealed. Warlow's blood seems to give vampires the ability to walk in the sun indefinitely, as Bill was able to walk in the sun for consecutive days. Warlow is also capable of entering the homes of human's at will.

It can be assumed that due to his age being greater than Niall, and that a Faerie's powers become stronger with age, that Warlow's fae abilities are stronger than Niall and any other Faerie in the history of Faes. This is demonstrated by the fact that Warlow rendered both Bill and Violet unconscious with a single zap of his faerie light, while Niall only managed to momentarily stun Nora despite striking her multiple times with more pronounced blasts.

In addition to his faerie powers, he has the common powers of a vampire, such as superhuman strength, speed, healing and a natural affinity for glamouring along with the rarer ability of flight, and his blood possesses all the qualities that could be expected from high-grade V. Due to him being over 5,500 years of age, Warlow's powers are extremely advanced - he is in all likelihood far stronger than other millennia old vampires that have featured on the show like Russell Edgington, Godric and Salome Agrippa. The only people capable of taking him on would be Lilith, the sirens, and the Lilith-augmented Bill Compton. Warlow demonstrated his superior vampire strength by easily overpowering Bill after the latter lost his Lilith-granted special powers.

Under normal circumstances, a vampire of his age would be killed by sunlight almost instantly, but as a faerie, he can walk in the sun with no ill effects whatsoever.

Despite his immense age and implied strength, Warlow has been shown to be rendered almost completely defenseless when restrained by bonds that were enchanted by faerie light. In this state, Eric Northman (a vampire much younger and weaker than Warlow) was able to attack and drain Warlow almost to the point of the true death.

Like ordinary vampires, Warlow can be killed by staking, and that is how he met his true death. ("Radioactive") However, like the Faerie-enhanced Russell Edgington, it took considerable time to take effect. Like ordinary faeries, his true form was revealed in death as a pointy-eared goblin-like creature.

In addition to this, the power of daywalking died with Warlow, as all the vampires that fed on his blood lost this ability after he met the true death. Eric Northman was even shown burning in the sun immediately after Warlow perished. Being not only a faerie-vampire hybrid but also the oldest vampire in the series (with the exception of Lilith) he is most likely the most powerful vampire in existence after Lilith's death.

He is capable of traversing dimensions himself and is definitely immune to silver as he consumed it with no effect.  He could also enter homes without an invitation.  His only weakness was staking. After the death of Billith, Warlow was likely the most powerful being in existence.