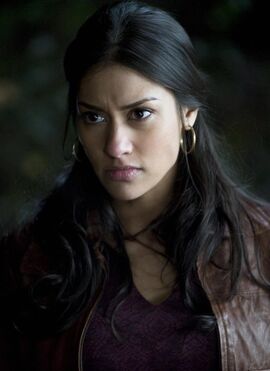 "Just get the fuck out!"
―Luna Garza, to Sam Merlotte

Luna Garza was a shapeshifter on the HBO original series True Blood. Played by American starring actress Janina Gavankar, Luna makes her debut on the episode "She's Not There" in the series' fourth season. A skinwalker introduced as a new love interest for the already established Sam Merlotte, Luna plays a recurring role through the series' fourth, and fifth seasons, and meets an untimely demise on the episode "Who Are You, Really?" at the beginning of the series' sixth season.

Luna was a headstrong woman who wasn't afraid to speak her mind. She could often be cold or even rude to strangers and didn't like them butting into her business. When prompted, she often made rash decisions without properly thinking situations through. At those moments she would often ignore the advice of others or snap at them for not helping.

Despite all this, Luna possessed a caring and loving side. She proved she would do anything for her daughter Emma. When something or someone threatened her daughter, Luna would jump into action without hesitation.

She was even prepared to risk her own life while doing so. When Emma was taken to The Authority headquarters by Steve Newlin, Luna skinwalked as Steve to get her out, while knowing prolonged skinwalking could kill her.

Luna was able to shapeshift into any other animal at will although she is forced to change on a full moon.

Unlike most other Shapeshifters, Luna can transform herself into other people, making her a Skinwalker. She gained access to these powers when her mother died giving birth to her. Technically, a loop-hole to the rule because Luna had no means to kill her.

As a Shapeshifter, Luna is also slightly stronger than humans though she is no match for even newborn vampires. Luna has slightly superior speed while in human form. Her speed peaks while in the form of fast animals. Luna has greatly enhanced senses.

Luna's go to shift was that of a bat.

Luna and Sam having a conversation

Luna with Sam Merlotte, Emory Broome and Suzanne McKittrick shifting into horses.
Add a photo to this gallery

In the Books[edit | edit source]

Luna is introduced as a minor character in the second book, Living Dead in Dallas and the only major character she interacts with is Sookie. Luna is a Hispanic woman with dark hair and eyes and lives in Dallas. She's working undercover at the Fellowship of the Sun church in Dallas and helps Sookie escape from it when Steve Newlin imprisons her there. As Luna and Sookie take off, Luna explains more about the supernatural community to Sookie and introduces her to two werewolves. Luna is a shapeshifter and she calls herself werebat, the bat is the form most comfortable to her, as the collie is to Sam. Luna has not made any further appearances in the books, however, she did make an appearance in the novella "Small Town Wedding".

Retrieved from "https://trueblood.fandom.com/wiki/Luna_Garza?oldid=145053"
Community content is available under CC-BY-SA unless otherwise noted.