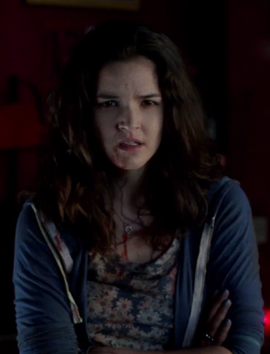 "We're all gonna die no matter what."
―Lucinda, about the inevitable fate of the Hep-V infected vampires.[src]

Lucinda was a Hepatitis V infected vampire on the HBO original series True Blood. Played by American guest starring actress Chelsea Ricketts, Lucinda made her debut in the episode "I Found You" in the series' seventh, and final, season and met an untimely demise in the episode "Death is Not the End" during the same season.

After Ronnie drains one of the Hep-V vamps' prisoner, cutting their rations by a fourth, Jerome states that they need to go out and hunt for more people again. Lucinda expresses concern over this, and it becomes clear that Lucinda is feeling very frightened and overwhelmed over their situation, stating that they will all die no matter what. ("I Found You")

With their rations running dangerously low, Jerome decides that the H-Vamps have no choice but to go back out and hunt again. Lucinda exclaims that she can't, as she does not have the energy. ("Fire in the Hole")

When Sookie and her group of friends and allies storm Fangtasia to rescue Arlene and the others, a massive battle erupts between vampires and humans alike. Lucinda is killed during the battle, along with the rest of the H-Vamps. ("Death is Not the End")