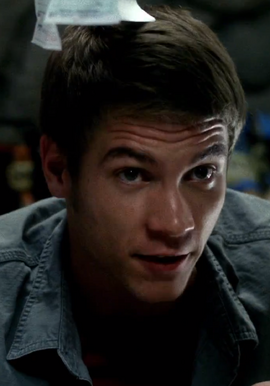 Lou was a human vigilante on the HBO original series True Blood. Played by American actor Lucas Adams, Lou makes his debut on the episode "Jesus Gonna Be Here", at the beginning of the series' seventh season. A blue collar male in his early 20s, Lou was a member of Vince Gibson's vigilante group, and goes on patrol with him and several others. Playing a recurring role through the same season, Lou met an untimely demise on the episode "Fire in the Hole", in the series' seventh, and final, season.

Lou shoots and kills Alcide Herveaux while the vigilante group is out patrolling. He is shot in the neck and killed in return fire. ("Fire in the Hole")

Retrieved from "https://trueblood.fandom.com/wiki/Lou?oldid=143051"
Community content is available under CC-BY-SA unless otherwise noted.