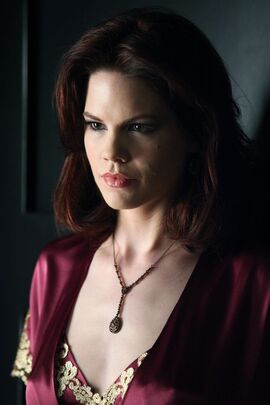 "It's true. You're in love with a human. That's so tragic, it's funny "
―Lorena to Bill Compton[src]

Lorena Krasiki was a vampire and the maker of Bill Compton on the HBO original series True Blood. Played by American guest starring actress Mariana Klaveno, Lorena makes her debut on the episode "Sparks Fly Out" in the series' first season. Playing a recurring antagonistic role through the series' second and third seasons, Lorena met an untimely demise at the hands of Sookie Stackhouse in the Season 3 episode "Hitting the Ground". She was seen once more, in a flashback on the episode "Whatever I Am, You Made Me", in the series' fifth season.

Before being turned, Lorena was a loving and tender-hearted young woman, but all that changed when she had the misfortune of meeting the vampire István. After a life of pain and abuse at the hands of her maker, Lorena had grown cold and bitter herself. When confronted with someone who expressed sincere love and/or humanity, she would be fascinated, as those feelings were distant for her.

As a vampire, Lorena was the epitome of vampiric evil and malice, and was considered savage even by vampire standards. Her sadism and cruelty were limitless and one of her few pleasures was tormenting others. During her time with Bill, the two engaged in unspeakable acts of torture and depravity against the humans they preyed upon.

Although she carried herself in a lady-like manner and put up a facade of gentility, her temper could be easily provoked, which would reveal her true nature. At such moments, she would snap at anyone who spoke against her and lash out violently against them.

When denied something she wanted, Lorena would try to take it by force, whether it be something trivial like a necklace, or another person. Her savagery and lack of restraint often led her into conflict with other vampires. This could lead to her being humbled when she crossed a more powerful vampire such as Eric Northman, or Godric, who then put her in her place.

There were those for whom she appeared to have genuine affection (like her progeny Bill Compton). However, due to her possessive nature and short temper, she would often drive them away and be left alone once more.

Lorena was born in 1759. She was the illegitimate child of an unmarried lady in waiting for the empress of Austria, who arranged for the bastard child to be raised by nuns in Vienna. She was a well behaved child, model student, and a lover of nature. She told the nuns that God was not just in the church, but in all of the world.

The evening before she was due to take her vows, she stayed out after dark and was turned by István, who used Lorena's beauty to lure willing men to his clutches, thereby raping and murdering countless men and mutilating their bodies. In forcing Lorena to watch every horrifying episode, he created the evil sadistic vampire we see today.

In 1865, Lorena was living in a cabin in the woods outside of Bon Temps. Bill Compton was returning from the Civil War but was exhausted. He was in need of both food and rest. Lorena offered him aid. When she came on to him, Bill refused her advances and told her he loved his wife. Lorena was impressed by his strong moral character and decided not to merely feed on him, but to make him a vampire. ("Sparks Fly Out")

In 1867 Lorena was with Istvan when he came in with a 12 year old girl named Mary Rieser, and forced Lorena to make her into a Vampire. In 1868, she released Mary.

After Bill goes to check on his family following a smallpox outbreak, Lorena arrives and glamours Bill's wife Caroline in order to calm her and make her forget seeing them. She's later present when Bill buries his son Thomas, who unfortunately succumbed to the disease right before their visit.

Lorena and Bill settled in San Francisco for a time, and frequently visited the Comstock Brothel run by Pamela Swynford De Beaufort. The pair delighted in torturing and slowly draining the prostitutes there. However, the much older and more powerful vampire Eric Northman interceded at the behest of Pam, easily subduing Lorena - with whom he was already acquainted - and repelling Bill when he attempted to protect her. Frightened of Northman, Lorena quickly left, after apologizing to Pam and agreeing to pay $500 for every prostitute they drained. ("Whatever I Am, You Made Me")

Lorena and Bill were lovers. Posing as French tourists in Chicago, they tricked and viciously fed on a well-off couple, the lady of which had a valuable necklace. Mid-feeding, Bill took the necklace and gave it to Lorena. ("Hard-Hearted Hannah")

Bill and Lorena lived in Los Angeles, California. Having grown tired of a murderous lifestyle, Bill begged Lorena to release him. He admitted to having never loved her, even retorting that she was always sad and alone. Lorena refused until Bill threatened to stake himself. In bloody tears, Lorena finally let him go. ("Release Me")

Lorena met with Eric Northman in the Hotel Carmilla lounge for a discussion about Bill Compton. Still sporting the necklace Bill gave her, Lorena prevented him from reaching Sookie when she was in trouble at the Fellowship of the Sun church. ("Hard-Hearted Hannah") Lorena exerted great effort to win Bill back from Sookie. Bill however escaped with the aid of the bellboy's distraction, bashing Lorena over the head with a 52" plasma television. Later, at Godric's home, she interrupted his gathering when she attempted to kill Sookie after the two had words, but Godric was fast enough to stop her. He commented on Lorena's age and berated her for being savage and not having grown in all her years. He ordered her out of his home and out of his area before sunrise.

She was then escorted out of Godric's home by Bill at the sheriff's request. Lorena admitted to still loving Bill and asked when they would see each other again. Bill declared they never would, whereupon she reminded him they were immortal and were bound to cross one anothers' paths again. ("Timebomb")

While Bill had dessert with the King of Mississippi, Lorena walked in wearing jockey apparel. Angered, Bill grabbed the fire lamp behind him and threw it at her, causing her to scream while she was engulfed in flames.("Beautifully Broken")

Later when Bill was alone in his room, Lorena walked in. Bill attacked her, admitting to how she succeeded in stealing his freedom and humanity. Lorena, still in love with Bill, kissed him. Bill immediately reacted by rough and unusual sex with his maker (Bill twists Lorena's head completely around during sex). Realizing what he had done, Bill let out an agonizing yell. ("It Hurts Me Too")

After Bill's attempt to kill Russell Edgington, Lorena was ordered by Russell to take Bill to the "slave quarters" and execute him. She proceeded to slowly torture him and even allowed Cooter and Debbie to drink his blood.("I Got a Right to Sing the Blues")

When Sookie came to rescue Bill during the day, Lorena overpowered and bites Sookie, noting how delicious her blood was. Bill took advantage of Lorena's awe and quickly pulled her away. Bill held Lorena down as she said "I love you" to him. Sookie staked Lorena, noting "you wouldn't know love if it kicked you in the fangs". Lorena exploded into a bloody mess. ("Hitting the Ground")
Pam dreams of her encounter with Eric, Lorena and a young Bill at her brothel just before she was turned in 1905. ("Whatever I Am, You Made Me")

Lorena had the common powers of a vampire: superhuman strength, speed, and healing. Because of her age, she was stronger and faster than younger vampires such as Bill and Jessica though she was weaker than older vampires such as Godric and Eric. Her weaknesses included a stake to the heart, silver, and fire. Sunlight would slowly kill a vampire of her age. She was 249 years old at the time of her death.