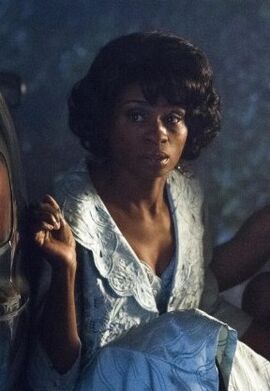 Lettie Mae is a very religious woman, believing anything in life has a purpose. She started out as rude, abusive and neglecting, which was displayed to her daughter in particular. Her behavior took a turn for the better when she sobered up from her alcohol abuse.

Like her sister and nephew, Lettie Mae seems to possess some characteristics of a medium, although not as pronounced as theirs. She is also highly susceptible for spiritual influences such as when she underwent an exorcism in an attempt to solve her drinking problem.

When her daughter Tara was turned into a vampire, she visited her one last time to bid her farewell. She stated that as a preacher's wife, she could not have a vampire for a daughter and that Tara was now dead to her. She later got back in touch, when her guilt of neglecting Tara during her childhood became too much.

Lettie Mae is a single mother to Tara Thornton. Tara's father's whereabouts are currently unknown. She has one sister, Ruby Jean Reynolds, who is currently in a clinic for her schizophrenia.

Lettie Mae was an alcoholic. While Tara was growing up, Lettie Mae would frequently steal money to buy alcohol and ignore her daughter. This caused Tara to spend a lot of time with Sookie Stackhouse, so much so that Sookie's grandmother, Adele Stackhouse, became a second mother to Tara. This caused animosity between Adele and Lettie Mae, and, at more than one point, Adele called social services on Lettie Mae, though she managed to keep custody of her child.

Although Lettie Mae has spent much of Tara's life drunk and being abusive, there is still a strong bond between them.

Lettie Mae is first shown drunk in her home, belligerent and angry with Tara. Lettie Mae throws a bottle at her, causing Tara to leave. ("The First Taste")

Lettie Mae attended Adele Stackhouse's funeral, slightly sober, to pay respect to Adele. It was at the funeral that she told Tara she needed money for an exorcism, as she believed there was a demon inside of her forcing her to do evil. Tara eventually agreed to pay for her mother's expensive exorcism. ("Cold Ground")

Later, mother and daughter journeyed into the woods outside Bon Temps to meet with a woman named Miss Jeanette who preformed Lettie Mae's exorcism, curing her alcoholism. The power of Lettie Mae's belief in her "exorcism" led her to recover from her addiction. Things started to look up for Tara and Lettie Mae's relationship.

Tara even found her mother making her Hoe Cakes one morning. ("Burning House of Love"), ("I Don't Wanna Know")

In the season finale after Tara is arrested for drunk driving, Lettie Mae arrived at the jail to tell Tara that she wasn't going to bail her out so as to save her soul from Tara. Tara angrily berates her mother for making her life terrible yet finally having the chance to help her and doing nothing. She accuses her mother of never loving her and tells her to get out of her sight. ("You'll Be the Death of Me")

Lettie Mae allows Lafayette to bring Tara to the house while she is under Maryann's influence. However, after Tara tells her mother that if she was a true mother that she would let her escape, Lettie Mae threatens Lafayette with a gun. Tara escapes and tries to save Eggs. Later on, Lettie Mae is seen when Sookie surprises her and knocks her out to save Lafayette.

She is seen apologizing to Lafayette who does not accept her apology.

Lettie Mae calls Reverend Daniels to help Tara through Eggs' death. Lettie Mae however, seems more occupied with him, than helping her own daughter. She fails to keep an eye on Tara, who locks herself in the bathroom and swallows a bottle of pills. Lafayette stops Tara and kicks Lettie Mae out. ("Bad Blood")

The next time Lettie Mae is seen is when Tara discovers her mother having an affair with Reverend Daniels. Tara runs out of the house and Lettie Mae explains that Reverend Daniels will divorce his current wife to marry Lettie Mae. Lettie mentions she is in love and requests Tara to be happy for her. Lettie expresses her desire to become a preacher's wife and Tara wishes her luck; hugging her before leaving. ("Evil is Going On")

Lettie Mae arrives at Terry and Arlene's with Reverend Daniels. They are now married. Lettie Mae appears to be more formal, polite, and proper. Lettie Mae is shown to be religious and spiritual when she yells "Praise Jesus!" Also when Arlene says you people, Lettie Mae questions her by what she means by that and Arlene responds religious people. Also Reverend Daniels begins to yell at a sign that says Baby Not Yours, presumably written by Mavis. It is hinted around that Lettie is currently working at the Bon Temps Church to help with blessings. They begin to sing and cleanse the house for any unwanted entities. When they enter the master bedroom Arlene states how the smoke smells like pot. Lettie Mae shakes smoke in a corner, which Reverend Daniels says "That's where the Devil hides." Lettie Mae mentions how she was possessed by a demon once but a slightly thrown Arlene states that all they have is a ghost. ("Me and the Devil")

Lettie Mae learned of her daughter's fate and visited Fangtasia. Upon seeing Tara being a vampire now she hurls accusation against her daughter that she cannot have a vampire daughter as a minister's wife. Tara taunts her that they will see each other again. ("In the Beginning")

When the arrangements are being made for Terry Bellefleur's funeral, Arlene tells Andy that she would like Reverend Daniels to perform the service as Terry liked him. The Reverend agrees and, when he arrives at Terry's funeral, Lettie Mae also attends. She encourages Big John to speak at the funeral. ("Life Matters")

At the vampire-human social thrown by Sam and Arlene at Bellefleur's Bar and Grill, Lettie Mae approaches Tara and asks to speak to her alone. She tells Tara she feels guilty for neglecting her in her childhood. She offers to feed her daughter her blood as a way to compensate for her past behavior. At first Tara seems hesitant and rejects the offer. She later gives in and feeds from her mother. ("Radioactive")