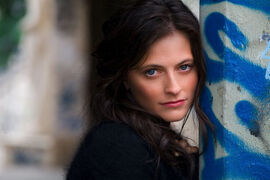 Lara Pulver, born September 1, 1981 in Kent, England, is a British actress who plays the role of Claudine Crane on the HBO original series True Blood. Making her debut on the episode "Hitting the Ground", in the series' third season, Lara plays the role of one of seventeen sisters of the Crane family, including Claudia, Claudija, Claudwina and Claudette. Following under the leadership of her telepathic Queen, the Queen of the Fairies, Queen Mab, Lara possesses only one brother, her fraternal twin, the telepathic fae Claude Crane. Playing a recurring role through the series' third, fourth, and fifth seasons, Lara states that she and others like her had protected and, on occasion, saved Sookie Stackhouse from danger. Lara met an untimely demise at the hands of Eric Northman in the Season 4 episode "If You Love Me, Why Am I Dyin'?", although she appears once more, in a flashback in the Season 5 episode "Somebody That I Used to Know".

Lara studied drama with the National Youth Music Theatre and went on to gain a BA Hons degree in Theatre. Lara's extensive theater career lead her to gain a Laurence Olivier Award nomination for her portrayal of Lucille Frank in Rob Ashford's production of Parade at The Donmar Warehouse. She was invited to re-create the role at the Mark Taper Forum in Los Angeles opposite T.R, Knight, winning much critical praise.

Lara made her screen debut in 2008, in the BBC prime time show Robin Hood, playing Isabella of Gisbourne. The show has been a huge international success and currently airs on BBC America. In 2010, Lara appeared in The Special Relationship, a British/American political film starring Michael Sheen and Dennis Quaid. Most recently, she made appearances in the popular television shows Skins and [[Wikipedia:Sherlock (TV series)|Sherlock]].