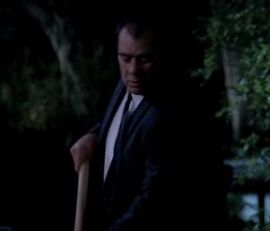 Lambert is a minor character in the fifth season episode "Sunset". He is played by an uncredited actor. He is a guard for the Vampire Authority.

Lambert was one of the two vampires who escort Jessica by order of Bill to ensure that she turns Jason into a vampire. Jason pretended to be dead after being bitten by Jessica. He then shot to Lambert and his partner Gondry, destroying them. ("Sunset")

Retrieved from "https://trueblood.fandom.com/wiki/Lambert?oldid=145273"
Community content is available under CC-BY-SA unless otherwise noted.