watch 02:10
'True Blood' Profile: Lafayette Reynolds
Do you like this video?
Play Sound 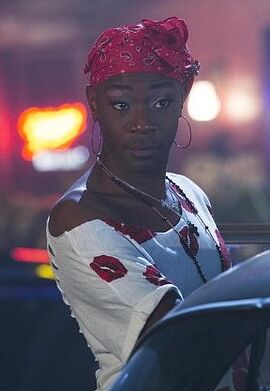 Lafayette Reynolds is a short order cook, a medium, and a major character on the HBO original series True Blood. Played by starring cast member Nelsan Ellis, Lafayette debuts on the episode "Strange Love" in the series' first season, and has remained a prominent character through the series' second, third, fourth, fifth, sixth, and seventh seasons. A short order cook at his local hometown restaurant Bellefleur's Bar and Grill, a popular local hangout formerly known as Merlotte's Bar and Grill, Lafayette spends most of his time located in his hometown of Bon Temps, Louisiana. The cousin of Tara Thornton, and the nephew of Lettie Mae Daniels, Lafayette is a medium that possesses a magical ability that allows him to make contact with the ghosts, or spirits, of Bon Temps deceased loved ones. After a relationship with the powerful brujo Jesus Velasquez, Lafayette has become possessed by a Mexican demon, giving him even more power.

Lafayette is a flamboyant, charismatic gay man. Despite partaking in very illegal activities to make ends meet, he's a good person at heart, and is careful not to harm his customers with the drugs he deals. He takes care of his loved ones, no matter what strange problems they have. He is suspicious and went through a lot in his life. He is the kind of guy with a dark sense of humor.

Lafayette may rake in cash doing things the cops frown upon, but that doesn't make him a bad person. He just knows how to have a good time, and he likes to make sure everyone else around him is having as much fun as he is. Though some people underestimate his toughness, but he's not afraid to stand up to anyone who mocks him. If you want to share your clothes and trade makeup tips with, then this short-order cook is your man. Just don't get involved with his shady business dealings. He's not exactly the perfect partner but his flamboyant personality will surely provide comic relief. There's never a dull moment when he's around.

Though he will never admit it, he cares for his friends and even goes out of his way to help Sam get Emma, even taking a beating by a female werewolf. He has helped many Bon Temps resident and also has a habit for being a flirt. His strongest relationship is with his cousin, Tara, but a deep down relationship is with his deceased ex-boyfriend, Jesus. Thanks to being a medium, he can talk to Jesus.

In Jesus Gonna Be Here, he is shocked by Tara's death and is paired up with James Kent whom escorts him to his home. He also tells James that he isn't going to get upset after Tara died (as a vampire) since he already mourned over her death (as a human), but it appears that he is heartbroken and devastated.

While the nature of his abilities are not explicitly stated in the series, Lafayette is noted by many (Ruby Jean Reynolds and Jesus Velasquez) to have strong mystical power within himself. His great-great grandmother was a practitioner of magic and is assumed that Lafayette has a natural affinity for magic as he was seen to successfully cast spells with Jesus' circle. During late Season 3, Lafayette began to experience visions and images of people and things, which was believed by Jesus to have been his latent magical potential awakened by the vampire blood he and Lafayette consumed. It was later revealed that Lafayette was a medium, allowing him to see and communicate with the spirits of the deceased. Due to this, Marnie possessed Lafayette at the end of Season 4. While under possession, Marnie forced Jesus to transfer his magic as well as the demonic spirit of his family into Lafayette's body, killing Jesus in the process. Though Marnie has crossed over, Jesus's magic still surfaces when Lafayette becomes emotional.

Like his cousin, he has a physical side and is a skilled hand-to-hand fighter. Because he is gay, people tend to underestimate Lafayette, but he has taken down human men. He might also be skilled in some type of marksmanship, because he has a shotgun, but never used it.

Retrieved from "https://trueblood.fandom.com/wiki/Lafayette_Reynolds?oldid=142825"
Community content is available under CC-BY-SA unless otherwise noted.