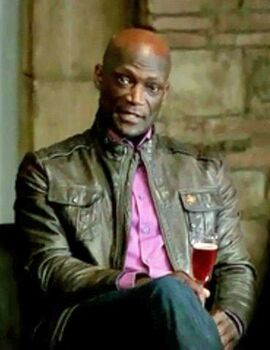 "They destroyed a very real threat to all vampires. If there is no documentation of humans being killed by vampires then we are infinitely better served letting them live."
―Kibwe[src]

Kibwe Akinjide is a recurring character in the fifth season. He is played by guest star Peter Mensah and debuts in "Authority Always Wins". He was an ancient African vampire and a Chancellor of the Vampire Authority. Serving under Guardian Roman Zimojic, he appeared to be among the more liberal-minded and peaceful of the Chancellors, believing in rehabilitation for lawbreakers, rather than punishment. In reality, however, he was deeply unconcerned for human life and gladly joined the Authority's new Sanguinista direction after Russell Edgington staked Zimojic and Salome Agrippa became the new Guardian. Like his colleagues, his devotion to goddess Lilith reached new levels after she appeared to him in a frenzy. Like with Bill Compton and Salome, he was later visited by another vision of her in which she told him he was chosen to lead vampirekind. Unfortunately for Kibwe, Bill Compton could not cope with Kibwe rivaling him for this unique position and decapitated the older vampire.

Kibwe is present when Bill Compton and Eric Northman are escorted in the Authority's office. Roman Zimojic recites a passage from the Vampire Bible, and gives each Chancellor two drops of his own blood. He excludes the traitor Nora Gainesborough, Eric's vampire sibling who is the second progeny of Godric. The chancellors discuss the death of Nan Flanagan (who met the True Death because of Bill) and considering if they should deliver the true death to Bill and Eric. Kibwe votes to save Bill and Eric from the True Death. ("Authority Always Wins")

After Russell Edgington is revealed to be alive Kibwe and Salome recommend further questioning with Bill and Eric. Roman assures him that he will take his opinion under advisement and sends the chancellors away, except Salome. ("Whatever I Am, You Made Me")

While tracking Bill and Eric's progress via the iStakes Kibwe theorizes that Russell truly is dead, and that Bill and Eric have concocted an elaborate charade in order to buy more time for themselves. He appears genuinely offended when Dieter and Rosalyn mock the Vampire Bible.

Kibwe tracks Bill and Eric's location on his laptop and arrives just in time to stop Russell from feeding on Sookie. As the Authority Police take Russell into custody, Kibwe suggests for Bill and Eric to glamour Sookie and Alcide and tends to the other captives. He deceives them, promising their safety and to glamour each of them. He loads them all onto a bus where he slaughters them all instead; he has turned against Roman's mainstreaming agenda.

Salome uses the recaptured Russell to stage a Sanguinista coup. She leaves him unrestrained during his planned execution so that he is able to overpower and kill Roman. ("Hopeless")

Salome reveals that she is responsible and conducts a ceremony to induct the Authority to the Sanguinista movement. Russell addresses the assembled vampires. He disavows his previous statements and says that he loves Lilith. Nora talks about their view that vampires have evolved from humans. She announces that everybody present will drink from Lilith's blood that night, gesturing to the vial on the dais. Chancellor Dieter protests that this is blasphemy. He says he has been part of the Authority since Roman founded it and that he will not go along with any of this. Before the Dieter can finish Russell decapitates him. Russell apologizes to Lilith. Everyone is silent. Bill asks Eric if they're really going along with it and Eric agrees saying they'll go with the flow.

The vampires who drank from Lilith wander around town in a drunk-like state, intimidating humans in the French Quarter of New Orleans. They descend on a private karaoke party/wedding rehearsal, Russell appears on stage and the guests freak out. The other vampires zoom into the room and attack the guests.

The vampire group are finishing off the human guests when they all look towards the stage and see a drop of blood hit the ground. Lilith manifests as a nude, blood-drenched woman. The apparition walks over to Nora and expels a red mist from her mouth. The mist hits Nora, further increasing her bloodlust. Nora smiles as she continues to feed from the human. The others are similarly affected. ("In the Beginning")

After the feeding frenzy in the karaoke bar, Kibwe expresses his belief in Lilith and her dedication to the Sanguinista ideology. Later, he joins with Salome, as the new Guardian. Russell, Bill and Eric are made chancellors and they meet to devise a plan to eliminate mainstreaming vampires. ("Somebody That I Used to Know")

After Eric and Molly are caught trying to escape Authority headquarters Kibwe is present at Molly's sentencing. He informs the tech expert that although they could invest time and effort to sway her to their side nobody believes she's worth the trouble.

He watches Steve Newlin's TV performance with Russell. He is mildly embarrassed when Russell lovingly complements Steve. His fellow chancellors walk in with Eric Northman in tow. Bill informs his colleagues of Chancellor Northman's conversion.

Russell questions the word of Lilith and suggests daywalking using Fae blood. This disgusts Kibwe, who says that vampires were created to roam the night only. When a fight between Salome and Russell ensues Kibwe wants to intervene but backs down when Russell proclaims that he is more powerful then all of them combined. Russell abandons the Authority to pursue his day walking dream. ("Gone, Gone, Gone")

When General Cavanaugh storms into Authority headquarters looking for Roman and threatening everybody present Kibwe eyes him angrily. He then informs the general that the former guardian was an infidel who opposed Lilith and was justly executed. Nevertheless Kibwe is both shocked and afraid when Eric kills Cavanaugh. He fears that humanity will rise up to destroy all vampires. Kibwe is later found by Bill inside the Authority's inner sanctum claiming that Lilith has elected him as leader of the vampire race. Bill, who has had similar visions, decapitates him. ("Sunset")

Retrieved from "https://trueblood.fandom.com/wiki/Kibwe_Akinjide?oldid=140275"
Community content is available under CC-BY-SA unless otherwise noted.