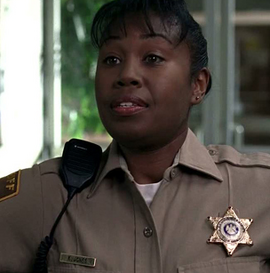 " Well I guess the only way to get a promotion in this town is to drink like a fish, hallucinate farm animals and kill a black man. Hey! Promotion!"
―Kenya Jones' view of events in Bon Temps, Louisiana[src]

Kenya Jones was a Deputy working for the Bon Temps Police Station on the HBO original series True Blood. Played by American guest starring actress Tanya Wright, Deputy Kenya Jones makes her debut on the episode "To Love Is to Bury" in the series' first season. Playing a recurring role through the same season, and returning as a guest starring actress through the series' second, third, fifth and seventh seasons, Kenya meets an untimely demise on the episode "Death is Not the End" in the series' seventh, and final, season.

Kenya works as a sheriff's deputy in the Bon Temps Police Department.

She is called to the scene of Tara's car accident and arrests her for driving under the influence of alcohol. She seems to be familiar with both Lettie Mae Daniels and Tara. Kenya shows a dislike towards Andy Bellefleur and begins working more closely with Sheriff Dearborne when Andy is removed from the force. ("To Love Is to Bury")

Kenya mocks Sheriff Andy when a naked picture of him is posted to Facebook. ("Whatever I Am, You Made Me")

Deputy Kevin Ellis questions Andy Bellefleur at the scene of the shooting of Stake House clerk Junior by Sam Merlotte. Kenya stands by as Sam sniffs around for clues in the back of the store, watching him quizzically. Sam's acute sense of smell draws him to a strange box. He tells Kenya to open the box because she is wearing gloves. When she does so, they find it full of the Obama masks the anti-supernatural murderers have been using. Sam rolls on his back on the floor sniffing. He tells Kenya about the shooter's poor diets and lifestyle. Kenya is concerned and asks Sam if there's anything she should know. Sam looks up sheepishly and says "...no." ("In the Beginning")

Joe Bob is arrested as a suspect in the supernatural murders. Andy and Jason beat up Joe Bob while Kenya is in the station. They later realize that Bud Dearborne is a link between Joe Bob and Junior and raid his farm. They find him with hostages and shoot him when he attempts to attack them. ("Everybody Wants to Rule the World")

While Jason and Andy investigate the origins of a deceased woman Sookie Stackhouse found in the woods, Kenya is left in charge of the station. When Adilyn Bellefleur and Wade Cleary appear to warn her of the Bon Temps residents' plan to steal all the guns in attempt to solve the Hep-V crisis themselves, Kenya prepares to repel them. However, when Karen appeals to her bitterness toward being overshadowed by Jason (despite her superior capabilities as an officer) and the lack of respect Andy has shown her, Kenya sides with the residents and allows them access to the armory. ("I Found You")

Continuing to side with the mob lead by Vince, Kenya participates in a battle to defeat the Hep-V vamps seeking refuge in Fangtasia. Though she does manage to deal a serious blow to their numbers, she is eventually killed herself before the battle's end. ("Death is Not the End")