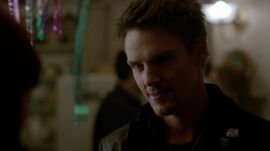 Keith is a vampire on the HBO original series True Blood. Played by the American actor Riley Smith, Keith makes his debut on the episode "Death is Not the End" in the series' seventh season. Playing the role of a vampire and eventual love interest of Arlene Fowler Bellefleur, Keith plays a recurring role through the same season, and was last seen in the series' finale episode, "Thank You", in the series' seventh, and final, season.

Keith is kind and good-natured. He is very friendly and smooth with women.

Keith is a kind-hearted and friendly vampire, who is seen helping out Arlene and her friends whenever possible. He takes a liking to Arlene and eventually they engage in a romantic relationship. At one point it is said that Keith is 515 years old. His good nature and moral character may be a result of his advanced age and, therefore, his personal evolution.

"Death is Not the End"[edit | edit source]

Keith, friends and bandmates with James, joins the group that attend to the rescue of the humans taken by the Hep-V vampires. When Arlene is near dying after being fed on by the group of Hep-Vamps, he is brought in as a healthy vampire to heal her.

Keith is present at the house party, where he flirts with Arlene briefly.

"May Be The Last Time"

Arlene is closing the bar and Keith arrives, offering to escort her home since it's nighttime. He makes sexual advances on her and she resists briefly before they begin to make love on the pool table. It is then revealed this was a dream brought on by her ingesting Keith's blood. Later in the episode, Keith appears at the bar, and assures Arlene she is not dreaming and says he came when he felt her pain. She reveals to him after the attack by the Hep-V vampires she suffered at Fangtasia, she is Hep-V positive so they cannot have sex. He asks her just to dance with him instead.

Retrieved from "https://trueblood.fandom.com/wiki/Keith?oldid=145241"
Community content is available under CC-BY-SA unless otherwise noted.