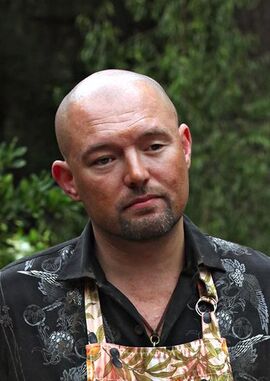 Karl was the manservant, or, chef and maid, of Maryann Forrester on the HBO original series True Blood. Played by American co-starring actor Adam Leadbeater, Karl makes his debut on the episode "You'll Be the Death of Me" at the end of the series' first season. Faithfully performing a number of services for Maryann, Karl was aware of her true status and goals. Playing a recurring role through the series' second season, Karl met an untimely demise in the Season 2 episode "Frenzy".

Karl was a manservant of Maryann Forrester.

Karl was first seen at the end of season 1. When Maryann took Tara to her house to stay, Tara woke up the next morning and went out on the patio. Karl came out of the house carrying a tray of food, and put it on the table. Tara introduced herself, and sat down. Karl very politely made sure Tara had everything she needed, without saying a word and went back in the house. Later, while cleaning Tara's room, Karl finds Tara's cell phone ringing with a call from Sam Merlotte. Instead of informing Tara, he simply pockets her cell phone. ("You'll Be the Death of Me")

Karl was a man of few words, hardly interacting with anyone other than Maryann Forrester and Eggs Talley Karl blindly worshiped Maryann until his last breath, he was mortally wounded when Lafayette fired a bullet intended for her. She deflected the shot with her outstretched palm, causing the bullet to ricochet into the side of Karl's head-killing him instantly. After the briefest of moments, Maryann summed up his life with a single sentence: "You didn't really advance much in this lifetime."—as close to true sentiment as she was capable of.

On the 'enhanced features' portion of the Blu-ray season 2 set, Karl gives us many clues as to Maryann's origins, practices, and (what he believes to be) the many methods to her madness. Karl met Maryann one blustery day in October, while savoring a Bavarian brew and feasting on knuckled pork at Hoffbraur House in Munich during OctoberFest 2005. As he recalls, the grand doors of the hall burst open and a boisterous group of Australian rugby players paraded in with a smiling Maryann atop their shoulders. Karl fell in love at first sight, stating that, for the first time in his life, all doubt was abated and he found his true life's purpose-to be near Maryann in whatever capacity he could- when she asked him to carry the train of her gown. He was a skilled cook, loyal servant and doting companion-often bearing the brunt of her rage, rarely receiving subtle praises and always taking note of her endless mantras ("Being terrified is the body's way of telling you greatness is near." "Feeling sorry for things is just an excuse not to celebrate your own happiness."). It's unclear whether Karl was entirely human, as he was seemingly immune to Maryann's primeval energies; although, he explains that her influence (namely the dilation of the pupils while frenzied) does not affect him due to a freak childhood incident that he does not care to explain further.

It's possible that Karl was another form of shapeshifter or supernatural creature (though it's unlikely, as she would've long sacrificed him-a la Daphne), but it was never stated nor implied in the series. Another theory is that Karl may have been a eunuch (freak childhood incident?) and simply did not have the sexuality necessary for Maryann to control him. Even more theories abound about his possible supernatural identity. These theories include a species whose sole purpose in life is to serve. This is not unheard of in the science fiction and/or fantasy genres, but again, if he were a supernatural being Maryann would've eventually sacrificed him for her god except that if that supposed species was unimportant for her goals. Another question is if he was might be a satyr (which would seem coherent with Maryann and her background). However, satyrs–if adhering to Greek mythology–are not known to be subservient or appear human. One final theory speculates if he have been merely a human acolyte whom Maryann chose not to overtake or was possibly grooming to be a male version of a Maenad, a Satyr maybe—a kind of high priest of Dionysus. According to this, the comments Maryann made to and about Karl referred to his progression towards attaining immortality and other maenad abilities. Especially when he died she said about his progression in lifetime something obvious about his real identity. If this theory proved true, the question of identifying what the male equivalent to a maenad is would arise. The satyr theory could find ground in this scenario.