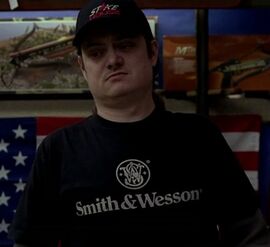 Junior was a clerk at the Stake House on the HBO original series True Blood. Played by American guest starring actor Todd Giebenhain, Junior makes his debut on the episode "Authority Always Wins" in the series' fifth season. The clerk of a weapons store targeted at humans wanting to defend themselves against vampires, and a member of the "Obamas", a low-rent anti-supernatural hate group, Junior met an untimely demise on the episode "Hopeless", in the same season.

Sookie goes to the Stake House to find supplies to bind Tara while she is in captivity. There she sees Steve Newlin on television now explaining he is still a Christian but a vampire as well. The salesman is obviously mad, saying he use to be his hero. He offers a "silver mister" to her. Telepathically, Sookie listens to the clerk's thoughts. He mentions a vamp killing and that she would fuck him after. Sookie then states that killing a vampire or human is against the law.("Authority Always Wins")

After the attempted shooting of Sam and Luna, Sheriff Andy Bellefleur visits the Stake House to get information on sales of wooden bullets. Junior attempts to shoot Andy, only to be shot with a crossbow by Sam. ("Hopeless")