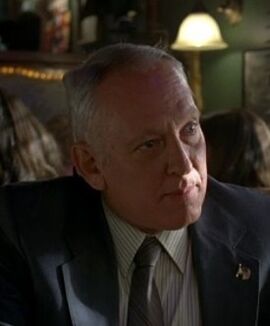 Judge Clements is an influential Renard Parish judge on the HBO original series True Blood. Played by American guest starring actor Conor O'Farrell, Judge Clements makes his debut on the episode "Turn! Turn! Turn!", at the beginning of the series' fifth season. He appears once more, on the episode "We’ll Meet Again", in the same season.

Judge Clements approaches Andy and tells him that Deputy Kevin Ellis made the mistake of giving his son Ronny a speeding ticket. He said he gave him a ticket going 75 in a 25. Andy feels a bit bullied by the Judge's political power and says that Kevin's radar had been broken and that he'd dismiss the ticket. ("Turn! Turn! Turn!")

Judge Clements visits Andy at the Bon Temps Sheriff's Department and teases him about a nude picture that appeared on Facebook while also thanking him for clearing the speeding ticket. The Judge then invites Andy and Jason out for the night to celebrate, pointedly excluding Deputy Kevin Ellis. Clements than says he will meet them at the station later that night, teasing Andy once more as he leaves.

Judge Clements, Andy and Jason get into a limousine with three beautiful women Delilah, Angelica, and Lilianne. As they sit, bags are placed over their heads. Jason and Andy grow paranoid, but Judge Clements assures them that it's okay and seems to be enjoying it. One of the girls tells the chauffeur to drive.

Andy, Jason and Judge Clements are still wearing bags over their heads as they are walked into a field by the girls. Their escorts open a portal to a mysterious nightclub and take the three men inside. The bags are removed so that they can take in the nightclub setting. Judge Clements leaves with one girl. Jason and Andy also meet willing escorts but get into trouble after Jason recognizes his cousin Hadley Hale among the staff and are thrown out. ("We’ll Meet Again")