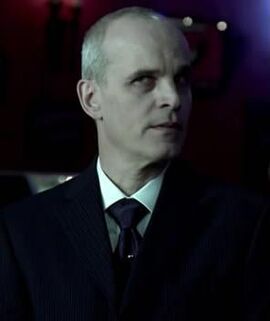 "Do you question my authority? I am the Magister. I was trained in the Inquisition and I am the adjudicator for every vampire territory in North America! As the humans say, the humans you love more than your own kind, back your shit down!"
―Jorge Alonso de San Diego[src]

Jorge Alonso de San Diego, born in 1484 in Andalucia, Spain, was a Vampire on the HBO original series True Blood. Played by Slovenian-American actor Željko Ivanek, Jorge, better known as the "Magister", makes his debut on the episode "I Don't Wanna Know" in the series' first season. The pride of his relatively poor family when ordained as a monk in 1484, Jorge was a fervent believer in the necessity of the Spanish Inquisition. He became one of the most feared "inquisitors" in Seville, and oversaw countless trials and executions, including some of his own relatives. When made a vampire against his will, as retribution for his role in the Counter-Reformation, he turned his misfortune into an opportunity to continue to pursue the same goals he had in life: rooting out subversives and heretics to uphold the common good.

Posing as a human for centuries, he served as an adviser to Soviet dictator Joseph Stalin and as Adolf Eichmann’s right-hand man. Shortly after World War II he was tapped to be Vampire Magister of North America, where he relished his power to implement the laws of his own kind for eternity. Playing a recurring role through the series' first, third, and seventh seasons, Jorge serves as a supporting antagonist of the series' third season. Murdered by Russell Edgington, the Vampire King of Mississippi, after he pronounces him and Queen Sophie-Anne man and wife, Jorge meets an untimely death in the Season 3 episode "Hitting the Ground", and was last seen in a flashback on the episode "Death is Not the End" in the series' seventh, and final, season.

"Torture? This? I don't think so. I could show you torture, if you like?"
―Jorge Alonso de San Diego, to Bill Compton[src]

The Magister was tyrannic, intimidating, overpowering, sanctimonious and enjoyed exploiting his superiority over helpless beings including humans and even other vampires. Because of this, many vampires were intimidated by him due to his political power and advanced age. He considered humans to be lesser beings and considered humans nothing but servants. Jorge was also extremely dogmatic. Whether he was serving the catholic church or the vampire authority, he followed both with religious fervor. Though the Magister enjoyed inflicting pain on others his own pain threshold seemed to be low. He was also very dutiful and had a strong personal code of honor. His sense of justice was strong but harsh.

"The Magister! A nasty, anachronistic toad, a ridiculous remnant of the Middle Ages. The only power he has over us is the power we give him."
―Russell Edgington[src]

Jorge was born in Andalucia, Spain to a relatively poor family. He eventually joined the Roman Catholic Church, and was ordained as a monk in 1484. During this time he become a fervent believer in the necessity of the Spanish Inquisition, and became one of the more feared Inquisitors in Seville, overseeing countless trials and executions, including members of his own family. In 1525 he was "made" into a vampire against his will, as punishment for his role in the Counter-Reformation. Initially depressed by his newfound immortality, he soon learned how to turn his misfortune into an opportunity to continue to pursue the same goals he had in life: rooting out subversives and heretics to uphold the common good.

As a vampire, Jorge eventually found employment in Communist Russia, where he served as an adviser to Soviet dictator Joseph Stalin. He did not remain in this position for long, however, as he soon relocated to Nazi Germany, becoming Adolf Eichmann’s right-hand man. Shortly after the conclusion of World War II he began working for the Authority, and was appointed the Vampire Magister of North America, becoming known exclusively as the "Magister".

Jorge held a session of the Tribunal in the middle of the desert the night Bill Compton was charged for the death of Longshadow. Before Bill's trial, the Magister had ordered the Tribunal's enforcer, Luisa, to rip out the fangs of a vampire charged with feeding on a human owned by another vampire. When informed of Longshadow's death at Bill's hands, the Magister planned on sentencing Bill to being chained with silver chains inside a coffin for five straight years.

This would have caused Bill to lose his sanity, but Bill countered that he had done so to defend his human, Sookie Stackhouse, an act the Magister found irrelevant. However, the Magister commuted the sentence when Bill revealed he had killed Longshadow as an act of loyalty towards his Sheriff, Eric Northman, who had been robbed by Longshadow. He had acted to protect Eric's wealth. Because of this, the Magister ordered Bill to make up for Longshadow's death by making a new vampire. At first Bill resisted transforming the teenager, Jessica Hamby, but ultimately relented to prevent both of them from being killed. ("I Don't Wanna Know")

At the start of Season 3, The Magister visits Eric at Fangtasia, alongside queen Sophie-Anne Leclerq. They both inform Eric that they suspect a vampire in Her Majesty's kingdom is selling "V" to the humans. Unbeknownst to The Magister although who suspects it, it is actually the Queen herself that is supplying the V, and Eric who is trafficking it. ("Bad Blood")

Days later his men search Fangtasia and find vials of "V". He arrests Pam, but when Eric arrives Pam places the blame on Bill Compton. The Magister gives Eric two days to bring Bill to him or he'll execute Pam. ("9 Crimes")

The Magister tortures Pam until Eric returns two days later accompanied by Russell Edgington and Sophie-Anne. Eric reveals that he sold "V" for the Queen but before the Magister can arrest her, Russell announces that he will marry Sophie-Anne and pay her debts to the IRS. When the Magister refuses to officiate the ceremony, Russell releases Pam and chains the Magister on a table. He tortures him until the Magister marries them. Continuing to declare his allegiance to the Authority, Russell decapitates him. ("Hitting the Ground")

Jorge possessed the common powers and abilities of a vampire. He was stronger than younger vampires such as Bill Compton and Pam but far weaker than Russell Edgington and Eric Northman.