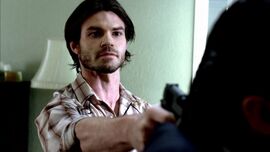 Jon was a boyfriend of Charlene on the HBO original series True Blood. Played by Canadian actor Daniel Gillies, Jon is a thief trying to rob Sam Merlotte, and meets an untimely demise at the hands of Sam during his only appearance, on the episode "I Smell a Rat" in the series' third season.

Charlene and Sam stole some jewelry. He took the jewelry to fence. It was revealed that Charlene was in on that plan. Sam later came after them and, using their own gun, demanded his money back. Jon taunted Sam, saying that after being with Sam, Charlene would always come back to him. Sam lost his temper and started beating on him, while Charlene found a gun and started to look for the rest of the money. She shot at Sam to get him off Jon. Sam shot back out of self-defense and instinct, but his bullet found its mark—killing Charlene very quickly. After that Sam killed Jon, too. ("I Smell a Rat")

Retrieved from "https://trueblood.fandom.com/wiki/Jon?oldid=143190"
Community content is available under CC-BY-SA unless otherwise noted.