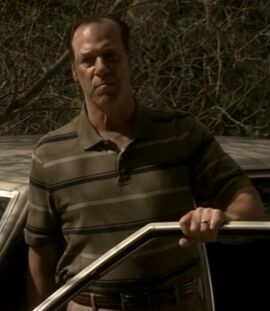 Colonel John Flood was a full-blooded werewolf, and the packmaster of Jackson, Mississippi, on the HBO original series True Blood. Played by American actor Grainger Hines, Colonel Flood appears only on the episode "Trouble" in the series' third season.

Although he presented himself with a demeanor of dominance to secure loyalty from his wolves - a necessity among alphas - John was in fact terrified of Russell Edgington and intended to leave town and abandon his pack solely to save himself; showing a spineless and selfish nature.

Colonel John Flood who is described as the Wolf Pack Alpha in his 50s to 60s who is self-assured, and dressed like a golfer with a military haircut. He is a retired Air Force Colonel, formerly stationed at Barksdale Air Force Base in Bossier City, Louisiana. Apparently he doesn't react the way Sookie and Alcide expect to recent events.

Alcide contacts the Colonel to discuss his discovery that Cooter's pack serves Russell Edgington and that they are addicted to "V". The Colonel reveals that he was aware of this and that Russell is the vampire king of Mississippi. Sookie reads the colonel's mind and discovers that the colonel is afraid for his life and plans to run out of town. ("Trouble")

Retrieved from "https://trueblood.fandom.com/wiki/John_Flood?oldid=145110"
Community content is available under CC-BY-SA unless otherwise noted.