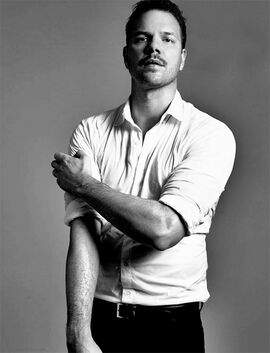 Jim Parrack, born February 8, 1981 in Allen, Texas, is an American actor who plays the role of Hoyt Fortenberry on the HBO original series True Blood. Making his debut in the series' premiere episode, "Strange Love" in the series' first season, Jim is a resident of Bon Temps, Louisiana, who works for the State of Louisiana Department of Transportation road crew along with Lafayette Reynolds, under the direction of Jason Stackhouse. Playing a recurring role through the series' first, second, third, fourth, and fifth season, Jim was in a relationship with the young vampire Jessica Hamby, and moved to Alaska after they broke up. He returns to play a recurring role through the series' seventh season, and winds up marrying Jessica Hamby in the series' finale episode, "Thank You", in the series' seventh, and final, season.

Retrieved from "https://trueblood.fandom.com/wiki/Jim_Parrack?oldid=140627"
Community content is available under CC-BY-SA unless otherwise noted.