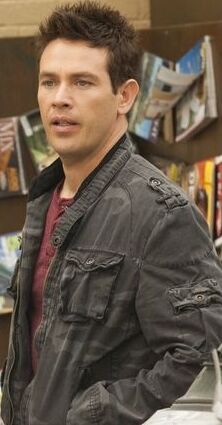 Jesús Velásquez (pronounced heh-soos) was a brujo on the HBO original series True Blood. Played by American starring actor Kevin Alejandro, Jesús makes his debut on the episode "Beautifully Broken" in the series' third season. A brujo of Mexican origin, Jesús was the longtime boyfriend of Lafayette Reynolds, and plays a recurring role through the series' third and fourth seasons. Having met his partner while being employed as a medical nurse for Lafayette's mother Ruby Jean, Jesús discovered that Lafayette was "powerful" and carefully introduced him to witchcraft, magic, and mediumship. Eventually managing to get Lafayette to join the witch coven of Marnie Stonebrook, a friend of his, Jesús met an untimely demise on the episode "And When I Die", at the end of the series' fourth season. He appears as a ghost on the episode "Let's Boot and Rally", in the series' fifth season, plays a recurring role through the same season, and makes his final appearance in the Season 5 episode "Somebody That I Used to Know".

Jesus was a very caring and compassionate person. He would always try to help others with their problems, evidenced by his profession as a nurse.

He showed his helpful side by helping Mavis find her and her son's bodies so she could move on. He also risked his life to help Sookie when she was captured by Marnie.

While the nature of his abilities are not explicitly stated in the series, it was later revealed that Jesus was a brujo, allowing him to see and awaken the darkness passed down in his family. His grandfather Don Bartolo was a practitioner of magic and is assumed that Jesus has a natural affinity for magic as he was seen to successfully cast spells. Due to this, he is able to produce fire and can break even the strongest of spells (such as the spell Marnie used to bind Antonia to her, using Antonia's magic). While under possession, Marnie forced Jesus to transfer his magic to Lafayette's body, killing Jesus in the process. Jesus is now a ghost and can communicate with Lafayette in ghost form. Jesus' magic still surfaces when Lafayette becomes emotional.

An attractive Latino orderly in his 20s to 30s. We come to learn he is a gay, Latino, attractive orderly! He’s feeding Ruby Jean at her care facility. As good-natured as he is handsome, he takes his demented patient’s racist gibes in stride…VERY STRONG RECURRING POSSIBLE OPTION FOR SERIES REGULAR NEXT SEASON THIS ROLE FIRST APPEARS IN EPISODE 3.02