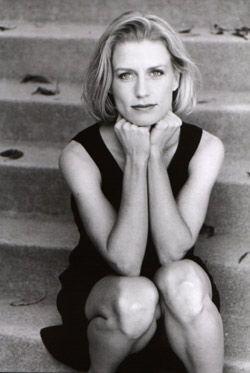 Jessica Ines Tuck, born February 19, 1963 in New York City, New York, is an American actress who plays the role of Nan Flanagan on the HBO original series True Blood. Making her debut in the series' premiere episode, "Strange Love", at the beginning of the series' first season, Jessica plays the role of the official American Vampire League spokesperson. A prominent vampire rights activist and key vampire spokesperson who spoke on the behalf of the AVL, Jessica was often seen on television debating over the rights entitled to her species, but off-camera however, she displayed a ruthless attitude and focused on pushing through the AVL's agenda. Playing a recurring role through the series' first, second, third and fourth seasons, Jessica was a figure of authority among vampires, being both a member and a representative of The Vampire Authority, and ranked higher than most vampire monarchs and sheriffs. Jessica had the power to execute, fire and appoint sheriffs and monarchs, and met an untimely demise on the episode "And When I Die" and made her final appearance on the episode "Fire in the Hole" in the series seventh, and final, season.

Tuck was born in New York City and is a graduate of Yale University and Middlesex School. She played Megan Gordon Harrison on the soap opera One Life to Live from 1988 to 1992. She reprised the role in spirit form in 1993, 1999, and 2004. She has also played the role of Gillian Gray on Judging Amy.

Tuck played Nicole Brown Simpson in the TV movie The O.J. Simpson Story, and had a leading role in the Olsen twins' straight-to-video movie Billboard Dad. In 1992, she was nominated for a Daytime Emmy Award for "Outstanding Lead Actress in a Drama Series" for her performance in One Life to Live. In 1990 she was nominated for a Soap Opera Digest Award for "Outstanding Female Newcomer: Daytime" for the same role. She is in High School Musical 2 and 3 as Mrs. Evans, the mother of Ryan (Lucas Grabeel) and Sharpay Evans (Ashley Tisdale).

Tuck is known for her roles on daytime and prime time TV dramas.