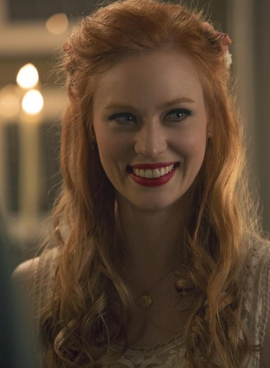 "Who the fuck I am is an older vampire than you. Who I also am is the progeny of the King of Louisiana who happens to be out of town, which pretty much makes me the Queen."
―Jessica Hamby, to Steve Newlin[src]

Jessica Hamby was a vampire on the HBO original series True Blood. Played by American starring actress Deborah Ann Woll, Jessica makes her debut on the episode "I Don't Wanna Know" in the series' first season. Born in 1991, and turned into a vampire in 2009, Jessica is the progeny of Bill Compton, the Vampire King of Louisiana. Turned as decreed by the vampire Magister, in reparation for Bill's murder of Longshadow, a fellow vampire, Jessica plays a recurring role through the series' first, second, third, fourth, fifth, sixth and seventh seasons. Formerly in a relationship with Bon Temps local Hoyt Fortenberry, the couple moved in together and lived happily until the end of 2009, when, no longer able to deny her vampire instincts and confine herself to a monogamous relationship, Jessica ended things with Hoyt and returned to her maker's home. She was last seen in the series' finale episode, "Thank You", in the series' seventh, and final, season.

Jessica was raised in a strict and devout Christian family in Shreveport, Louisiana. Jessica and her younger sister Eden were home schooled by their parents. They where not allowed to go out and only went to Bible study and clarinet lessons. Jessica's father would often beat Jessica with his belt to punish her for any faults in her chores or behavior. Jessica's mother was oblivious to this abuse, which Jessica attributed to her mother's "stupidness". Jessica resented the restrictions of her life dearly and secretly developed a rebellious attitude to her father's dominance.

When she became a vampire, she began to explore different feelings and became more open to the world around her. She proves to be deeply insightful at times while showing her naivety at others. Though she's a teenager physically, she is able to mature and grow. She has dealt with traumas like losing her first love (Hoyt) and her family, as well as the violence specific to her circumstances as a newly turned young vampire.

Jessica's religious upbringing still resonates within her. She does not live according to her human parent's standards but when Bill appeared to have become more powerful and shared his dystopian vision regarding many vampire's fate, Jessica among them, she began to pray.  Jessica has openly admitted on many occasions that she likes feeding on humans and generally detests True Blood, but she is a supporter of the Mainstreaming cause.  Her first uncontrolled attempt to feed on a human resulted in his death, but she takes greater care not to injure the humans she feeds on now.  The only other times she has killed while feeding were either in combat (such as one of Russell Edgington's werewolves) or when she lost control around Andy Bellefleur's half-fae daughters due to the scent of their hybrid blood.

Jessica feels remorse for the death of Andy's halfling daughters she caused. Even though she is a young vampire prone to blood lust and drawn to fairy blood, she is not ruthless.  Like her maker, she tries hard to hold on to her humanity.

Jessica has all the powers of a vampire, including superhuman strength, speed, senses, immortality and healing. Bill teaches her the common vampire ability to glamour humans, and she seems to have a naturally heightened talent for it, as Bill finds it difficult to override her glamour of Leon.

She also recently demonstrated that she can glamour as many as two people simultaneously, something Eric (an Elder) did not or could not do when dealing with multiple Soldiers of the Sun. She overpowers her father, a man much larger than her, and eviscerates a werewolf.

After drinking the blood of her maker Bill, she gained the ability to Daywalk. With Warlow's death she lost that ability. Due to her age, she is weaker than her superiors. Her weaknesses include a stake to the heart, silver, UV or sun light and fire. ("Life Matters")

Bill: "To your room, please. Tru Blood."
Jessica: "You are going to be so sorry when I get an eatin' disorder!"

Jessica:: You're cute. Can I sit on your lap?
Eric: No.
Jessica:: (whining) Why? Nobody let's me have any fun. Fuckers!


Bill: Because you are no longer human.
Jessica: Why?
Bill: Because, as I've been trying to explain to you at length, you have been made vampire!
Jessica: (suddenly scared) Why?