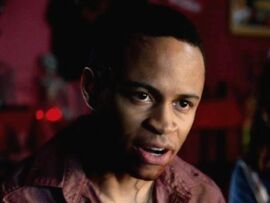 Jerome was a vampire on the HBO original series True Blood. Played by American actor Eugene Byrd, Jerome makes his debut on the episode "I Found You", at the beginning of the series' seventh season. Playing the role of a vampire trucker infected with the Hepatitis V virus, Jerome plays a recurring role through the same season, and meets an untimely demise on the episode "Fire in the Hole" in the series seventh, and final, season.

Jerome, along with a large group of infected vampires, are holed up in Fangtasia trying to survive the Hep-V outbreak. They have captured a number of humans and are holding them captive in the basement of Fangtasia, feeding on them when they need to. On the surface, Jerome appears to be the leader of this group and doles out responsibilities to the other vampires, such as who will choose a human that they should eat, and who should keep watch while the rest of the vampires sleep. Jerome scolds one of the vampires for completely draining one of their captives, thus drastically cutting their food supply. ("I Found You")

Jerome goes out with a group of other infected vampires, seemingly on the hunt for humans, with Holly in tow. They come across a few unlucky humans, and take them back to Fangtasia. Later, Jerome and his group encounter Sookie, who is using herself as bait to lure out the Hep-V vampires. Bill, Sam, and Alcide protect Sookie from the vampires, and during the fight Jerome is destroyed by Alcide in his wolf form. ("Fire in the Hole")

Retrieved from "https://trueblood.fandom.com/wiki/Jerome?oldid=143107"
Community content is available under CC-BY-SA unless otherwise noted.