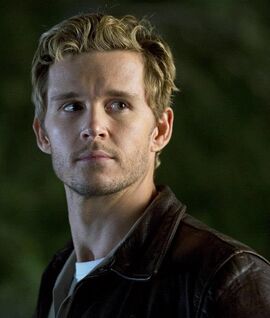 "God gave that boy a penis and a brain, and only enough blood to run one of 'em."
―Tracy, on Jason Stackhouse[src]

Jason W. Stackhouse is the brother of protagonist Sookie Stackhouse on the HBO original series True Blood. Played by Australian starring actor Ryan Kwanten, and American child actor Labon Hester during flashbacks of a young Jason, Jason makes his debut in the series' premiere episode, "Strange Love", in the series' first season. A sheriff deputy working for the Bon Temps Police Station in the small town of Bon Temps, Louisiana, Jason was a womanizer and former member of the Fellowship of the Sun. Playing a recurring role through the series' first, second, third, fourth, fifth, sixth, and seventh seasons, Jason marries Brigette, a microbiologist from Alaska, and the former girlfriend of Jason's best friend since childhood Hoyt Fortenberry. One of only four characters to appear in every episode, the other three being his sister Sookie, vampire Bill Compton and Merlotte's Bar and Grill short order cook Lafayette Reynolds, Jason was last seen in the series' finale episode, "Thank You", in the series' seventh, and final season.

Jason is the older brother of Sookie Stackhouse. For the first three seasons, he works alongside Hoyt Fortenberry and Lafayette Reynolds on a road crew. Since Season 4, he is the deputy of the Renard Parish police department. Jason is a former high school football player, and is known around his small town of Bon Temps as the local womanizer, having bedded nearly every young woman in town. He is caring and brave, but can also be very impulsive, which has manifested as rushing headfirst into danger on several situations. His impulsive nature has often led him down negative paths, and has been expressed with an on/off bigotry against vampires which includes a temporary membership with the anti-vampire church, the Fellowship of the Sun.

Although Jason is not particularly uneducated or mentally incompetent, he is often portrayed as somewhat slow-witted and makes many comical semantic errors and malapropisms, such as "It's like if a tree falls in the woods, it's still a tree, ain't it?" ("Beyond Here Lies Nothin'") However, he has an enduring desire of self-improvement, and always strives to become a better person. This leads him to overcome an addiction to vampire blood by quitting cold turkey, and, later on, joining the local police force (although, he initially attempts to cheat his way in).

Jason is shown to be very brave and willing to stand up for what he believes in. He frequently puts himself at risk to protect others and is very dedicated to his duties as a police officer.

Jason is fully human, but he is of Fae heritage, having descended from Niall Brigant, the king of his Fae tribe. Although he is not a Faerie, remnants of his heritage have been expressed through being exceptionally good-looking and being naturally seductive. Throughout the series, Jason has had numerous girlfriends and sexual conquests; he has arguably had the most sex scenes of anyone else in the cast. However, his inability to maintain a relationship for more than a few weeks has troubled him greatly, and he takes to heart when his former best friend, Hoyt Fortenberry, angrily tells him that his personality is too deficient for a long-term relationship. Brigette says that this was not fair and that Jason is sweet and kind.

Jason is fully human, but he is of Fae heritage, having descended from Niall Brigant, the king of his Fae tribe. Although he is not a Faerie like his sister, remnants of his heritage have been expressed through being exceptionally good-looking and being naturally seductive.

As a former high school football quarterback, Jason has remained very athletic and maintains his fitness levels with a strict workout regimen.

Due to his training as a police officer and his short stint in a paramilitary group, -- the Soldiers of the Sun -- he is quite proficient at hand-to-hand combat, and is a very accurate shot with firearms. He is seen killing more vampires than any other human portrayed in the series (none of whom were innocent). After killing several vampires in combat he says to Nora, "I've had lots of practice killing your kind." ("Who Are You, Really?") Violet Mazurski takes an interest in him because she sees him as a "warrior."

In the book series "The Southern Vampire Mysteries", Jason is turned into a werepanther, and, as such, can shift at will from human form to panther. In the HBO series, this does not occur because the Panther, like werewolves and shapeshifters, is hereditary.