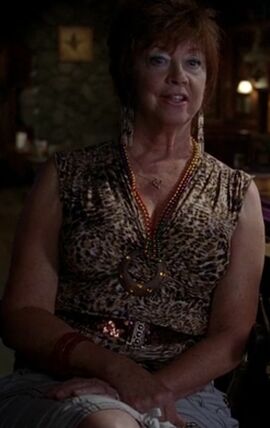 "If someone had told me I’d die sober in a bar..."
―Jane Bodehouse[src]

Jane Bodehouse is a minor character on the HBO original series True Blood. Played by American actress Patricia Bethune, Jane was a middle-aged woman who usually stayed drunk. Making her debut on the episode "The First Taste" in the series' first season, most of Jane's free time was spent at Merlotte's Bar and Grill, drinking until she reached a state in which bartender Tara Thornton would have to call Jane's son to come and pick her up. She had also found herself under Maryann Forrester's evil possession. Maryann took control of Jane, and Jane became so possessed, in fact, that she cut off one of her own fingers. Jane played a recurring role through the series' first, second, fifth, sixth, and seventh seasons. Jane was last seen living happily with her new vampire suitor, as of the series' finale episode, "Thank You", in the series' seventh, and final, season.

Jane Bodehouse is a middle-aged woman who loves to drink.

Jane is drinking at the bar at Merlotte's, having cheap drinks. ("The First Taste")

Jane is again drinking at the bar at Merlotte's, trying to flirt with Eggs Benedict. Later that evening she is the first person we see who is caught under Maryann Forrester's spell. ("Keep This Party Going")

At the end of season 2, she was in Sookie's house, which had also been occupied by Maryann, and was under Maryann's influence. When Sookie was trying to sneak into her home unnoticed, she found Jane in the kitchen cutting off one of her fingers. ("Frenzy")

Jane is at Merlotte's telling people about how her finger was cut off. She doesn't remember the real version of it. Andy Bellefleur tells her she cut it off herself, and she laughs, claiming he is drunk.

Jane was also one of Maryann's bridesmaids, helping her prepare for her "wedding". After Maryann's death, Jane like the rest of the townspeople, had no recollection of the events that occurred and was taken to the hospital to treat her hand injury. ("Beyond Here Lies Nothin'")

Jane is sitting at the bar at Merlotte's. She tells Andy Bellefleur she thinks they once slept with each other at some point. (Referring to Season 2)

She is greatly amused when the faery Maurella arrives and gives birth to four babies on the pool table. ("Save Yourself")

Jane is seen attending the funeral of Terry Bellefleur, sitting next to Maxine Fortenberry. ("Life Matters")

Jane is caught by one of the Hep-V infected vampires. Later that night she is held in the basement of Fangtasia along with Arlene Bellefleur, Holly Cleary, Nicole Wright and Kevin Ellis. ("Jesus Gonna Be Here")

Jane is seated at Sookie's Thanksgiving dinner in 2014. The man seated next to her appears to be her boyfriend or husband. He has his arm around her and is drinking New Blood. So the series ends with Jane Bodehouse involved with a vampire. ("Thank You")

Retrieved from "https://trueblood.fandom.com/wiki/Jane_Bodehouse?oldid=143625"
Community content is available under CC-BY-SA unless otherwise noted.