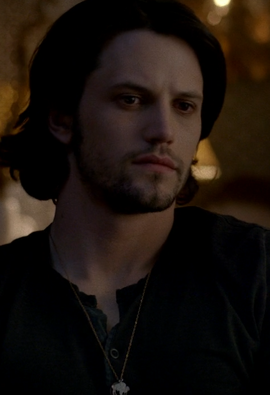 "I believe that vampires chose to forfeit their souls. I mean I'm not saying I'm a saint but I made a different choice."
―James Kent[src]

James Kent is a vampire that appears in the sixth and seventh seasons of True Blood. He is portrayed by Luke Grimes in the sixth season and Nathan Parsons in the seventh.

James is a highly intelligent vampire, and is described as sexy, compassionate, and protective. He possesses a "poet's soul", and plays the guitar. He is uniquely noble among his kind, as he shows to Jessica when he refuses to have sex with her and has one of his fangs broken as a result. James feels that some vampires think they have to "forfeit their souls" when they are turned but he disagrees. He says that he just decided not to let his humanity go, and it was just that simple for him. He is very decent, generous, and kind-hearted.

While his birth-date is never mentioned, James was most likely born during the late 1940's-early 1950's. James had a best friend named Danny Monahan; whom lived across the street from him since they were kids. They were also romantically involved. He was against the Vietnam War, but had many friends who died during their military service.

When James was visiting his family one year for Christmas, he found out that Danny was killed in The Battle of Huế. He went over to the Monahan's house to pay his respects, but was severely beaten by Mr. Monahan with Danny's old baseball bat from High School, and called a "hippie faggot". After he was left in the street to die, a local vampire found James and changed him out of pity.

James is first introduced to Jessica at the vampire camp secretly run by Truman Burrell. In order to convince Jason he made a mistake, Sarah Newlin makes him watch the "Copulation" study. A male vampire prisoner is standing alone, when Sarah signals to bring in the female for the study. The female turns out to be Jessica. She asks the male prisoner's name and he replies his name is James. She then asks what they are supposed to be doing and James reveals they are supposed to have sex. Jessica doesn't want to because she doesn't know him and there is an audience. James says he won't do it because he "is a vampire and not a rapist". James states that Jessica is a good person and that she doesn't deserve this. Sarah instructs the guards to set a UV light on James. Jessica screams for it to stop and says they will do as they are told. She begins taking off her clothes and tells him that it will seem like she is a virgin, but she isn't. James refuses to have sex with her. Sarah has him burned over and over, before telling the guards to take both subjects back to their cells. As they are being taken Jessica tells James her name.("Don't You Feel Me")

Jason brings James into the conference room and Jessica asks Jason to leave them alone. Jason leaves and Jessica admits to James that before she came in the camp she did the worst thing in her life and then he burned instead of having sex with her and she asked him why. He told her he doesn't think he is a saint but he has managed to keep his humanity. He also reveals they broke his fang for not having sex with her but he says it's fine. Jessica reveals to James they are going to die in the camp and also to not drink the Tru Blood. They begin to talk about what they would do if they survive this. James says that he would visit his father and tell him what a good man he is. Jessica says that she wants to have sex with James because if she is going to die she wants to be with him and she has also never had sex with another vampire. They make love on the conference table.("In the Evening")

Jessica is laying in the conference room snuggling on the floor with James after having made love. They begin to talk and Jessica admits she doesn't want to go until someone catches them. James tells her she has given him a reason to live now but then asks her how she got the guard to bring him to her and she says she doesn't feel it's the time or place to talk about it and James agrees they may not have much time left so he doesn't want her spending it looking back. Guards come in and separate them and they take James back to the male general population. In the general population they begin giving out the Tru Blood and James grabs his bottle but does not drink it. Steve Newlin comes over with his bottle of Tru Blood and sits down next to him. Steve tries to introduce himself but James says he knows who he is. Steve admits he hasn't been this unpopular since he was in 8th grade and tells James about his very horrible battles with bullies in school. As Steve is about to drink the Tru Blood James takes pity on him telling him not to drink it because it is contaminated. Steve heeds his warnings but later caves and gives the information to his ex wife Sarah. She has both Steve and James placed in the white circular room. Later Violet, Jessica, Willa, Tara, and Pam were also found to know that Hepatitis V is in the Tru Blood and Jessica reveals to all vampires present that they are going to meet the sun.("Dead Meat")

Bill finds another empty general population and realizes he has no choice but to use his own blood to save the vampires. He finds a guard still alive and he has him take him to the white circular room. Sarah is walking upstairs to the top of the building holding Willa, Pam, Tara, Violet, Jessica, James, and Steve Newlin. She turns the mechanism to open the ceiling letting light into the building but as she does so Bill is already there feeding the group his blood. Eric, Jason, Ginger, and Dr. Finn find themselves in the next room watching the scene through the two way mirrors. Eric goes into the circular room and holds Steven Newlin into the sun before he can have Bill's blood. Before Steve meets the true death he screams out his love for Jason Stackhouse. The rest of the vampires are high from the faerie blood and relish their freedom in the sun. Pam goes into the other room and kills Dr. Finn.

Violet holds Bill thanking him for the gift of light as Pam dances with Dr. Finn's dead body and the other vampires dance and celebrate. Pam then asks if everyone should be dead and Jason realizes they haven't found Sarah Newlin and leaves as the other vampires exit the other way leaving Bill alone in the circular room.

The vampires make it outside and begin to destroy all of the contaminated Tru Blood. They show in other areas of the world such as Honolulu the Tru Blood is taken off the delivery trucks. Bill is in the circular as the Sirens tell him his time on earth has come to an end. Bill tells them he is not going anywhere and he did as he was asked so they should just leave before summoning Jessica. Jessica feels his pull and recalls that they left Bill behind. James accompanies her to find Bill. Meanwhile Eric goes back to the room where his sister Nora was injected with the Hep V and as the memories hit him he destroys the room in anger. Jessica and James find Bill and weakly explains that Lilith has sent her sirens to take him and James attempts to feed Bill his blood to restore him.

The vampires come to the exit of the camp when Jessica, James and Bill join them. Jason comes from the another direction and Violet sees him and claims him again as her own. As the rest of the vampires happily leave the camp in the sun. ("Life Matters")

James is seen playing volley ball in the sun with Jessica, Jason and Violet at Bill's house. He is later seen at the human and vampire social where he performs on stage. ("Radioactive")

He and Jessica are now living together, but Jessica remains distant. He meets Lafayette after he escorts him home following Tara's death. While in his house, James tells Lafayette about how he was turned, and feeds from him. They start to spend more together, and eventually kiss. Jessica discovers James's unfaithfulness when she catches him and Lafayette having sex in their car during Sookie's house party. James and Lafayette then start seeing each other, and are shown together in the finale.

James has all the common powers that comes with being a vampire. Due to him being made in the 1970's he is far stronger than younger vampires such as, Jessica, Steve, Willa and Tara. However, his strength is far below  that of vampires of an older age, such as Eric, Violet and Pam. He possesses self-control beyond his years: this is shown when he refused to have sex with Jessica, even under threat of torture.

His weaknesses include: stake to the heart, silver, sunlight, fire and decapitation. Also, the virus Hep V will slowly weaken and kill him if he should contract it.

After drinking the blood of Bill, he gained the ability to Daywalk that made him able to walk in the sun. However, his daywalking abilities were lost with Warlow's true death.

Retrieved from "https://trueblood.fandom.com/wiki/James_Kent?oldid=145051"
Community content is available under CC-BY-SA unless otherwise noted.