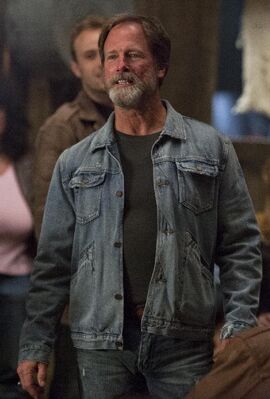 J.D. Carson was a werewolf on the HBO original series True Blood. Played by American guest starring actor Louis Herthum, J.D. makes his debut on the episode "Turn! Turn! Turn!" in the series' fifth season. A werewolf running in the Shreveport, Louisiana pack under packmaster Marcus Bozeman, J.D. is in a relationship with pack matriarch, and Marcus' mother, Martha Bozeman. There is tension between J.D. and Alcide Herveaux, and after Marcus' death J.D. becomes the new packmaster of the Shreveport pack. J.D. plays a recurring role through the series' fifth season, and, meeting an untimely demise in the Season 5 episode "Save Yourself", J.D. was seen one more time, in a flashback on the subsequent episode, "Who Are You, Really?", in the series' sixth season.

From what was seen of him in his later years, JD was aggressive, violent and addicted to V. His rise to packmaster and his leadership of the pack was vicious and immoral as he willingly condoned hunting humans to decide who was packmaster, as well torture vampires. Later on he forces V on some of the packmembers. Despite all this, Martha Bozeman said he was a good man once, as he was godfather to her son and mentor to him, it is possible that V is what changed him.

"Don't you bow down to him! You put a shifter before your own pack Herveaux. I will never bow before you."
―J.D. Carson, to Alcide Herveaux[src]

J.D. shows up with Martha Bozeman and the rest of her pack, when Sam Merlotte leads them to Marcus' body. Sam is about to be killed when Luna Garza and Alcide Herveaux shows up. Alcide tells them he was the one who killed Marcus. J.D. is angry, and those who have bowed to Alcide, he tells them to stand. He also tells Herveaux that he will not bow to him- which Alcide doesn't care. J.D. shifts to Were form and begins to eat Marcus' body with Martha. ("Turn! Turn! Turn!")

Alcide refuses to take over the pack leader position. Luna takes Sam home and Alcide leaves the pack to feast on the corpse of their dead leader. J.D. calls Alcide a coward and threatens to kill him if he sees him again. ("Authority Always Wins")

JD becomes packmaster but cedes control of the pack to the vampire Russell Edgington in exchange for his blood. The pack have been helping Russell to recover from being buried underground, capturing humans for him to feed on while he recuperates in an abandoned asylum. Nate, Woody and other members of the pack are involved in the alliance.

Alcide Herveaux learns of Russell's escape and helps the Vampire Authority to track him to the asylum. JD has his pack attack Alcide's party just as they find Russell. They are unsuccessful in defending him; Nate and Woody are killed and Russell is captured. JD escapes from his fight with Alcide without difficulty.

Alcide returns to the Shreveport pack's barn, where Martha's partner JD is messing around with one of the younger females. Alcide walks in and asks JD if Martha knows about this. JD then tells Alcide that him and Martha have an understanding about who they mess around with. JD tells Alcide that he isn't welcome because he chose not to be part of the pack. Alcide counters that he never left the pack and that he knows JD has been juicing on V. Alcide says he's taking on the role of packmaster to prevent JD from bringing down the pack. JD reveals that he has already been made packmaster. Alcide asks how and JD says that no one has challenged him. Alcide issues a challenge but JD laughs and says that he can't without a second to back him up. After a pause, Rikki stands up as Alcide's second. Alcide leaves JD with an instruction "Just tell me a time and place". ("Hopeless")

J.D. is in the barn again with his pack telling them that his vampire friend (Russell) told him there's going to be a war between the vampires and humans. J.D. believes Russell is right and tells his pack that the Shreveport pack should join the vampires. But in order to gain the pack's trust J.D. tells them that they have to drink Russell's blood. After one member takes a vial Emma to the side says she's scared. J.D. then tells her to drink a vial saying it will make her grow into a strong wolf. Martha then walks in and takes Emma telling J.D. "I don't know who you are anymore." This shows that Martha lost her faith and trust in J.D. ("In the Beginning")

J.D. and Alcide fight in the woods. J.D. gets the upper hand and is about to kill Alcide when the rest of the pack arrive on the scene. Martha convinces him not to kill Alcide, but J.D. tells Alcide to find another pack. ("Somebody That I Used to Know")

Russell greets JD and his pack at their barn. Russell bites his own wrist and the wolves flock to him for a drop or two. He notices Martha, who is holding Emma in her puppy form. When Martha says she'll never drink from Russell, he grabs Emma and gives her to Steve Newlin as his first pet. Martha is upset and desperate. JD tells Russell that he can't let him do this. Russell grabs him by the throat and asks him if he thought his blood was free. The vampires leave with Emma. ("Everybody Wants to Rule the World")

As the pack torture a captured vampire and drain his blood, Alcide, Jackson and Martha confront them. JD tells Alcide that he is abjured but Alcide attacks and beats him to death while the pack looks on. With JD dead, Alcide pronounces himself pack master and lays down the law to his pack. ("Save Yourself")

Retrieved from "https://trueblood.fandom.com/wiki/JD_Carson?oldid=143057"
Community content is available under CC-BY-SA unless otherwise noted.