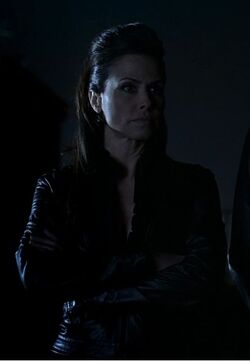 "They feel much more strongly than we do. Everything is urgent, exciting. Maybe because their lives are so temporary."
―Isabel Beaumont, to Eric Northman[src]

Isabel Beaumont is a vampire on the HBO original series True Blood. Played by American co-starring actress Valerie Cruz, Isabel makes her debut on the episode "Never Let Me Go" in the series' second season. A senior underling of Godric, during his tenure as vampire sheriff of Area 9 in Texas, Isabel plays a recurring role through the series' second season, and was last seen in the Season 2 episode "I Will Rise Up".

Isabel seems quite tolerant and even fond of humans, especially compared to some of her co-workers like Stan; her visible grief on learning that Hugo betrayed Godric and Sookie was a testament that she truly loved him. However, her deep personal loyalty to Godric represents a higher calling to her and is rivaled only by Eric and Nora's; she expresses deep gratitude to him when he spares Hugo's life and tries to shift the blame away from him when Nan Flanagan relieves him of his sheriff's duties.

Born in Castile in 1551 AD, Isabel was the granddaughter of the revered Isabella I, Queen of Castile. She was married off to several men in her youth, to form political alliances, however, her husbands always died within a year of the nuptials. Fed up with the limitations of her life, Isabel begged her French lover, a vampire, to turn her.

Isabel was involved in a relationship with a human named Hugo Ayres for undetermined time; as stated by Hugo, he had asked several times Isabel to turn him into a vampire so they can be together forever, but she refused.

"Of Course, so the Federal Government can bomb us back in to the middle ages!"
―Isabel Beaumont, to Stan[src]

Isabel was the vampire lover of Hugo Ayres and nest mate of Godric and Stan. Godric’s minion, Isabel is the first to suggest that Sookie and Hugo infiltrate the Fellowship of the Sun in order to get Godric back. ("Never Let Me Go")

Isabel, drops in on Bill and Sookie at the Hotel Carmilla with her human boyfriend, Hugo. He and Sookie bond over their mutual relationships with vampires as they prepare to infiltrate the Fellowship of the Sun. ("Hard-Hearted Hannah")

Eric asks Isabel what she likes about being with a human, and she says it is because their mortality makes everything in life urgent and exciting, but also says it is a sort of "science experiment" to see Hugo age into decrepitude. Isabel accuses Eric of coveting Sookie but he denies being interested in her. ("Release Me")

At the Dallas nest, Hugo is presented as the traitor to Godric. Finding that Isabel still loves Hugo, Godric spares his life and exiles him from Dallas. ("Timebomb")

After Godric is fired from his position as sheriff of Area 9, he recommends Isabel as his replacement. It is unknown if Isabel actually became sheriff. ("I Will Rise Up")

When Bill is kidnapped, Sookie contacts Isabel to see if she has any information regarding his whereabouts. ("Bad Blood")

Isabel has the common powers and weaknesses of a vampire such as superhuman strength, speed, and healing. Due to her age she is stronger than younger vampires such as Pamela Swynford de Beaufort and Jessica Hamby but far weaker than older vampires such as Eric Northman, Russell Edgington, Macklyn Warlow and Godric.

Isabel is a romance-given name. Related to "Isabella." The name established sometime around 400 B.C the name "Isabel" means "God's Promise.

Retrieved from "https://trueblood.fandom.com/wiki/Isabel_Beaumont?oldid=136924"
Community content is available under CC-BY-SA unless otherwise noted.