Eric makes a last-ditch effort to save an ailing Nora. A tragedy close to home forces Sam to ignore Alcide's warning and return to Bon Temps. Jessica shows her gratitude to James, a fellow incarcerated vamp, while an emboldened Sarah exacts a measure of revenge on Jason.

The episode begins with Eric returning to where he left Nora and Willa and announces to them that they are putting Hepatitis V into all of the batches of Tru Blood being made in the facility at Burrell's Camp, and it was not only being served to the vampires within the prison but some were also to be shipped out for public sale. Seeing he has no time to waste, he tells Willa she must stay at the camp and warn the others to not drink the Tru Blood and he carries Nora out managing to escape on a leaving contaminated Tru Blood Semi. Jason is there with the guards to put the place in lock down as they find that Eric has escaped. Willa, still disguised with the nurses jacket, walks through the camp using the nurses severed hand to use the doors. She finds Pam in solitary but she is not chained up and Pam admits its because the resident psychiatrist likes her. Willa tells her Eric sent her and told her to not drink the Tru Blood because it has Hepatitis V inside it and explains to her it's a new fatal strain. Pam tells her to tell only Tara and Jessica about the Tru Blood and no one else to make sure the humans don't realize they have caught on to their plan. Willa asks if Pam needs help getting into general population and Pam tells her to just get herself back to general population and she will get herself out of segregation. Willa leaves and dumps the doctor jacket and severed limb before sneaking back into general population.

Eric arrives at the Bill's house with Nora growing weaker in his arms. He admits he doesn't know what Bill is, but if he is god then he must save his dying sister. They take her to Jessica's room and lay her on the bed. Eric suggests that Bill feed her his blood but Nora refuses stating she won't drink another drop of Lilith's blood because of the damage it had done in the Authority. Bill cannot blame her but Eric demands it. Bill in the end states he will not go against her dying wishes. Eric tells Bill to leave him alone with his sister and Bill does as he is asked.

Sarah Newlin arrives at Burrell's house to find the front empty which was unusual. She walks to the backyard and finds Burrell decapitated and his entire guard dead. Sarah tells Burrell he shall not die in vain before calling over a senator she knows from having worked with him before. She proposes he gets his "fixing" man to come and cover up Burrell's death. She devised they claim there was an attack and that Burrell is now doing his work from a secure secret location. This way Sarah would have full control of the camp and the senator can take over Burrell's political side just long enough to have the hepatitis V strain spread through the vampire population which she predicts wont take long.

Sookie and Warlow lay naked in the sun on a plane of the Fae. Just having made love, Sookie realizes this was the first time she has made love in the daytime and Warlow says she just wrote their wedding vows. Sookie tells Warlow just because they had sex doesn't mean they are getting married. Warlow thought that Sookie had said yes to his proposal and Sookie says she doesn't think its just an infatuation but she also doesn't want to rush anything. She stands up when she hears crying. As she hears the person clearer, she realizes it's her friend Arlene crying from the earth realm. She tells Warlow she has to go help her friend because she fears something bad has happened but she will be back later. She uses her faerie magic to teleport back to the Bon Temps cemetery and finds Arlene crying her eyes out and she tells her that Terry has been shot and killed. Sookie asks her what happened and she explains falling apart and not knowing how she can tell her kids. Sookie tells her she is strong and she will get through this.

Sam calls Lafayette from a pay phone finding out that Terry has passed away. Sam knowing he has to go back to Bon Temps to pay his respects, he tells Nicole that she needs to call her mom because he has to go to this funeral even if it's not safe for him to go. She calls her mother and as they wait for her to reach the hotel, Sam takes a shower and Nicole later joins him. Later her mother arrives at the hotel and picks her up and Sam leaves for Bon Temps.

Jessica is taken by a guard to a conference room where she finds Jason there dressed as a guard. He tells her he is there to save her and hugs her tight. He admits he was there during the copulation study and it was sick but Jessica tells him he doesn't need to get her out of prison that she knows how it's going to end and she is okay with it. Jason tells her she will never suffer again but Jessica tells him that's not the world they live in and if there was anything he could do it would be to keep on living and perhaps one favor. Jason says of course he will do anything and she asks if she can see James because she would like to thank him for his kindness. Jason tells Jessica he will go get him.

Alcide drops his father Jackson off at his trailer. His father asks him to stay and warns that pack life isn't for either of them and one day he will realize it, but Alcide ignores his fathers warning. He returns to his pack and tells Rikki and the rest of them that Sam and Nicole were dead and Emma was with Martha. Rikki reveals they found Nicole and her mother so the entire pack of wolves know that Alcide was lying to them all. They begin getting aggressive and closing in on him.

Jason brings James into the conference room and Jessica asks Jason to leave them alone. Jason leaves and Jessica admits to James that before she came in the camp she did the worst thing in her life and then he burned instead of having sex with her and she asked him why. He told her he doesn't think he is a saint but he has managed to keep his humanity. He also reveals they broke his fang for not having sex with her but he says it's fine. Jessica reveals to James they are going to die in the camp and also to not drink the Tru Blood. They begin to talk about what they would do if they survive this. Then Jessica proposes having sex with James because if she is going to die she wants to be with him and she has also never had sex with another vampire. They make love on the conference table.

Eric confronts Bill in the daytime and asks him how he is day walking. Bill says he will explain later but Eric tells him he will do anything he asks if he just speak to him about what is going on and that he believes in him. Bill tells Eric of his visions of death for all vampires and he must stop it with Warlow's blood because he is both faerie and vampire and they can use the blood to walk in the daylight. Eric says he will do anything Bill says if he would first feed Nora his blood. Bill decides to at least try and Nora understand but she says it will not work. Eric thinks maybe Warlow's blood will heal her and Bill goes to get Warlow's blood.

Sookie and Lafayette arrive back at the Bellefleur house to find everyone sitting around somber with Arlene completely hammered drunk. Sookie sees Adilyn and recognizes her as faerie. They speak to each other telepathically before Holly's sons Wade and Rocky enter to give their condolences. Just as they are introduced Bill walks through the door. Shocked Andy clears out his daughter Adilyn, Portia, and the other children. Bill tells Arlene he is sorry for her loss and Arlene at first doesn't believe he is real because he is walking in the daylight. Bill then tells Andy he is sorry for his loss as well and fathers must protect their daughters. He then tells Sookie he must speak to her. They go outside and he tells her that she must bring him Warlow in order to save the vampire race and all her friends or blood will be on all their hands. Sookie fights at first but Bill admits he has more proof from Eric that there is a vampire death camp where all her friends are right now and she needs to bring him Warlow as soon as possible before leaving.

Jason is standing outside a room when Sarah walks up with some guards. She tells him the governor is dead so all the leverage he had on her is gone. The guards overpower him and grab him holding him down they cut him deeply in his wrist. Sarah then tells them to throw him into female general population. The guards throw him in and all the vampires immediately smell his blood. Tara sees Jason and stands in front of him telling all the other women to back off when Violet, who seems to run that area of the camp, claims that Jason is hers.

Eric is sitting beside Nora and he is praying for Godric to come and save Nora like he had before. Nora recalls that although Godric did make her, it was really Eric who saw something in her and saved her. It was 1665 in London when Eric was doing a favor for a king who wanted a certain woman at his beck and call, but she is too stubborn to be with him as he wants. What's worse is she is now helping people with the black plague which is highly contagious so he wants Eric to take her out of the situation and return her to him. Eric leaves for the quarantined part of the city where Nora was doing her work to help the ill. He asks for Nora but the man he meets tells Eric that he is too late and Nora has got the black death herself. Eric goes to see her and tells her that the king has sent him to retrieve her but Nora refuses stating her death would be her own. Impressed, Eric sees she is courageous, not stubborn as the king had said. He decides to take Nora to Godric and have him turn her. Eric begins to cry as they recall their past and Nora says it is as it was in the beginning but Godric is not there to save her this time. Nora tells Eric that he can find comfort in the rest of their family, and she is happy for the life he gave her. Then she gets a terrible look about her and Eric fears it is her time. Eric holds Nora and begs her not to die as she rapidly decays in his arms. Bill walks in and sadly looks at the inconsolable Eric holding the bloody remains of his sister. 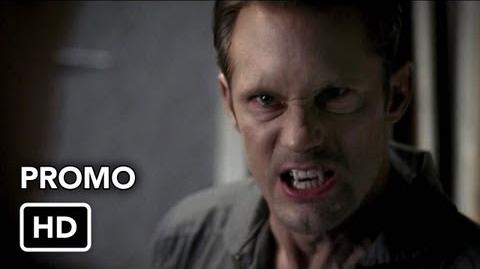 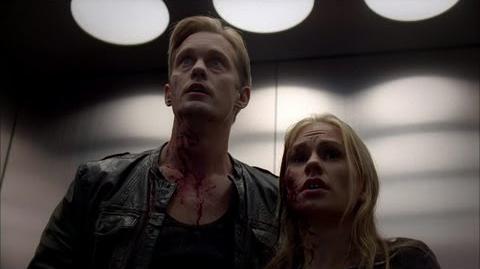