"In the Beginning" is the seventh episode of Season 5 of the HBO original series True Blood, and the series' fifty-fifth episode overall.

As Sookie embraces her human side, she considers a life without her faerie powers. Salome shows just where her true allegiance rests. Sam uses his sense of smell to locate the shooters. Alcide gets ready for a fight. Lafayette searches for Jesus' body. Hoyt finds himself a new group of friends.

"Save her, my son."
― Godric's ghost, to Eric Northman (on Nora Gainesborough)

Russell, having just killed Roman, tackles Eric and quips, "Me and you together at last." Eric bares his fangs and Russell reciprocates. The lights brighten and blink on and off. AVL guards swarm into the room. They use night vision to catch Russell using a silver net. He is taken back to the cells. When everything settles down Bill finally locates Eric hung up on the wall by his neck. Eric says dryly, "The view from up here is spectacular."

At the faerie club Hot Wings, Claude and Claudette tell Sookie that since she is only halfling, her magic is finite. They warn that if she isn't careful how she uses it, it will run out and she will no longer be faerie. Sookie is intrigued by the possibility of finally being human.

Deputy Ellis questions Andy at the scene of the shooting of the Stake House clerk Junior. Sam sniffs around for clues in the back of the store. Deputy Jones stands by, watching him quizzically. Sam's acute sense of smell draws him to a strange box. He tells Kenya to open the box because she is wearing gloves. When she does so, they find it full of the Obama masks the anti-supernatural murderers have been wearing. Sam rolls on his back on the floor sniffing. He tells Kenya about the shooters' poor diets and lifestyles. Kenya is concerned and asks Sam if there's anything she should know. Sam looks up sheepishly and says "...no." 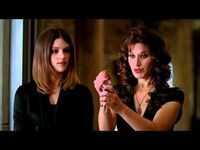 Hoyt is brought to the shooters' hideout. He knew some of them when he was younger and says that he feels a kinship to their cause. One of the men gets a call from somebody named "Dragon" and leaves the room. The guys ask him about Jessica and vow to hate her along with him. The call was about Junior being killed and the news enrages the group.

Bill and Eric realize that they were being used to bring Russell to the Authority so that he could kill Roman. They try to find out why Russell's restraints failed, believing that intravenous silver would have rendered him unable to kill Roman so quickly. They also question the iStake malfunction. Molly, the iStake technician, has no explanation and is in the process of trying to find out.

They are called to meet with Salome and the newly freed Nora in Salome's room. Nora tries to talk to Eric but, feeling betrayed, Eric tells her to "shut the fuck up." Russell joins them and claims them he has been reborn. Nora tells Eric that she tried to save him because she knew about Russell but he continues to ignore her. Salome admits to digging up Russell because he was the only vampire powerful enough to get rid of Roman. She says that they're interested in sharing their power with everyone and want them to join their cause. Neither Eric or Bill are interested. Salome invites them to a ceremony taking place the following night.

Alcide and Rikki train for his challenge with J.D. in the barn. Alcide tells Rikki he is prepared to lose the fight. Rikki suggests using vampire blood, but Alcide rejects the idea. The two of them begin fooling around and kissing. Martha walks in and tells Alcide that J.D. has denied taking V. She tells Alcide that it is "J.D.'s turn" to be alpha because J.D. had enough respect to allow Marcus to step up after his father died.

Arlene watches her wedding video at Merlotte's. She enjoys the messages her friends and family recorded for her. She sees Terry kissing her pregnant belly and weeps. Arlene thinks Terry is crazy and that they'll never recapture that point in their relationship. Holly thinks there is a chance that the Ifrit is real and encourages Arlene to have faith in him.

Jason makes Sookie breakfast in their childhood home. They talk about what they've learned. Jason finds out that Sookie feels responsible for their parents' death because it was her blood the vampire was after. Jason tells Sookie that it was not her fault.

Andy pays Sheriff Bud a visit, worried that he's not doing a good job. Bud is with his mistress, Sweetie Des Arts, and blows Andy off.

Lafayette goes to Jesus' family home in Mexico. He finds Jesus' head displayed on a chair inside. Jesus' grandfather Don Bartolo holds Lafayette at gunpoint and says that his family is taking back what belongs to them.

In the hospital Sam tells Luna about his discovery. Luna says she needs to be out there helping but Sam argues that it's safer in the hospital. Sookie drops by with gifts for Luna. Sam then tells her what's been happening and Sookie offers to buy Sam coffee. Sam thanks Sookie for the coffee and they sit and talk in the lobby. Sookie shares with Sam the chance of her becoming human if she uses up all of her magic.

Tara's mother, Lettie Mae, goes to see her at Fangtasia. Tara is no longer working as a bartender but as a pole dancer and is very good at it. Pam watches her from the stage smiling. Lettie Mae tells Tara that as a minister's wife, she can't have a daughter who is a vampire, and that she's there to say goodbye. Tara shows her fangs and Lettie Mae tells Tara she's not afraid for she has Jesus Christ at her back. Pam watches, interested, from the side and Tara tells her mother that she'll see her again and lets her leave.

Russell addresses the assembled vampires at the ceremony. He disavows his previous statements and says that he loves Lilith. Nora talks about the view that vampires have evolved from humans. She announces that everybody present will drink from Lilith's blood that night, gesturing to the vial on the dais. Chancellor Dieter protests that this is blasphemy. He says he has been part of the Authority since Roman founded it and that he will not go along with any of this. Before Dieter can finish, Russell decapitates him. Russell apologizes to Lilith. Everyone is silent. Bill asks Eric if they're really going along with it, and Eric agrees saying they'll go with the flow.

The vampires who drank from Lilith wander around town in an intoxicated state, intimidating humans in the French Quarter of New Orleans. They descend on a private karaoke party/wedding rehearsal, Russell appears on stage and the guests freak out. The other vampires zoom into the room and attack the guests.

Pam tries to console Tara who is crying in her office. She's feeling down about her mother Lettie Mae. Tara says that she hates her mother but yet she's crying for her. Pam comforts Tara and tells her that Lettie Mae is not Tara's mother anymore. Tara looks up at her vampire mother Pam and quickly hugs her. Pam hugs her back then after a few seconds Pam says that's it and tells Tara to get back on the pole as she's very good at dancing.

Bartolo sews Lafayette's mouth shut and ties him to a chair. He begins a ritual involving his wife's pregnant belly. Just before Bartolo can strike Lafayette down, Maria jumps up from behind him and stabs him to death. She then cuts Lafayette free.

J.D. assembles the pack at the barn and tells them about his vampire friend (Russell). J.D. announces that Russell foretold an End of Days. J.D. thinks the pack should ally with the vampires. He challenges them to prove their acceptance by drinking Russell's blood. A female werewolf gives in and says okay to drinking a vial. Emma says that she's scared and J.D. says that the blood will make her a big strong wolf. J.D. hands Emma a vial of blood just as Martha arrives. She says "I don't know you anymore" and takes Emma out of there.

Hoyt joins the guys on their next mission. Sam sits next to Luna's hospital bed as she sleeps. Nurse Hastigan tells Sam that he has to leave because visiting hours are long over. Sam agrees but as he is leaving the hospital he catches one of the shooters, Joe Bob, posing as an orderly. Sam chases him and tackles him in an empty room. He tells him "this is for my friends," and punches him in the face.

The Ifrit appears to Terry and Patrick, mocking them with laughter. Terry yells at the monster to come back and then tries to kill himself, grabbing Patrick's gun and putting it to his throat. Patrick talks Terry down and retrieves the gun.

Jessica is at home feeding on a man while a drunk Jason stops by. Jason tells her about his parents being killed by a vampire and says that he's going to find out who did it. Jessica supports him and tells Jason that not all vampires are alike and that she is good. She kisses him and Jason pulls away, tasting blood. He asks if she has been feeding on someone. Jessica apologizes and says she didn't expect to see him tonight, but Jason is pissed and yells at her partner to come downstairs. The guy walks out and Jessica tells him to go back in the room. Jason yells that she's no different from the vampire that killed his parents. Jessica calls Jason a hypocrite, and angrily bites his neck. Jason shoots her in the head to make her stop. Her guards run in asking if everything is okay, aiming their weapons at Jason. Jessica is furious he shot her. Jason challenges that she will heal, which she does. Jason says that he will heal too and wipes Jessica's blood off his jacket over his bite wounds, proving his point. Jessica shouts at Jason "get the fuck out of my mansion!" He responds "Gladly!" and leaves.

Sookie walks into her front yard, musing on the knowledge the fae gave her. She repeatedly triggers her faerie light, trying to drain her powers and become human. Jason sees the light and rushes to stop Sookie.

The vampire group are finishing off the human guests when they all look toward the stage and see a drop of blood hit the ground. Lilith manifests as a nude, blood-drenched woman. The apparition walks over to Nora and expels a red mist from her mouth. The mist hits Nora, further increasing her bloodlust. Nora smiles as she continues to feed from the human. The others are similarly affected. Godric's spirit suddenly appears to Eric. Godric tells Eric that he knows what he's doing is wrong, but his sister Nora does not. Godric instructs "Save her, my son." Eric stops feeding and looks at Nora, who is staring at the empty space where Lilith was supposed to be. 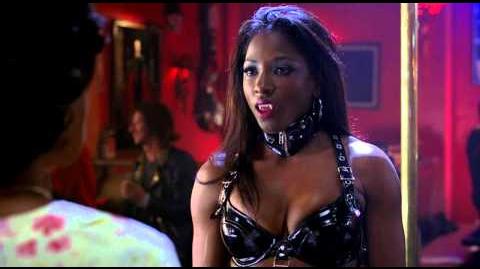 Retrieved from "https://trueblood.fandom.com/wiki/In_the_Beginning?oldid=144852"
Community content is available under CC-BY-SA unless otherwise noted.