I Smell a Rat

"I Smell a Rat" is the tenth episode of Season 3 of the HBO original series True Blood, and the series' thirty-fourth episode overall.

A reluctant Bill warns Sookie about the dangers she will face. Jesus is intrigued by the mysterious qualities of V. Sam’s recent fit of rage triggers dark memories. Eric takes precautions and fulfills a wish; Arlene turns to Holly for help with a pressing problem; Jason deals with the unexpected, both with Tara and Crystal; Jessica is torn between Tommy and Hoyt. After communing with Talbot, Russell promises to extract vengeance on his enemies.

"If I meet the true death without at least kissing you, Sookie Stackhouse,
that will be my biggest regret."
― Eric Northman

Bill reveals to Sookie that she is a faerie. While she is mostly human, it is likely a faerie "coupled" with one of her female human ancestors. The reason Claudine thought Bill would take her light is that many supernaturals believe the "Fae were wiped out of existence by vampires." A stunned Tara tells Jason they need to bury Franklin's remains. She has him put Franklin's clothes in his truck and she kicks dirt over what's left of him. Lafayette has Jesus carry a near-dead Calvin up to his porch rather than drive another 20 miles to the closest hospital.

Sam returns home after beating up Calvin. He pours some sour mash whiskey on his knuckle, takes a pull and remembers an instance in 2003 when he used his shifting to steal jewelry. While he and a woman celebrated his latest score, a man sneaked in and pointed a gun at Sam's head. The woman had been playing Sam. The man knocked Sam over the head with his gun and they left him on the floor. Bill tells Sookie faerie blood is intoxicating to vampires and he believes it is the reason he was able to be in the sun without burning.

Bill assures Sookie that he loves her, and is not with her only because of her unique blood. Believing he will soon be killed by Russell, Eric updates his will and leaves everything to his progeny, Pam. Yvetta is furious to learn she is getting nothing and Eric responds that she means nothing to him. Lafayette gives Calvin a tiny bit of vampire blood and he is instantly fine. Calvin jumps up and immediately yells at Crystal for allowing Lafayette and Jesus to give him "vamper juice."

He slaps her and walks off. She catches up to him, and he tells her they aren't supposed to mix and Jason would "freak out if he knew what you really are." She is adamant she won't go back to Felton. Bill watches a TV report that vampire-human relations are falling to pieces because of Russell's on-air murder of the TBBN newscaster, Jerry McCafferty. Eric shows up at the door and tells Bill he knows Sookie is a faerie. Eric wants to know if Sookie's blood let him walk in the sunlight and Bill downplays its effects.

Eric says Sophie-Ann will be disappointed to learn faerie blood only temporarily saves vampires from the sunlight. He tells Bill about killing Talbot. Sookie walks up and Eric tells her she shouldn't trust Bill and that he, Eric, "won't be around much longer anyway." Jessica lashes out at Arlene for her continued bashing of vampires. Tommy comes to Jessica's defense and attempts to kiss her after asking about Hoyt.

She pulls away. While parked in his truck, Summer tells Hoyt that she thinks they should have sex to bring them closer. He looks horrified. Tara and Jason come back to Jason's place covered in blood and find Sookie and Bill there. Tara is angry to see Bill. Bill leaves, beckoning Jason to follow him out. He does. Meanwhile, Tara reveals to Sookie that she was abducted, held captive and raped by Franklin at Russell's, and that Bill did nothing to help her. Tara swears she will not forgive Bill or trust any vampire.

Before he leaves, Bill speaks to Jason on the front porch. He makes Jason swear to protect Sookie during the daytime, and that he must be prepared to confront werewolves. Having witnessed Calvin's fast recovery, Jesus is fascinated by the effects of vampire blood. He wants to try some with Lafayette and eventually talks Lafayette into drinking a few drops. The next day everyone at Merlotte's is terrified of Sam. Holly offers Sam some herbs, black cohosh, to calm him down, explaining that she's a Wiccan.

Sam tells her that he only has two rules in his bar: No dancing and no religion, so she gently backs off. Then he announces to his wigged out staff that Calvin is okay, and that they don't need to be afraid of him. Tommy tells Sam he was proud of his big brother. Arlene tells Terry the baby is not his. She thinks it will be evil and doesn't want it. After a few moments he tells her that he will raise the child like it was his own. Later Arlene takes Holly aside and tells her she wants to hear more about the "other ways" that she can take care of her situation.

Holly smiles. Jason tells Sookie about killing Eggs. She convinces him he has to tell Tara. Lafayette and Jesus experience V Hallucinations and connect on a spiritual level after taking the vampire blood. Together they "see" several people from their past, including Jesus's grandmother, who was a very powerful healer, and one of Lafayette's ancestors, a conjurer. Lastly we see a vision of Jesus's grandfather, Don Bartolo, who looks very sinister and is putting pins in a voodoo doll.

Jesus reveals that he used dark magic and had big plans for Jesus. His grandfather, Don emits a primal howl that awakens Lafayette and Jesus from their spirit walk. Sookie has a dream about kissing Eric, and wakes up suddenly. Jason goes to talk to Tara. Before he can tell her about Eggs she thanks him for saving her from Franklin. This turns into them kissing briefly. She gets up, convinced that she is an emotional wreck. Before she leaves the room Jason blurts out that he killed Eggs.

She says nothing and leaves, looking horrified. Jason starts after her, but notices Sookie is gone. Then he sees a note from Sookie saying she has gone out. Someone burns a cross on Bill and Jessica's front lawn. Jessica wants to hunt them down, but Bill convinces her that now is not the time for revenge. Sam has another flashback to '03 where he shifted into a beagle to sneak up on the couple that stole from him. Shifting back to human form, he picks up the man's gun, takes back the cash and the jewelry he stole with the woman's help, and kills both of them.

Sookie shows up at Fangtasia to see Eric. She wants to know why she shouldn't trust Bill. He responds by telling her his biggest regret would be to meet the true death without kissing her, so he does. They make out for several seconds. She asks again about Bill and Pam comes to the door and deadpans, "Blah blah blah, vampire emergency, blah." Outside she tells Eric they should give Sookie to Russell in order to save Eric. Still carrying Talbot in a jar, Russell picks up a male prostitute named Tony who resembles his lost love.

Hoyt comes to Merlotte's and tells Jessica he's broken up with Summer. Hoyt loves her and says that if she tells him she isn't in love with him he'll leave her alone. She says nothing and he walks outside. Tommy walks up to him and Hoyt quickly punches him in the face. Tommy turns into the pit bull and attacks Hoyt. Jessica rushes outside and hurls dog-Tommy into the woods. She sees Hoyt has a nasty bite on his arm and forces him to drink her blood. Bill comes in and is furious with Jason for letting Sookie out of his sight.

Eventually Jason gets mad at Bill and rescinds his invitation to Jason's house. Bill slides backwards out of the home. Upstairs Jason finds a black panther in his room. The panther shifts form and becomes Crystal. After sex with Tony Russell is talking to him as if he is Talbot. He seems upset that he wasn't there when Talbot met the true death. Russell then plunges a stake into Tonys' chest and, envisioning him as Talbot, says goodbye and curls up next to the corpse.

Eric returns to the office, grabs Sookie and drags her into the basement. Bill senses this and heads to her. Eric places Sookie in a neck shackle as the episode ends. 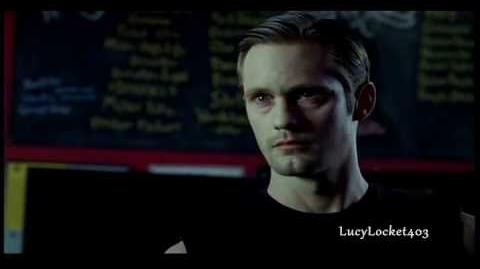 Bill Compton: (to Sookie) "Every supernatural I have ever met believes the Fae were wiped out of existence... by vampires."