I Got a Right to Sing the Blues

"I Got a Right to Sing the Blues" is the sixth episode of Season 3 of the HBO original series True Blood, and the series' thirtieth episode overall.

Spurned by Eric, Sookie fears the worst for Bill, whose fate now lies in Lorenaʼs hands; fueled by a night of bloody passion, Tara executes a desperate plan to stave off Franklinʼs advances; in Bon Temps, Tommy finds it difficult to leave the family nest; Jessica puts Pamʼs teachings into practice; Jasonʼs romance with Crystal hits a snag, as does Lafayetteʼs with Jesus; after revealing his master plan to Eric, Russell visits Louisiana to put it into action.

Sookie and Bill are forcibly dragged back to Russell's mansion.

Eric and Lorena are there to greet Russell and crew at the door. Eric is unwilling to help Sookie, as he has other things brewing now that he knows Russell killed his family. He pulls Sookie off into another room after Bill is sent to slave quarters to be killed by Lorena. Lorena is not happy about that order, of course.

Now it's time for Russell to interrogate the mysterious Sookie. She is adorably clueless and frightened in this scene, "Are you the king of all vampires?" Russell is slightly amused by her ignorance. He also seems to relish telling her that Bill has been keeping a secret file on her. He wants to know what she is, but she doesn't know herself. "Maybe I'm an alien!" We do learn, however, that her grandfather was also telepathic.

Meanwhile, Tara is trying to play Franklin so she can escape. Time is running out, as he plans on turning her into a vampire soon. So, she seduces him and bites him to gain strength. It's pretty heinous, but he's into it, of course.

Back in Bon Temps, Sam is still trying to figure out what is going on with the Mickens family. He is concerned about Tommy, which prompts their mother, Melinda to tell Tommy, "Sam may be blood, but he ain't family." It seems that the family has been making money by shifting into dogs and fighting in the ring for money. Tommy's mom used to do it but can't anymore and now Tommy is being relied on for it. That's where he gets the scars. Sam eventually figures it out and heads off to save Tommy.

At Merlotte's, Jessica accidentally shows her fangs to Arlene, which makes Arlene's vampophobia even worse. Jessica comes to the rescue, however, when a rude customer named Peach refuses to finish up her meal at closing time. Jessica glamours her into leaving, giving Arlene a huge tip and excusing herself to the ladies' room - where Jessica feeds off her. Arlene doesn't see Jessica feed, but she definitely suspects something and is spooked.

Lafayette continues his date with Jesus, going parking with the handsome nurse. He's hesitant to get close to Jesus, but decides they can relate when he finds out Jesus was raised by a single mother. They have a nice make-out session and get close to sealing the deal at Lafayette's house when rednecks from Hotshot show up and trash Lafayette's new sports car. This is all about the V Lafayette wants them to sell for him. When Jesus hears all this, he's out, as he does not want to get involved with a drug dealer.

Meanwhile, Jason is still having fun with Crystal at the lake. She's a bit odd, but it seems to be from her strange upbringing in Hotshot. She's a bit naive about things and just wants to enjoy Jason for the night. However, their lakeside tryst is cut short when Crystal hears (sniffs?) something in the woods and runs off.

Later, Jason shows up in Hotshot with flowers for Crystal. One of the rednecks who was pounded by Lafayette opens the door and turns out to be Crystal's fiancée, Felton Norris. She tells him she's never seen Jason before in her life, but it clearly pains her to say that.

In New Orleans, Queen Sophie Anne is busy scratching lottery tickets in her mansion. Probably won't end her money woes, but "mama's feeling lucky." In comes Russell, who has just killed Sophie's guards. He proposes marriage to her again and she refuses, only to be strong-armed by both him and Eric. Eric carries Sophie off for Russell as she calls out for her beloved Hadley.

Back at Russell's mansion, Tara now has Franklin's blood in her and she makes her escape, but not without bashing Franklin's head in with a mace first. She runs out of the room and heads over to save Sookie from another bedroom. The two fight their way out, but Sookie needs to stop off at the slave quarters for Bill first.

While Tara looks around the yard for a way out, she runs into a white wolf. She shrieks, but it is merely Alcide. He's here to save the day. Tara asks him if he has a car and he says yes. In the slave quarters, Sookie finds Bill barely alive, as he has been tortured by a sobbing Lorena. When Sookie is about to free him, Lorena goes for Sookie's jugular. The last thing we see is Sookie screaming. 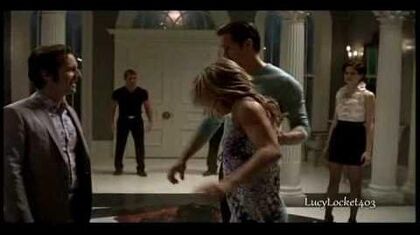 Arlene Fowler: "Please don't kill me, I'm pregnant. (gasps) That probably just makes you want to eat me even more."

Franklin Mott: "You have no idea what awaits you on the other side, my beautiful bride. No more pain. No more fear. No more...rules."

Melinda Mickens: "You can't trust Sam. He may be blood, but he ain't family. And he ain't never gonna be. He looks down on us, thinks he's better than us."

Sookie Stackhouse: "What the hell are you doing?"
Tara Thornton: "Killing vampires and saving your ass. I'll fill you in later, now let's get the hell out of here."