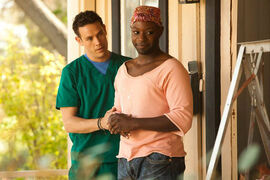 Humans are a race of sentient beings who are members of the species homo sapiens. On the HBO original series True Blood, humans are both a food source as well as a means of pro-creation for vampires, who reproduce by performing a ritual that will transform a human being into a new vampire. Humans make up for the majority of the earth's population, and are commonly noted for their desire to influence and understand their environment by seeking to explain and manipulate phenomena through mythology, philosophy, religion, and science. They serve as the base for supernatural beings such as vampires, werewolves, shifters and halflings.

The dominant species of sentient beings on earth, humans are characterized by erect posture, bipedal locomotion, manual dexterity, increased tool usage, and the ability to make conscious, rational decisions. They are known to be generally peaceful and reasonable when respected, but will become violent and hateful, if they feel threatened. They are naturally distrustful towards creatures that have been known to prey on them, such as vampires and werewolves.

The primary abilities of every human being include adaptability and versatility. For the most part, humans are physically outmatched by supernatural beings and are most often defeated whenever confronted by a more dangerous creature. However, some humans have been known to utilize tools and weapons (including magic in some cases) and have managed to succeed in a supernatural combat. Therefore, as a means of survival, most humans must rely on intelligence, research and teamwork in order to prevail. Humans also vastly outnumber any other species.

Due to the fact that humans are commonly noted for their tendency to fear the unknown, since the Great Revelation, many humans have formed hate-groups and have made a habit of hunting and killing all supernatural beings, especially vampires. Generally, these hunters use advanced knowledge of supernatural creatures to hunt, identify and eliminate any and all perceived threats to humanity or "abominations." They are adept at modifying conventional human weaponry, such as guns and knives, to repel and/or kill supernatural beings that are otherwise more powerful than they are.

Humans who employ magical powers are known as witches. While most witches are known to channel their power from the forces of nature, some witches, such as brujos, draw their power from darker sources such as demons. While all humans have access to magical forces, many do not practice magic based on the fact they either do not believe in magic, have been taught that magic is Satanic, or they fear the supernatural consequences that comes with it (i.e. black magic is known to corrupt the practitioner to point where they will become evil and remorseless monsters). Nevertheless, humans who have great command over magic have proven to match, or in the case of Antonia Gavilán, outmatch other supernatural beings.

While humans may choose to become witches, certain humans are born with innate supernatural abilities. They can be born as Halflings, Shapeshifters, or Werewolves. Humans possessing these abilities tend not to discuss their abilities with others, leaving most humans to disbelieve in the existence of supernatural forces.

Because most humans are born without supernatural powers or strengths, many supernatural creatures, particularly vampires, have a strong tendency to underestimate them. This often proves to be a fatal mistake, as humans can still be very dangerous when sufficiently provoked. Some of the wiser and more advanced vampires do possess a certain fear and respect for their human counterparts.

Despite having been born human themselves, many vampires still cling to their ancient tradition of viewing humans as nothing more than a source of food and reproduction. However, this ideology is quickly waning, as vampires are rapidly adopting mainstreaming. Humans are physically much weaker than vampires and exhibit none of the enhanced senses, healing, speed, or other abilities. Unless the human is equipped with silver, a wooden stake or wooden bullets, the vampire will almost always win in a physical confrontation. Humans are converted into vampires when a "Maker" feeds from the human, then forces the human to feed from them. Once the sharing of blood is complete, the vampire will bury themselves in the ground next to the human, which will cause the human to awaken as a vampire the next night.

Faeries often mate with humans, leaving the human to raise their halfling spawn. According to Bill Compton, male faes have been known to rape human females, impregnating them with halflings. Hidden amongst the human population are several faerie/human hybrids, many of whom do not know what they are. Halflings are often confused as being normal humans gifted with unnatural powers, rather than being a hybrid species.

Werewolves tend to shy away from humans, and some of them are frightened of what will happen should humans ever discover them. Some werewolves will hunt humans for sport, although many of their kind disagree with this practice.

Humans are vulnerable to death by any typical means in which a human can die. Humans are also vulnerable to almost any supernatural being, as well as being vulnerable to their own weaponry. Below is a list of common vulnerabilities.

Mortality - Their physical strength wanes once they reach old age. They are vulnerable to diseases, and any form of physical harm.
Magic - Like all beings, humans are susceptible to the influences of magic and witchcraft.
Mental health - Humans generally react with fear, confusion and disbelief when confronted with the threat of the supernatural. They often seem emotionally scarred by their experiences and generally seem reluctant to talk about their past experiences.
Lack of supernatural senses - This prevents most humans from detecting and/or identifying sources of harm from the supernatural world before it's too late.
Supernatural beings - Any other creature with supernatural powers can potentially kill humans.
Transformation/turning - Humans will be susceptible to a "darker nature" once they have been turned into a vampire (although many manage to overcome this). Those born with supernatural abilities such as halflings, shapeshifters, or werewolves, generally possess altered states of humanity.

Retrieved from "https://trueblood.fandom.com/wiki/Human?oldid=145070"
Community content is available under CC-BY-SA unless otherwise noted.