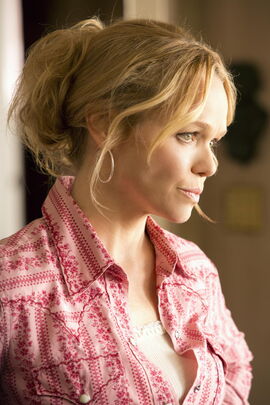 "Usually I just light a candle and ask the spirits to make sure my boys don't end up in jail or knock somebody up. So far that's worked out okay."
―Holly Cleary[src]

Holly Cleary (née Darwin) is a wiccan on the HBO original series True Blood. Played by American starring actress Lauren Bowles, Holly makes her debut on the episode "Night on the Sun" in the series' third season. A witch and waitress at the local hangout, Merlotte's Bar and Grill, she is the first witch to appear in the show. Playing a recurring role throughout the series' third, fourth, fifth, sixth and seventh seasons, she has two sons, Wade Cleary and Rocky Cleary. Currently engaged to Andy Bellefleur, sheriff of Renard Parish. Holly was last seen in the series' finale episode, "Thank You", in the series' seventh, and final, season.

Holly is loving, supportive and a very devout Wiccan. In one of her first scenes, she is seen comforting Arlene who has just discovered her unborn child is the son of the serial murderer Drew Marshall a.k.a Rene. She has immense love for her children and every living and non living thing, she eventually becomes involved with local sheriff Andy Bellefleur.

She performs a ritual to possibly abort Arlene's baby by herself. While being held hostage by Marnie, Holly had the insight to cast a spell with Tara that would break the entrapment spell cast by Marnie & Antonia. On Halloween of 2009 Holly (with the help of Sookie and Tara) created a mystical barrier so strong as to repel the combined power of Lafayette possessed by Marnie harnessing the power of Jesus' demon, making her perhaps one of the most powerful witches in Bon Temps.

It is not clear if Holly's potency as a witch stems from raw power or her experience and level-headedness; in either case, she has proven herself able to deal with the strange doings going on around Bon Temps with much greater competency than any of the other witches encountered.

Holly Cleary: "I knew it was in here somewhere." Sookie Stackhouse: "You carry salt in your purse?" Holly Cleary: "Yeah, and sage and a lock of my aunt Josie's hair. It's like a Wiccan first aid kit."

Sookie Stackhouse: "Have you ever done anything like this before?" Holly Cleary: "Goddess no, usually I just light a candle and ask the spirits to make sure my boys don't end up in jail or knock somebody up. So far that's worked out okay."

Holly Cleary: "You realize I'm a witch, right? My kids are delinquents. I live in a motel." Andy Bellefleur: "I live with my grandma. I'm an alcoholic and a recovering V addict."

Holly Cleary: "Hey, next time you're in Merlotte's I'll buy you a cheese burger." Andy Bellefleur: "You mean like a date?" Holly Cleary: "Oh, I wasn't exactly thinking that because my house almost burnt down and all."