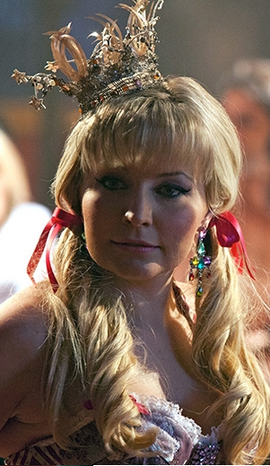 Hadley Hale is the cousin of protagonist Sookie Stackhouse and her brother Jason on the HBO original series True Blood. Played by American guest starring actress Lindsey Haun, Hadley makes her debut on the episode "Frenzy" in the series' second season. Hadley is a waitress at the faerie nightclub Hot Wings. Playing a recurring role through the series' second, third and fifth seasons, Hadley was last seen in the Season 5 episode "Hopeless".

No one had heard from Hadley since she ran away from rehab, which Gran paid for. However, Bill ran into her at Sophie-Anne Leclerq's residence. Hadley stated she owed her grandmother a lot of money and was reluctant to get back in touch. Bill suggested it would be best not to in order to spare her finding out about her grandmother's murder. She asked Bill to tell her cousin, Sookie, she said "Hey" to which Bill agreed to while smiling. ("Frenzy")

Hadley is brought by Eric in front of a caged Sophie-Anne. Eric threatens the Queen that, unless she tells him why she is interested in Sookie, he will drain Hadley of all her blood. The queen denies knowing anything about Sookie, and Eric proceeds to violently feed on Hadley. A weak Hadley whispers in Eric's ear the information he wanted and Eric seems surprised and says that he wasn't expecting that. Sophie-Anne looks worried and Eric feeds her his blood so she can recover. ("Hitting the Ground")

Hadley, along with Sophie-Anne, moves into the Edgington mansion. There Eric threatens her into going to Sookie and delivering a warning. While visiting Sookie, Hadley finds out about the death of their grandmother and before leaving apologizes. Sookie reads Hadley's mind and finds out that Hadley was the one who informed "them" (the vampires) about her. ("Night on the Sun")

Days later Hadley calls Sookie and the two women meet in an aquarium in Monroe. Hadley admits to having told Sophie-Anne about Sookie's powers and asks her to speak to her son, Hunter, to discover if he shares Sookie's powers. Once Sookie confirms that Hunter is a telepath, Hadley takes him away with the intention of hiding him from the vampires. ("Everything Is Broken")

Jason runs into Hadley in a fairy burlesque party. She lets it slip that vampires, not drowning, killed his parents. Before he can question her further she runs from him and he and Andy are expelled from the fairy party onto an empty field. ("We’ll Meet Again")

Jason brings Sookie to Hot Wings. They quiz Claude, Claudia, Claudette and Hadley inside the faerie club. Sookie asks if it's true that vampires killed her mother and father. Claude says that he only knows what Claudine told him: an unknown vampire ambushed their parents because he was drawn to something he smelled in the back seat of their car. In a flashback, Sookie's parents stop their car on a bridge so they don't hit a man standing in the middle of the road. The man rifles through their backseat, finding a bandage with Sookie's blood on it. Sookie angrily says that she doesn't believe Claude. She tries to manifest her photokinesis but it fails, and a group of faeries in the bar shoot their own beams at her as she screams. ("Hopeless")