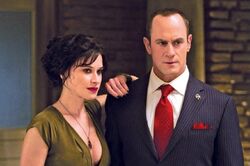 Guardian refers to the guardians of the blood of Lilith on the HBO original series True Blood. Known singularly as The Guardian, the Guardians not only guard the blood of Lilith, they are in control over the American Vampire League, and are the leaders of all vampires in North America.

There are two known Guardians of the Authority, Roman Zimojic and Salome Agrippa.

They are the guardians of the blood of Lilith and they are in control over the American Vampire League. The Guardian is the leader of the North American Vampires. They can pass laws, and pretty much do as they please.

It's a known fact that the older the vampire you are, the stronger you are. Ideally, a vampire should be older than the Authority Chancellor, but in Roman Zimojic's case, he wasn't. There were older vampires in the Vampire Authority, but Roman was probably the second youngest, with Salome Agrippa being the oldest.