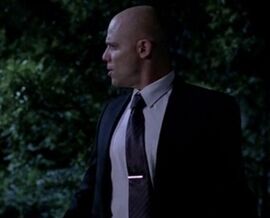 Gondry was a vampire guard on the HBO original series True Blood. Played by American guest starring actor Matt Bushell, Gondry is a guard for the Vampire Authority who meets an untimely demise during his only appearance, on the episode "Sunset", in the series' fifth season.

Gondry was one of the two vampires who escort Jessica by order of Bill to ensure that she turns Jason into a vampire. Jason pretended to be dead after being bitten by Jessica. He then shot to Gondry and his partner Lambert, destroying them. ("Sunset")

Retrieved from "https://trueblood.fandom.com/wiki/Gondry?oldid=145272"
Community content is available under CC-BY-SA unless otherwise noted.